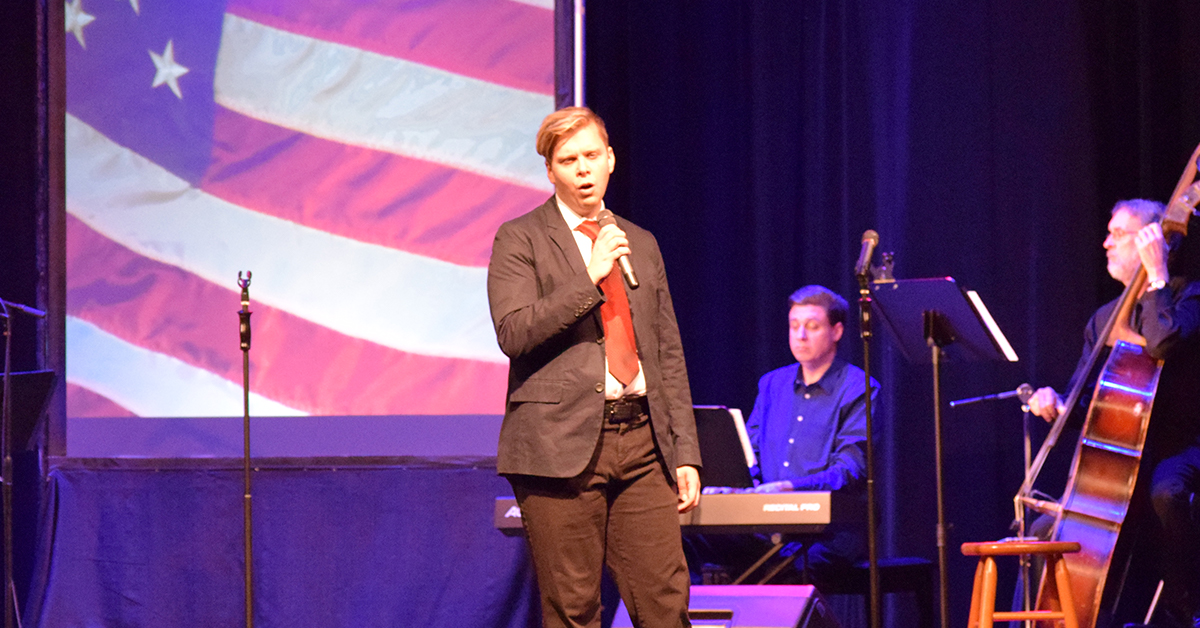 It’s no secret that Valparaiso welcomes its veteran community with open arms. The Memorial Opera House, one of the city’s most prominent historical sites, was built on the traditions and values of our troops, so it would only make sense that they put on a show free to veterans to thank them for their service. Many supporters and veterans alike came out to enjoy live performances of classic hits like “Beyond the Sea” and “I’ll Be Seeing You,” along with several odes to America.

The Memorial Opera House staff wanted to create a nostalgic event for all veterans. From World War II to Vietnam to Iraq, the live performances brought back feels for everyone. The Cabaret Coordinator for Memorial Opera House, Bobbie Sue Kvachkoff, knows that we wouldn’t be where we are today without our veterans, so being able to thank them for their service during an afternoon performance is beyond important.

“[John Peluso’s] goal was to create a cabaret full of music that either influenced them, made them think of home, or got them through the day while they were overseas fighting for our freedom,” Kavachkoff said. “Everything we have today is because of the veterans and watching all of the veterans come in, in their hats or jackets is emotional, it’s nice to see everyone be supportive.”

Last year, Director of the Hometown Heroes: A Salute to Veterans Cabaret, John Peluso, had the idea to do something a little different with the veteran’s cabaret. He wanted to include music that spoke to their personal experiences instead of the typical uniform respect of patriotism. He even went to the length of asking some veterans personally what songs stuck with them most.

“We dedicate one day a year to celebrating veterans, but the Memorial Opera House was founded for the purpose of furthering the mission that veterans had fought for and in this community we have a lot of veterans,” Peluso said. “We can’t do what we do without the service of others, so being able to take the timely opportunity to give back to that and recognize all of the sacrifices they made, I think is an important part of recognizing the entire history and purpose of this facility.”

The Memorial Opera House hosts six lunchtime cabarets every year and have done so for the last ten years with the veterans cabaret starting almost six years ago.

“The building is of course a monument to veterans of the Civil War and all wars and we wanted to make sure we were honoring our vets today and we’re doing so through some really great songs and we’re really excited for it,” said Scot MacDonald, executive director of Memorial Opera House. “[The veterans] really appreciate it. They love being able to hear the songs that remind them of their time serving and also just really appreciate that we’re saying thank you, and that’s what’s most important.”

Marine Corps, Navy Reserves, and Army National Guard veteran, Walter White (not to be confused with Heisenberg as he points out) is a retired Staff Sergeant who is also a regular at the Memorial Opera House. As a veteran of both the Vietnam and Gulf wars, something drastically different happened when he came home from the latter, he was welcomed. He couldn’t be happier to be a part of a community that is so appreciative of veterans.

“Thanks are appreciated. I was at the very beginning of Vietnam and when I came home I met total indifference. It wasn’t until later on when Vietnam vets started thanking ourselves because it seemed like no one else cared one way or the other,” White said. “When I came home from the Gulf War, we had a tremendous amount of welcome home because everyone decided that never again will we abandon our brothers, so being thanked is a welcomed change.”

For more information on Memorial Opera House, go to www.memorialoperahouse.com.