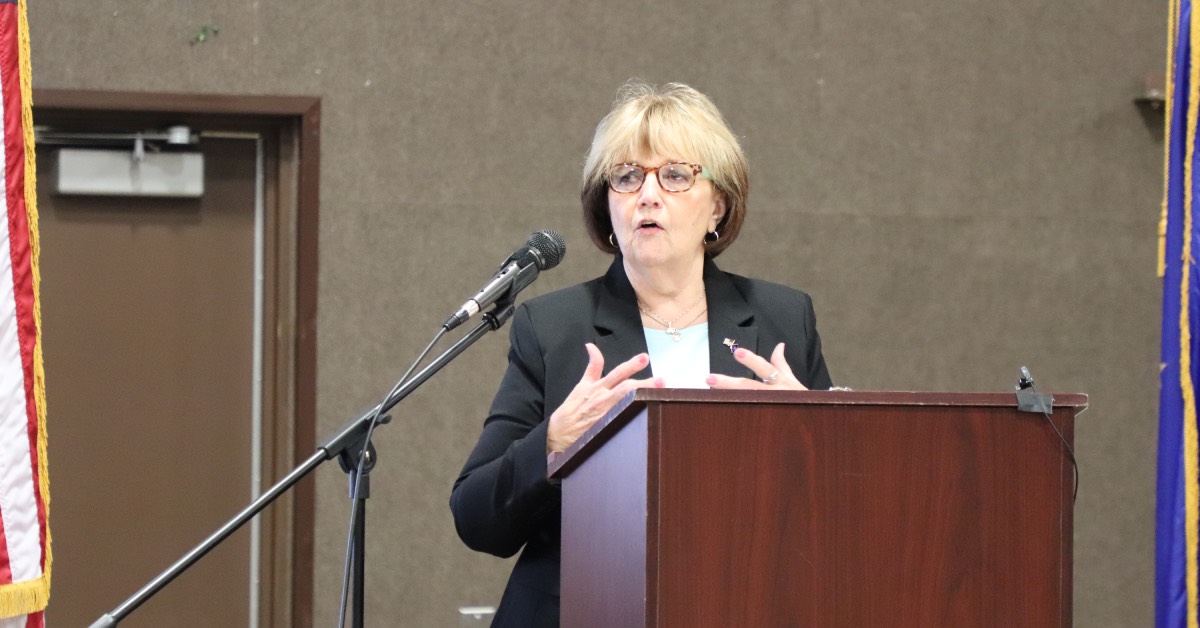 To reflect on the past year, Mayor Sue Lynch, along with local officials, council members, and representatives, gathered for the 2021 Portage Annual State of the City Luncheon. Tables were invited one-by-one to receive their meals provided by the Portage Parks Department and Clancy’s Irish Pub. The kitchen staff brought out the meals in individual, sealed containers. After each table received their food, the attendees were invited to recite the Pledge of Allegiance and join in prayer before Lynch dove into her speech about the challenges and successes of 2020.

With the new and persisting challenges Portage faced in 2020 in mind, Lynch praised city leaders for the way they took action where action was needed. One such thank you was directed toward frontline workers at the police and fire departments. Lynch recalled one instance in the past year when the Portage Police Department received a letter of thanks for its actions in apprehending an escaped criminal from Goshen.

“It wasn’t just our police, it was a citizen who saw him cowering in the corner of a laundry room,” Lynch said. “None of that would have happened without everybody coming together, and that’s what I’m always saying about people coming together – good things happen from that. We had a citizen who was watching out, we had our police who assisted the Goshen police, and the guy was captured. We got a really nice letter from Goshen saying what an exemplary police force we have.”

Lynch went on to emphasize how frontline workers consistently put their lives on the line through the pandemic. She noted the fire department was one of the groups most at risk and recognized their resolve to not let that keep them from serving and protecting the people of Portage. Chief of the Portage Fire Department Randy Wilkening has been with the city for 27 years and was proud to see how the fire department and community came together during the COVID-19 pandemic.

“We’re the ones going into people’s houses and transporting these people with COVID-19 to the hospitals,” Wilkening said. “Our guys and girls did great. They kept themselves safe; they kept the patients safe. We put in policies for masks and gowns, and the County Dispatch System developed a system to let us know if people had symptoms who could possibly be COVID-19 positive. The city came together, and we all work great together, whether it be the pandemic or the snowstorms. Whatever we do, everyone helps each other.”

The pandemic was not the only unique challenge that dominated people’s lives and minds during the pandemic. After the killing of George Floyd, groups and individuals across the country gathered to advocate for black lives. On June 1, 2020, hundreds of people assembled in Portage for a peaceful rally with many students leading the way. Lynch was proud of how students and police officers interacted at the event in a peaceful and constructive manner.

“We had about 400 people at that demonstration,” Lynch said. “Teachers of these students, parents of these students, faith leaders, and elected officials were there interacting with and embracing students. We understood that these students were concerned. Students stayed and talked in groups after they marched down the street. It was absolutely a fabulous thing, and it did not work that well for other cities. I felt that our police department handled that so beautifully. They met with these kids and talked to them.”

This event led to the formation of a group called “Idea” that focuses on equity and equality within the city. Lynch stated that Portage is a diverse city, and since she began her work as mayor, she has sought to bring that diversity to the city’s boards and commissions to better represent the community. Idea has helped Lynch find new avenues to pursue actively inviting diverse people to lead, serve, and protect the City of Portage.

While 2020 undoubtedly brought on unique challenges, Portage still had to grapple with other challenges that have persisted over the years. In 2020, Portage worked to lessen the city debt and prioritize which projects to fund so the city could make the most out of its financial resources. The city eliminated excessive spending and applied for several grants, including a Next Level Trail Grant totaling $2.5 million to improve local trails and a $1 million grant from Community Crossings that, if received, will go toward improving roads and crossings near schools.

Jamie Lewis, a financial advisor at Edward Jones and board member of City of Portage Public Works and Safety, has been pleased with how the city and mayor took strides in finances the past year.

“The finances have noticeably improved despite what we’ve gone through,” Lewis said. “I’ve been impressed with the way the city has held up and moved forward. If this hadn’t happened, we’d still have financial difficulties, but the mayor has really got a positive attitude – she just wants to get the problems solved.”

To stay updated on upcoming city projects, such as the construction of a new city plaza between the fire and police departments and the transformation of Garyton School into a community center, visit https://www.portagein.gov/.