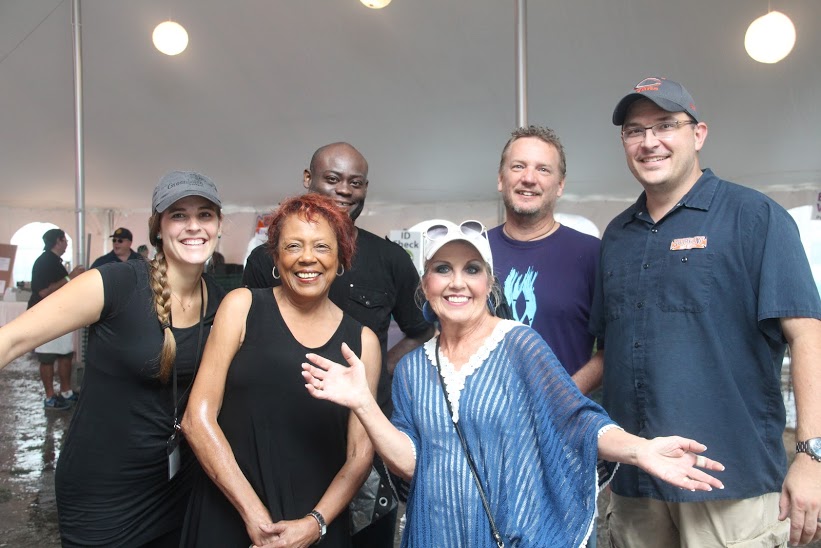 In rain and in shine the Lubeznik Art and Artisan Festival stayed committed to its mission to share the creativity of local artists with the rest of the community. The weekend of August 20th marked the 36th annual art fair in Michigan City.

For the first time, the Festival was brought home to the Lubeznik Center for the Arts. Booths from private artists lined the parking lot. Music played under the lunch tent, where Shoreline Brewery and other vendors were serving food and drinks. Guests were invited inside the Center to view galleries put up in June alongside a showcase from emerging artist Haley Schuberth.

The Center’s Executive Director, Erika Tanner, said, “After 35 years, every great idea can use a little refreshment. There was a literal disconnect from having the fest at Washington Park- we wanted to attract people to the [Lubeznik Center].”

Marketing Director, Amy Davis Navardauskas, agreed. “We moved it here so there would be no question whose fest it is.”

Rod Lubeznik is the Treasurer for the Center’s Board of Directors. His family donated their vacated offices to what was once called the Community Arts Center, so the organization could continue to grow. They filled the Lubeznik center with stunning photos, intimate sculptures, and emotional drawings. Rod Lubeznik was glad to see the fest held at the Center.

“It’s terrific,” he said. “It gives more exposure to the Art Center itself, and of the educational classes here.”

The Lubeznik Center holds classes on campus. It also does outreach programs to Michigan City schools. Other than the many art programs they have, they also teach literacy, violin, and ballet.

Many area schools have had to reduce funding for their art budgets. The Lubeznik Center tries to supplement the growing lack of art classes by providing them in after school programs like the Boys and Girls Club.

“Imagine a world without art,” said the high school student, Schuberth, whose origami sculptures and ornaments were displayed in the lobby of the Center. “It’d be boring, it’d be dry, it’d be bland. Artwork is something that brings color to the world.”

“It’s a tough budget decision,” said Navardauskas, “And we understand that. We try to help when we can. It helps the kids in our outreach program express themselves in a more positive way. It really does help the community.”

The Lubeznik Arts and Artisans Festival makes a celebration out of doing the same thing its educational programs and public galleries do: it shares culture with those in the community who are searching for a little wonder.

Joan Johnson attended the fest on Saturday despite torrential rain and unrelenting wind. She felt it was necessary to support the artistic community gathered at the Center.

“[The Lubeznik Festival] exposes people to other form of art. When people can appreciate the differences in things other people create, it introduces them to other outlets they could use for their creativity.”

Lubeznik Center for the Arts