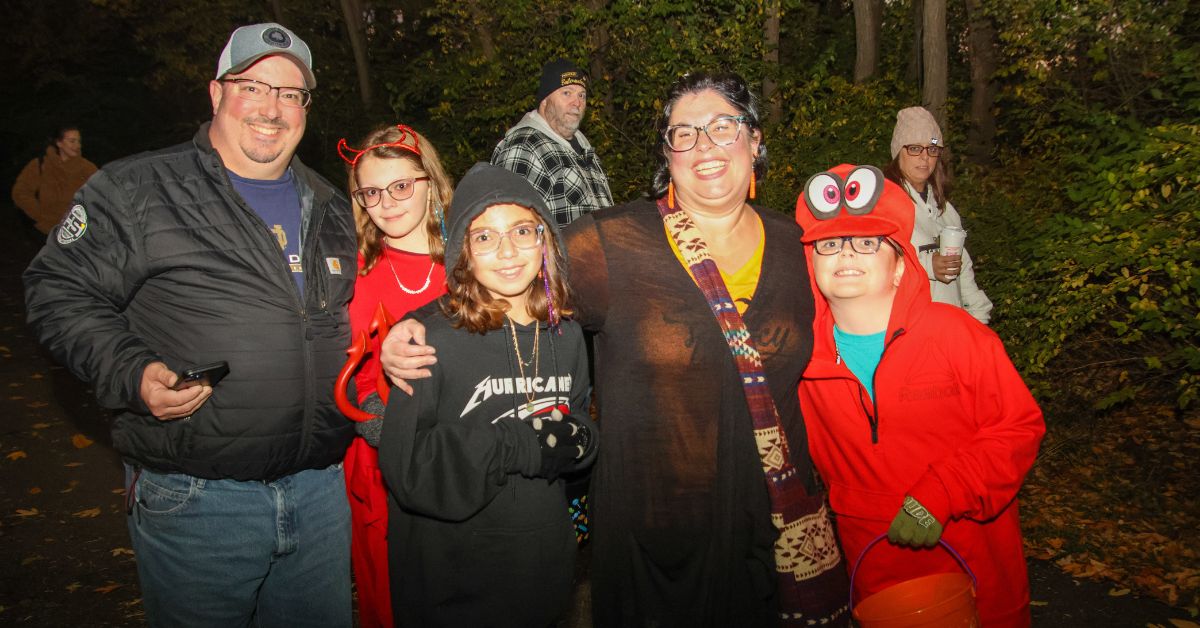 Hundreds of people walked the trails of Imagination Glen West Park in Portage on Saturday, October 15 for the City of Portage’s Light Up the Gourds event. With a Hocus Pocus theme, over 100 pumpkins, festive displays, and more lined the park’s paths and proved to be another successful event to help get everyone into the Halloween spirit.

Portage Event Partnership Committee (PEP) Member Andrea Riley was inspired to bring Light Up the Gourds to Portage after seeing the Pumpkin Spectacular in Kentucky. She was completely fascinated by everything she saw and knew she wanted those back home to experience that same feeling she had when seeing the display for the first time.

“It has about 5000 pumpkins; they're up trees and they're on carousels, and they have themed little areas,” she said. “When my husband and I went a couple of years before COVID, we took our grandkids and our kids. We saw it and we fell in love with it and thought we would love for the Portage community to have something like that. So we've been trying to make that happen here.”

This is the third year the city has hosted the event. Originally starting as a drive-thru event at the Bonner Senior Center during the height of the COVID-19 pandemic, it later made its way to the park. The event quickly gained momentum after its first year, so things needed to adjust to open the event up to more of the Portage community.

“The first year we wanted to do something for the community, and because of COVID we thought of making it a drive-thru,” said Norma Laboy, executive administrative assistant to Portage Mayor Sue Lynch and chairperson for PEP. “It was smaller, but It was a good introduction for it because it was our first year. That way we could introduce what Light Up the Gourds was all about. Then as we got more participants, we came over here because we liked the ambiance of the trail in the woods.”

This year featured more new additions, including an hour at the start of the event to allow senior citizens and those with sensory sensitivity to walk through before opening to the public. Golf carts, donated by LanCam in Chesterton, were able to transport people throughout the course, and all flashing lights were turned off to prevent overstimulation.

This time around, more of the Portage community had the chance to participate as compared to years past as well.

“This year, we also had a community carving night that we did that Thursday night before,” Laboy said. “We had almost 50 people from the community just come in and carve for us so we could place their pumpkins along the trail to fill in it.”

Many Portage businesses and nonprofits also jumped in to help with the displays seen along the trails as well. Organizations such as the Portage YMCA and the Portage Fire Department created their displays for the event, as well as schools including Central Elementary School and Crisman Elementary School.

Bringing something special to Portage has been Riley’s favorite part of it all, and loves that she can be a part of an event to showcase the city’s creativity.

“Valpo had the Popcorn Festival, and Chesterton had the Oz Fest, and it just seemed like everybody had something, but Portage didn’t have that thing,” she said. “I was hoping that this could be our thing, where people could do their art and put it on display here, and people would just walk down the trail and see it. Anytime I can get somebody to do art, and have it displayed and have other people enjoy it, that's what I love about it.”

That community aspect, in turn, is what completes the process.

“I just appreciate all the people that have supported it,” Riley said. “The firemen always have a beautiful display. The Girl Scouts always do stuff, as well as the Y. It's just nice to see a community come together, and it’s just about bringing people together.”

In addition to Light Up the Gourds, PEP and the City of Portage host a variety of festive events throughout the year, including Fourth of July parades, Memorial Day Parades, and veteran events. To keep the Halloween fun going, they’re also hosting a haunted house decorating contest. Voting will be on PEP’s Facebook page, and awards will be given to the houses with the most likes. Additionally, winners from Light Up the Gourds are expected to be announced on Monday, October 17.

For more information on the City of Portage, visit portagein.gov.