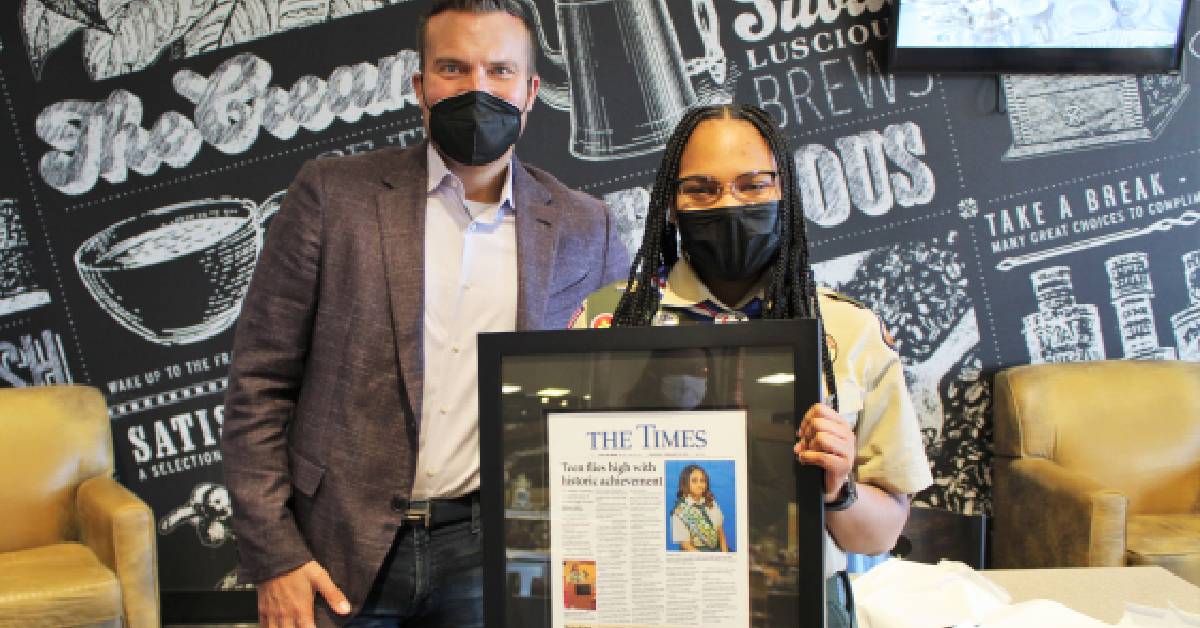 Kendall Jackson, a senior at Lake Central High School, is officially the first black woman to be named an Eagle Scout. She, along with 20 other young women, are a part of the nation’s inaugural class of female Eagle Scouts – the first to claim the rank since the Boy Scouts of America began admitting girls in 2019.

The 17-year old has had an extensive amount of scouting experience in her life so far. Her older brother is also an Eagle Scout, and her mother served as the Scoutmaster for Troop 53 in Gary for 22 years. Camping trips and other scout outings were practically second nature to her by the time she was able to officially join the Scouts, which helped her quickly move up through the ranks and make history by earning the title of Eagle Scout before her eighteenth birthday.

“I’m just speechless, and I’m blessed to have this experience,” said Jackson. “To officially get credit for all the work I’ve done in the past is absolutely amazing and I wouldn’t trade it for the world. Becoming an Eagle Scout means the work never stops. I plan on continuing to give back.”

Jackson’s mother, Kellauna Mack, shared her sentiment that putting words to the achievement is difficult.

“It’s indescribable,” said Mack. “She’s always been a good child and excelled in all that she’s done. I was extremely proud when my son became an Eagle Scout in 2011, but this is very special to be in the inaugural class of female Eagle Scouts. I stand in awe of her work ethic. She has accomplished each and every one of the goals she’s set.”

Earning the rank requires completing an Eagle Scout project, where the candidate uses everything they have learned thus far to benefit their community in some way. Some scouts do public works projects, such as building benches or playgrounds, while others like Jackson organize events. She called her event Project 21, and it was a day full of seminars, presentations, and other learning opportunities for graduating seniors looking to explore their post-high school career options, college and otherwise.

“The inspiration came from my best friend, who had asked my mom for help getting ready for college,” said Jackson. “She didn’t really know how to get ready or what steps to take. I wanted to help other kids because I was blessed to have all these resources and people available to help me, so I wanted to share that with others.”

Jackson’s event was catered by Strack & Van Til, and through it, Jeff Strack, President and CEO of the local grocer, learned about Jackson and her ambitions. An Eagle Scout himself, he decided to honor Jackson’s achievement with a small celebration at the Schererville Strack & Van Til store.

“It’s a tremendous accomplishment,” said Strack. “Her competitiveness, drive, and the foundation that she’s built from this mean that her future is unlimited.”

Jackson is set to attend Howard University, where she plans to study health sciences and pursue a career in physical therapy or training. She hopes that her accomplishments, and those of the other young women in the inaugural class, will help to show young girls what they can achieve.

“Girls can earn this rank, nothing’s different, we’re on the same level as the boys,” she said. “Girls can do anything they put their minds to.”

To learn more about the Boy Scouts of America, visit scouting.org. For more information on Strack & Van Til, visit strackandvantil.com.