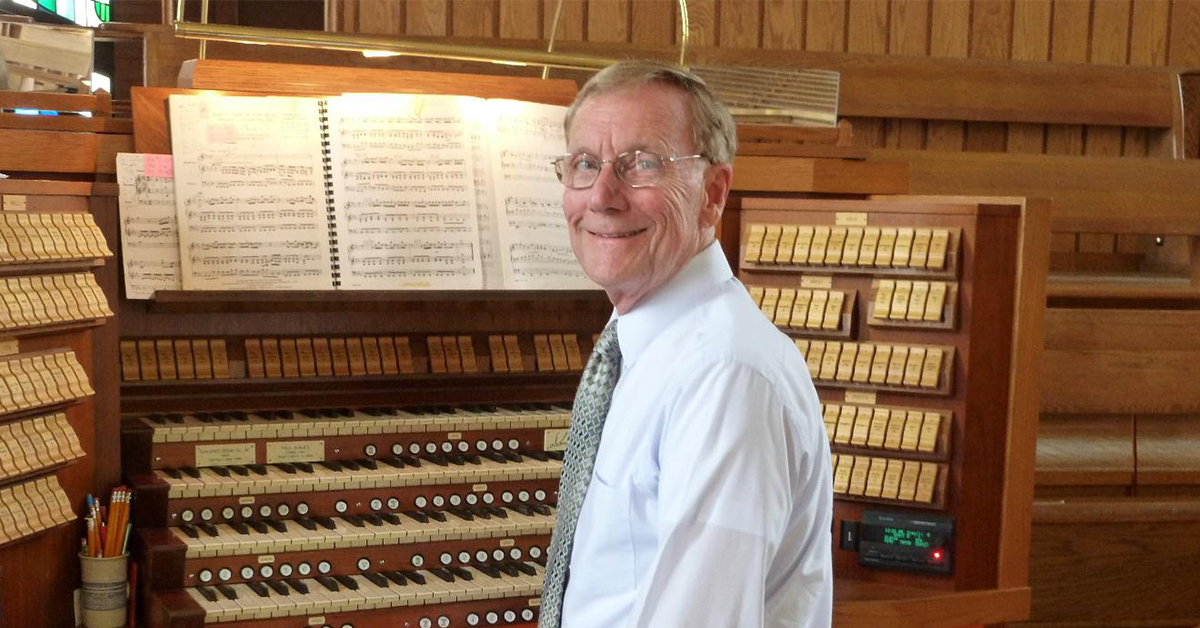 All are invited to attend a free concert in the La Porte Hospital Chapel at noon on Friday August 2.  William "Bill" Burger, a local organist, will perform a wide variety of organ music from such well known composers as J. S. Bach, G. F. Handel, Leon Boellmann, Wolfgang Mozart and Paul Manz.  It is his desire to demonstrate the multitude of tonal qualities of the chapel’s wonderful organ.

Bill was born in La Porte, Indiana on March 21, 1942 to Walter and Mary Alice Burger.  At age 6 he started taking piano lessons and at age 11 he was introduced to the organ.  The new St. John’s Lutheran Church building was not ready to house the temporary electronic organ, so Bill’s dad volunteered to keep it in his house until the church was ready.  Well, Bill had to check it out and found he loved the variety of sounds he could make.  The piano quickly took a back seat to his new-found interest and he put his full effort into developing his musical talent with the organ.

During his high school years he would take the South Shore train into Chicago every Saturday where he studied with Amo Cappelli at the Baldwin Organ store on Wabash Street.  During his junior and senior years Bill gave recitals on the Schlicker (32 rank) pipe organ at St. John’s Lutheran Church.  It was, and still is, the largest organ in La Porte.  He would substitute for the regular organist, Ruth Hootman, on many occasions.

During his four years at Northwestern University in Evanston, IL, Bill played for St. James Lutheran Church.  Although he was a Business Administration major with an emphasis on Marketing, he managed to take some organ classes including one graduate class on Organ History and Design.  It fascinated him to learn how the organ developed from J. S. Bach’s era to the cathedral organs built throughout Europe in the 1800’s.

After graduating from Northwestern, Bill returned to La Porte to follow his father’s footsteps in managing the Thanhardt-Burger Corp. (manufacturer of hand-crafted picture frames) and W. T. Burger Co., Inc. (importer of original oil paintings).  He also became the director of the Walther League Chorus (St. John’s Church Choir) when his father died in 1969.  In addition to that, Bill regularly played the organ for about 1/3 of the church services at St. John’s for the next 40 years.

For the last 8 years Bill has had the privilege to play for many weddings at Valparaiso University’s Chapel of the Resurrection which has the largest and finest pipe organ in any private university in the Midwest (71 ranks, 4 manuals).  He also substitutes at several churches when their regular organist is on vacation.

La Porte hospital is pleased to offer this concert and encourages area residents to attend.

First Friday in the Chapel is made possible by the Healthcare Foundation of La Porte (HFL), a not-for-profit foundation dedicated to empowering residents to live healthy and well in and around La Porte. HFL is proud to support health and wellness programs and services to achieve the vision of La Porte becoming one of Indiana’s top 10 healthiest communities by 2030. For more information about First Friday in the Chapel performances, please call 219-325-7633.  All concerts are held in the chapel at La Porte Hospital, 1007 Lincolnway in La Porte.