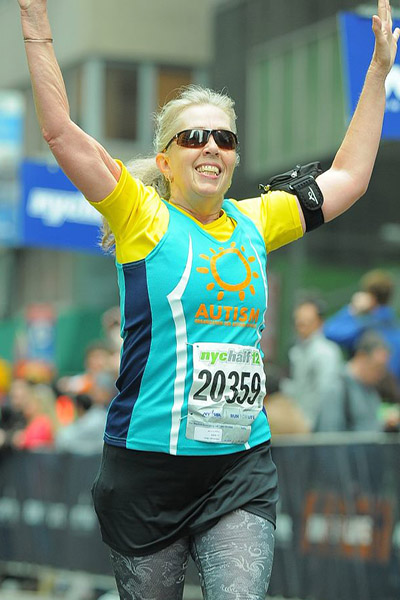 For the past four years, running has taken a new meaning for Diane Kellenburger. A runner of 14 years, Kellenburger decided to put a meaning behind her running, choosing Autism as her cause. In just four years of running for autism, Kellenburger has raised $9,388.37 and with her $3,500 goal for 2012, she looks to break her $10,000 goal she set for herself when she started running for her cause. She has lived in Northwest Indiana all her life, the last 15 years in Portage. She is 65, have two children, five grandchildren and is anxiously anticipating the arrival of her 1st great-grandchild this August.

Each race that Kellenburger competes in helps raise money for the Organization for Autism Research. Kellenburger raises money through her donation website.

“The last four years I have decided to put more meaning in this endeavor by raising money for Autism research,” she said. “My grandson Ryan is 12 years old, just finished the fourth grade, enjoys watching and making videos, using the computers and the iPad, reading Dr. Suess, and is autistic.”

In 2012, the Centers for Disease Control and Prevention reported that autism now affects 1 in 88 children and 1 in 54 boys. More children will be diagnosed with autism this year than with AIDS, Diabetes and Cancer combined. Autism is the fastest-growing serious developmental disability in the United States. Autism costs the nation $137 billion per year. The disease receives less than five percent of the research funding of many less prevalent childhood diseases. Boys are four times more likely than girls to have autism and there is no medical detection or cure for autism.

Kellenburger is not only running for her grandson, but for her daughter Kimberly as well.

“When Kim was little I could kiss the hurt and make it go away or some cookies and milk would fix anything,” she said. “But now those solutions no longer work as I stand by feeling helpless watching her struggle to find services and therapies for Ryan, and advocate for him with insurance companies and school systems.”

In 2012 alone, Kellenburger has run five half marathons and two 10 mile runs for the Organization for Autism Research. The OAR is based in Arlington, Virginia. The OAR is a national nonprofit organization with a mission to apply research to the challenges of autism. OAR funds research that can be applied to help families, educators, caregivers and individuals with autism find much needed answers to their immediate and urgent questions. No other autism organization has this singular focus according to the OAR. Over 4,400 runners have raised nearly $3.6 million for autism research. $0.84 from every dollar raised goes directly to research and programs for autism.

The people of Northwest Indiana have also been very generous in supporting the OAR through the Cupcakes for Autism at Designer Desserts in Valparaiso and the Dinner with the Chef for Autism at Sage Restaurant in Chesterton.

“Running and raising funds for autism research, now that’s something I can do,” she added. “That is why I run for Autism.”

To donate to Kellenburger's fundraising goal, you can visit her donation website here.