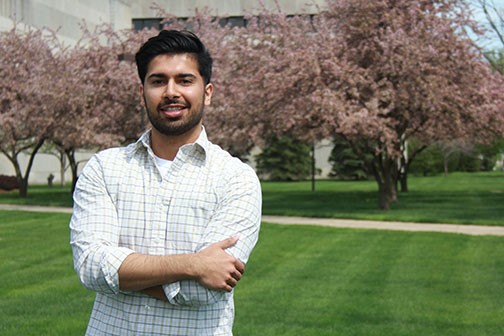 Salman Lakhani, 21, of Chesterton, graduates this May with a bachelor’s degree in psychology and a minor in chemistry.

Judging from his activities and academic accomplishments, it seems the Chesterton High School alumnus doesn’t do anything at less than 100 percent. Graduating in three years with a 4.0 grade point average, while fulfilling all the prerequisites for medical school, one might think he spends every waking moment studying.

For those who might not yet be convinced that Lakhani is super human, consider some of his other challenges, which go over and above the typical refrain of juggling school, family and work.

“I think the most challenging experience for me was taking both organic chemistry lectures/labs over the course of my freshman summer break,” he said. “I was fasting that summer for Ramadan. My days consisted of going to school, coming home and sleeping, breaking my fast at sunset, heading to prayers until midnight, staying up until morning prayer, working on schoolwork until 4 or 5 a.m., and sleeping again before school. I do not think I have exerted as much energy as I did that summer.”

Lakhani said that immersing himself in a community where he belonged and felt supported was key to his ability to complete it all. His older brother and sister had both graduated from IU Northwest, so he already felt at home when he arrived.

“IU Northwest had everything I was looking for,” he said. “I wanted small class sizes, professors who were accessible, a great education, and a sense of belonging. IU Northwest had all the things I needed to further my life goals and one day become a physician.”

Lakhani chose psychology as a major because he sees it as complementary to the study of medicine.

“Psychology brought a different perspective into understanding people,” he said. “Going into the field of medicine, I feel that it is so important to be able to communicate and understand what your patient is going through. In that respect, psychology opened to me different topics on cognition, human behavior, and more, that I truly believe will help me in my future.”

Lakhani earned an IU Northwest Second Tier Academic Scholarship for all three years that greatly reduced the financial burden of his education – a gift that he does not take lightly.

“I am grateful because I was granted the luxury to learn, and that is something most people around the world may never get the opportunity to do,” he said.

About the Class of 2017:
Indiana University Northwest will confer 643 degrees at the 51st Annual Commencement ceremonies on May 11, 2017. The Class of 2017 will collectively receive 64 associate’s degrees, 532 bachelor’s degrees and 47 master’s degrees. Sixty-nine percent of this year’s graduating class are female and nearly 25 percent are over the age of 30. The most numerous degree to be granted is the Bachelor of Arts in Psychology followed by the Bachelor of Science in Nursing. The oldest and youngest graduating students are 64 and 20 years of age, respectively.