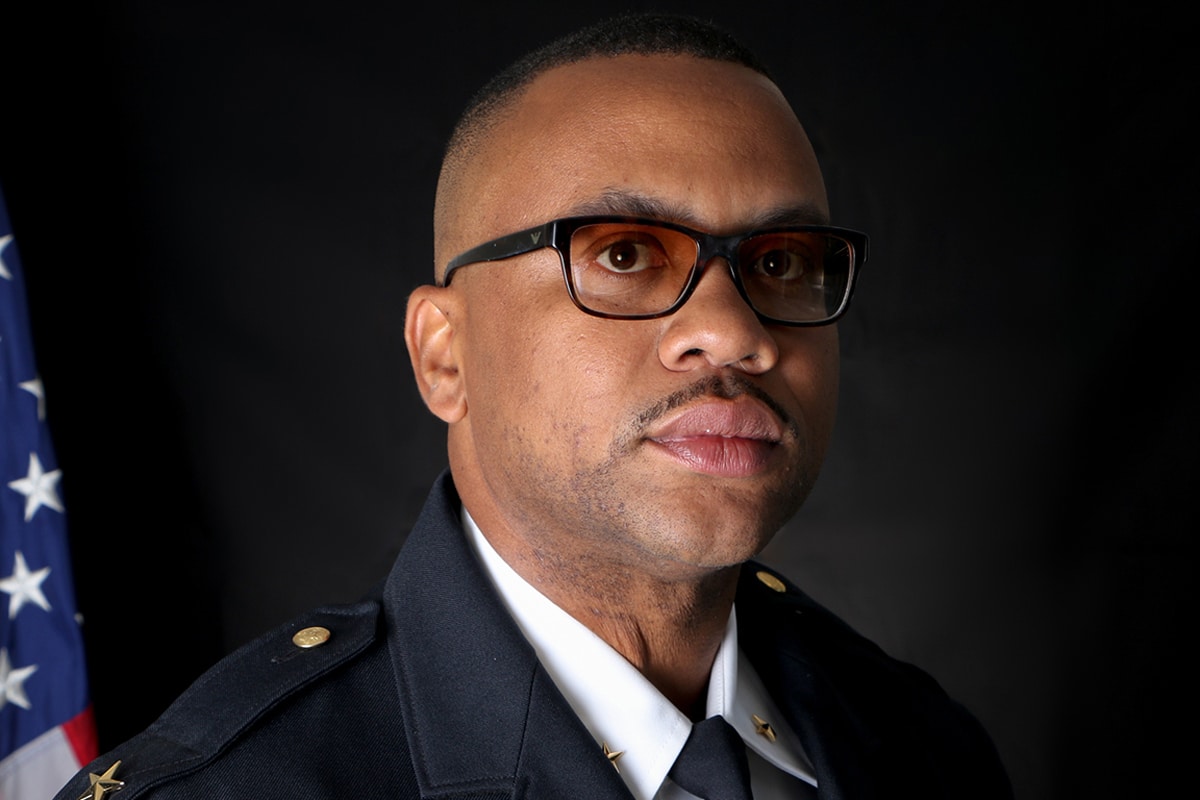 Chief Wayne James, of Indiana University Police Department – Northwest (IUPD-NW), will be honored later this fall as one of the International Association of Chiefs of Police (IACP) 40 Under 40 Award recipients. The award, given this year to law enforcement officers from the U.S. and nine other countries, recognizes notable leadership skills and a commitment to the law enforcement profession.

"Chosen from a very competitive field of applicants by review panels composed of law enforcement executives, previous awardees, and international representatives, these individuals embody the qualities inherent in excellent law enforcement personnel and leaders," stated the IACP when announcing the award recipients.

James has also served as the IU Police Department's first Chief Diversity Officer for almost a year, developing relationships on all of IU's campuses similar to those he has developed at IU Northwest and in the city of Gary, where he was raised. James emphasizes community engagement, where he and his officers interact with neighbors of all ages in a variety of ways, including basketball games, an ice cream truck, shoveling snow, and a neighborhood clean-up. Officers also look for opportunities to regularly engage with students, faculty and staff.

Creating an inclusive campus
James has been successful at recruiting police officers who reflect the diversity of the IU Northwest campus, with specific focus on increasing the number of female officers. There are currently four female officers in a staff of 22--a high statistic in the male-dominated law enforcement profession. James says he intentionally works to diversify his force and continues to work with colleagues at IUPD locations across the state to increase diversity throughout the department.

"He has embraced this Chief Diversity Officer role with a sense of pride and professionalism," Benjamin Hunter, superintendent of public safety at IU and interim associate vice president of Public Safety and Institutional Assurance, said when nominating James for the award. "Wayne has met with countless students highlighting our commitment to procedural justice and fair and impartial policing, topics that will be taught to recruits in the IU Police Academy with James's assistance."

Hunter also noted James's role leading the work of the De-escalation and Training Commission, which brought together police officers, faculty, staff, and students to look at IUPD's policies, training, and equipment related to incidents where police encounter resistance or are required to use force.

"His background is not unique in law enforcement, but his commitment to servant leadership is second to none," Hunter said.

James will be honored with the other award recipients during the IACP annual meeting in Orlando in October.

About Indiana University Northwest
One of eight campuses of Indiana University, IU Northwest is located in metropolitan Northwest Indiana, approximately 30 miles southeast of Chicago and 10 miles from the Indiana Dunes National Lakeshore. The campus has a diverse student population of approximately 4,000 degree-seeking students and 1,500 dual-credit students. The campus offers Associate, Baccalaureate and Master’s degrees in a variety of undergraduate, graduate and pre-professional degree options available from the College of Arts and Sciences, the College of Health and Human Services, the School of Business and Economics, the School of the Arts and the School of Education. The campus is also host to IU School of Medicine-Northwest-Gary, which actively involves students in research and local healthcare needs through its four-year medical doctorate program. IU Northwest emphasizes high-quality teaching, faculty and student research and engagement on campus and in the community. As a student-centered campus, IU Northwest is committed to academic excellence characterized by a love of ideas and achievement in learning, discovery, creativity and engagement. Indiana University Northwest is an equal opportunity/affirmative action employer committed to achieving excellence through diversity. The University actively encourages applications from women, minorities, veterans, persons with disabilities, and members of other underrepresented groups.