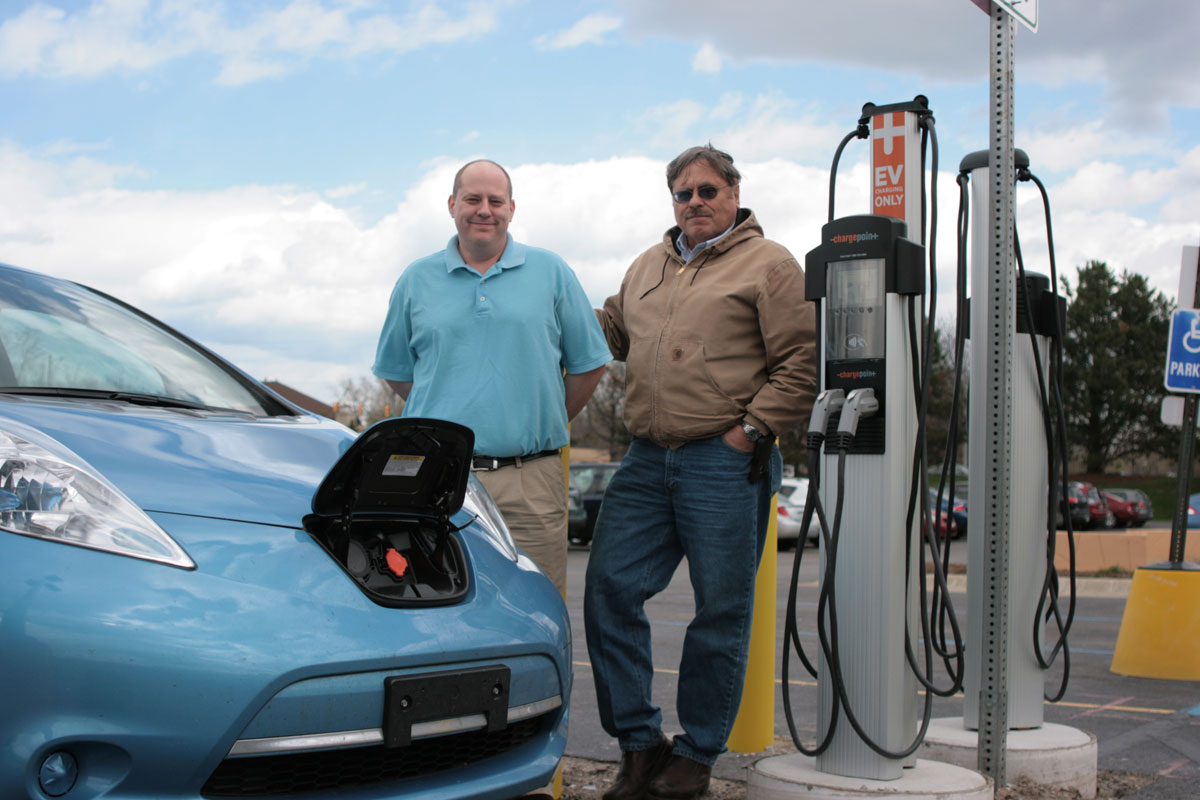 The two units accommodate four all-electric vehicles as well as plug-in hybrid vehicles. The stations are available to those with an IU Northwest parking permit or a temporary permit. Temporary permits can be obtained for $2 a day at kiosks located at the north and south ends of the campus.

The cost to use the stations is $1 per hour for the first four hours of charging, enough for a typical recharge. Those who occupy the space for more than four hours at a time will be charged $5 for each additional hour.

Professor of Geosciences Erin Argyilan, Ph.D., who is involved in the campus’s sustainability efforts, applauded the addition of the EV stations, funded by the IU Northwest Office of Administration.

“College campuses need to take the lead in implementing creative solutions for the problem of atmospheric carbon pollution,” Argyilan said. “By installing EV stations at IU Northwest, the campus is demonstrating its commitment to innovation and leadership in the region. As a commuter campus, it is critical for us to adopt and promote new technologies that help to reduce the carbon footprint of our students and campus as a whole.”

“Anything we can do to reduce our dependence on oil is a good move,” he said. “College campuses need to lead the way in adopting greener technology and by installing these stations, we are setting a great example that hopefully, others will follow.”

Jefimenko, who drives a hybrid vehicle, said his next car will likely be all electric.

“Those who work and attend school here can feel more confident about buying an electric vehicle because they’ll have a reliable place to recharge,” Jefimenko said.

Director of Microcomputer Support Mark Uncapher, of Demotte, Ind., whose daily commute is nearly 80 miles, is one of those employees. As a member of the campus’s Sustainability Committee, he felt compelled to buy a 2014 Nissan Leaf, which runs solely on a battery charge.

“I felt that if I was going to preach to individuals about adopting more environmentally friendly measures, it was something I ought to practice,” he said.

Uncapher took advantage of NIPSCO’s residential customer incentive to install a charging unit at his home, but until now, he couldn’t drive his car to work in the colder months because he couldn’t make the entire 80-mile round trip on one charge. Now that he’ll be able to charge up at work, he can drive his Leaf year-round.

“It’s awesome,” he said. “It’s wonderful that the administration here supported it. The big thing is the fact that I drive 80 miles round trip and that is a large amount of foreign oil and emissions that’s could be effecting the environment. I applaud the University for taking a real positive stance on sustainability.”

Uncapher has been invited to speak to groups of students about the benefits of owning an electric vehicle. He hopes this will give the movement momentum and bolster sales of all-electric vehicles.

Argyilan pointed out that in recent years IU Northwest has made notable advancements in demonstrating a commitment to environmental sustainability. Beginning with programs like the “RedHawk Print,” a program which encourages better printing habits, IU Northwest is reducing waste and resource consumption while raising awareness. In 2011 the campus upgraded its waste management program by expanding its on-campus recycling program. And students might notice the addition of refillable water stations and solar compactors on campus, technologies aimed at decreasing landfill waste and promoting sustainable practices.