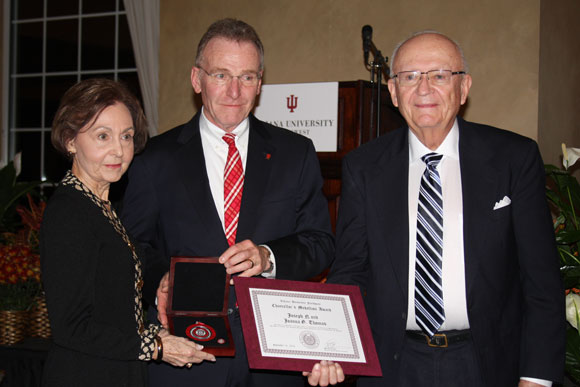 At the celebration, IU Northwest Chancellor William J. Lowe will award the Chancellor’s Medallion to:

“I am proud to present the Chancellor’s Medallion, the highest honor to be presented by the Chancellor of IU Northwest, to these four friends, who truly represent the “margin of excellence” for our campus,” Lowe said.

“These honorees have all rendered distinguished service to the University and Northwest Indiana community,” Lowe said. “Their efforts and exemplary philanthropy have been instrumental in advancing IU Northwest, and, in particular, supporting our greatest asset, our students.”

Reservations are $125 each. Please RSVP by Friday, November 7.

For sponsorship and ticket information, please contact Cathy Mezzacapo in the IU Northwest Office of Development at (219) 980-6801, email cmezza@iun.edu or visit www.iun.edu/medallion.

Dave and Louise Allard
For nearly 45 years, Dave and Louise Allard, of Olympia Fields, Ill., have been devoted Indiana University alumni. Dave, a Bloomington graduate, and Louise, a Northwest graduate, are exceptionally loyal Varsity Club members and active IU Alumni Association members. Additionally, they are especially generous both financially and with their time to IU Northwest.

As a way to remember Mayor Mandich’s lasting legacy and significant contribution to the campus, the Allards donated the “Ballast” sculpture to the campus’s Shadows and Echoes Sculpture garden.

E. Thomas “Tom” and Sylvia Collins
Tom and Sylvia Collins are residents and active community volunteers for their hometown of Gary, Ind. Sylvia, a proud IU alumna, earned a B.S. in elementary education from IU Bloomington and her M.S. in elementary education from Indiana University-Purdue University Indianapolis. Sylvia taught for 23 years in the Miller Beach, Portage and Indianapolis school systems.

Tom joined the Chicago-based real estate firm, Hiffman Shaffer Associates, Inc. in 1985 and, in 1993, was named President and Chief Operating Officer. He is co-founder of Reliant Group, Ltd. and Clark Street Development, and owner of Collins Interests, Ltd.

Sylvia and Tom have been involved with IU Northwest in various capacities, such as endowed scholarship donors, and members of the Chancellor’s Society, the Chancellor’s Commission on Engagement and the Board of Advisors. They have given endlessly to the future of our students.

They are also committed to IU as members of the 1820 Society, and the IU Foundation President’s Circle, to name a few.

Tom's nephew and two of his children attended IU Bloomington.

Upon earning her Doctor of Dental Surgery degree from Indiana University School of Dentistry in Indianapolis, Lynn built a thriving dental practice in Gary. She is the first woman to serve on the IU Northwest Chancellor’s Society, and recently became a member of the IU Northwest Board of Advisors. She also serves as a member of the IU School of Medicine-Northwest’s Advisory Board.

Lynn was elected to the IU Foundation Board of Directors and continues to serve in that capacity. She also works as a volunteer clinical professor at the Indiana University School of Dentistry. And, she received the highest distinction conferred on IU alumni, the Distinguished Alumni Service Award.

Al graduated from Valparaiso University and later earned his MBA from IU Northwest. He established a successful 33 year career with Transtar, a transportation conglomerate. Following his retirement, Al spent the next eight years as a Corporate Jet Captain. Since retiring from flying, he has been honing his musical skills playing the trumpet.

They were inducted into the IU Foundation President’s Circle, and retain ongoing membership in the Well House Society, the 1820 Society, the Arbutus Society and are life members of the IU Alumni Association.

Seeking meaningful ways to share their IU experience and success with others, Al and Lynn endowed a scholarship in the Wells Scholars Program.

Community Foundation of Northwest Indiana, Inc. (CFNI)
CFNI is a not-for-profit 501(c)(3) organization that provides leadership and resources for the enhancement of health and the quality of life in Northwest Indiana.

Throughout its history, CFNI has supported a number of charitable ventures in Northwest Indiana, including IU Northwest and the IU School of Medicine-Northwest. Their scholarship support has been endless in ensuring that our students can earn their IU degree.

Other community projects include the development of The Center for Visual and Performing Arts; creation of a not-for-profit foundation for cancer research, operation of the Cancer Resource Centre; donation of land and more than $3.5 million to create the Community Veterans Memorial; and Hartsfield Village.