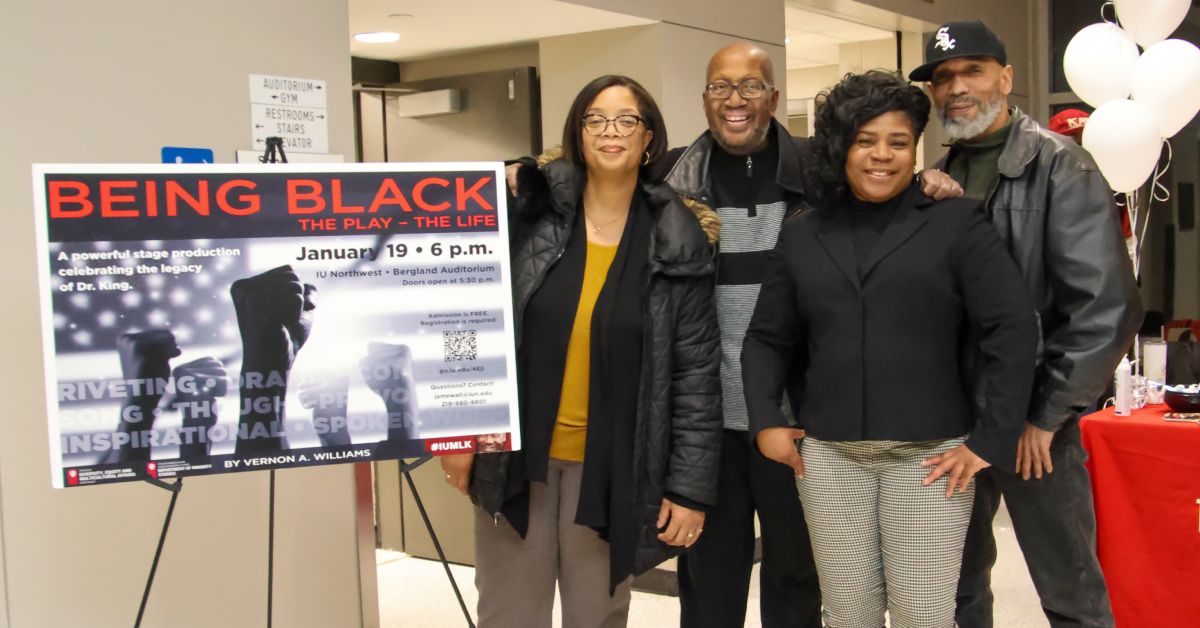 Throughout this past week, Indiana University (IU) Northwest has held several events to celebrate Dr. Martin Luther King (MLK), Jr. as well as encourage meaningful thought and conversation about current social justice issues. On Thursday, January 19, IU Northwest wrapped up the week with a presentation of Vernon Williams’ play “Being Black.” All kinds of community members came out to enjoy the show and left thinking a bit more critically about the world we live in.

“Being Black” is a collection of vignettes, poems, essays, and dramatic skits that paint vivid pictures and give audiences a glimpse into the experiences of the Black community. Williams originally wrote the play in 2019 and updated it in 2020 to include more recent issues. The play was first presented at OnyxFest 2020 and has been presented at several festivals since.

“The play is relevant because it really speaks to all demographics within the Black community. There's no single story – it touches on several areas that are sensitive to the people who are watching it and allows them to see themselves or their relatives or friends or classmates in various parts within the play. It makes you feel all kinds of emotions. There are some parts that make you laugh, and then there are some really serious, dramatic parts that deal with some of the most serious issues that we face in this country,” said Williams.

When IU Northwest’s Office of Diversity was planning its MLK celebrations, the team knew it wanted to find a way to entertain the community, give people something meaningful to think about, and highlight local talent.

“I wanted folks to walk away feeling empowered to carry on King's legacy in their own lives as well as the lives of the folks that they touch,” said James Wallace, director of the IU Northwest’s Office of Diversity.

The choice to invite Williams and present “Being Black” was an easy one. When Williams received the invitation to present his play at IU Northwest, he was beyond excited. Williams grew up in Gary, so getting the opportunity to come back to his hometown and share such an important message was immensely special.

“It's quite an honor. I was very humbled and felt that it was a tremendous opportunity to share an extremely important message with an even more important audience. It’s a thrill that some of my friends, relatives, and classmates were able to come out and enjoy it. I hope they all had a good time and were entertained and enlightened at the same time,” said Williams.

To say everyone was entertained and enlightened would be an understatement. The play took the audience on an emotional rollercoaster. The more lighthearted skits had the audience laughing out loud, while the deeply emotional moments left the air feeling heavy. What was particularly moving were all of the nodding heads and murmurs of assent as people connected personally with the play.

“I had a father come up to me at one of my last showings and tell me one particular scene almost brought him to tears because it was so similar to what he was going through with his own family,” said Williams.

Wallace was deeply touched by the play. He hopes that even after people go home and back to their lives that they continue to think critically about these social justice issues so that someday things might change.

“It focused on so many issues that are troubling folks today, whether it be financial, economic, educational, health, or even engagement with law enforcement-- the play touched on them all. It’s important to keep these things in mind so that we can work collectively to develop solutions to address them,” said Wallace.

Overall, IU Northwest’s presentation of “Being Black” was the perfect way to celebrate Dr. King, and encourage people to keep pursuing social change.

IU Northwest’s celebration and carrying on of Dr. King’s legacy doesn’t end here, though. On February 9, IU Northwest will hold a discussion about the film “Shared Legacies” which explores the African American and Jewish Civil Rights Alliance. Then on March 22, Debbie Irving, author of “Waking up White,” will be visiting to give presentations about being a transformational person.

“It's certainly important that we remember Dr. King and what he stood for, not just for a portion of the year but throughout the entire year. We need to live by these morals and these principles,” said Wallace.