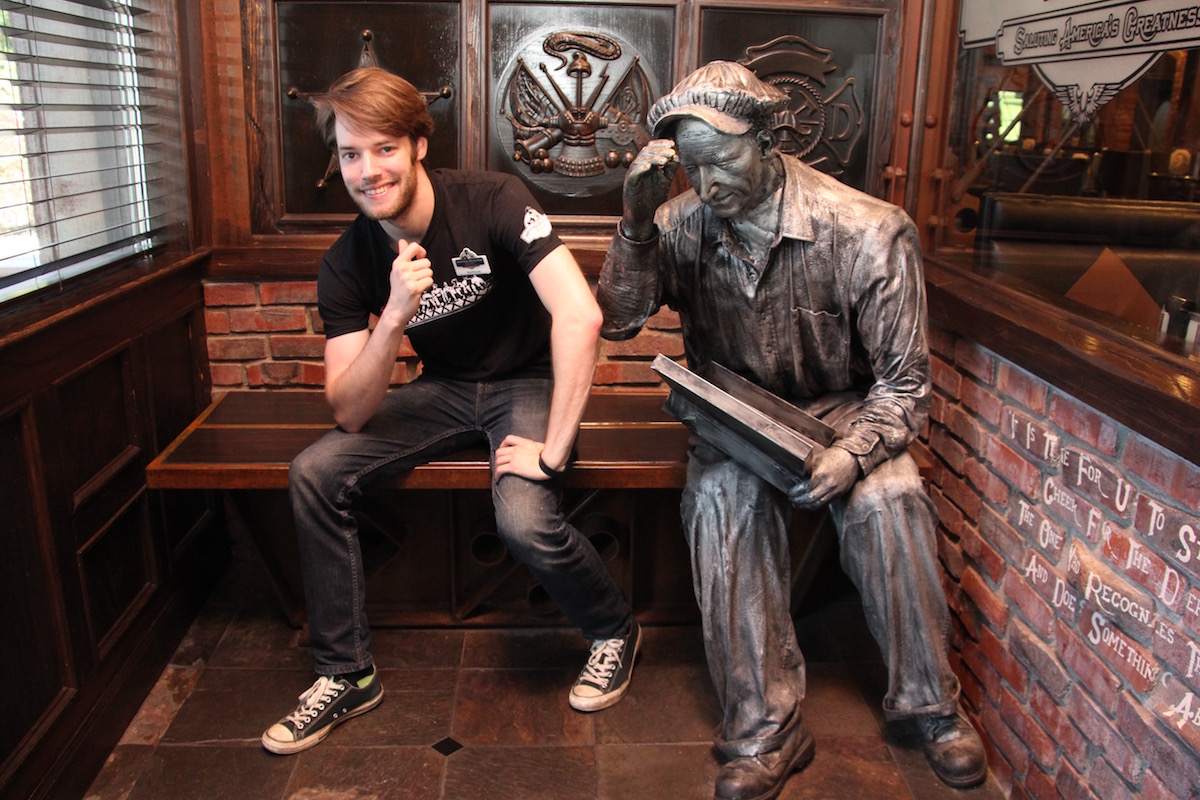 Nathan Allen has been in the restaurant business for many years, but he is one of Industrial Revolution’s newest employees. Allen has been at Industrial for roughly 9 months and he isn’t going anywhere just yet.

Allen has been a people person his entire life. He loves to entertain and make people laugh. He actually had his very first job at a restaurant in Merrillville when he was only 11 years old.

Allen is originally from Hobart and when he was in middle school, he used to walk to a magic shop in town every day after school. Once there, he would hang out in the store and learn magic tricks from the man who worked behind the counter. For every birthday and Christmas he would ask his parents for new magic tricks from the store until he built up a pretty big collection.

With complete support and help from his parents, he began performing for friends and family at parties and soon after performed for friends of friends, and so on. He was having so much fun and success doing it that his parents even got him his own business cards and helped him run a magic show business.

His young career took him to a restaurant where he offered his services to perform for guests once a week. Every Wednesday he’d perform for the entire restaurant. He eventually even learned how to make balloon animals for the kids there. A year and a half later he was unfortunately let go because the restaurant was being downsized, but he never give up on performing.

Allen graduated from Columbia College Chicago with a degree in Theatre and Acting, with a concentration in Stage Combat. “You basically learn how to make it look like you are actually fighting, without actually fighting” said Allen.

“I feel like if I ever got in a real fight I would lose, but I would make it look really good!” joked Allen.

Allen now spends his spare time working as an Acting Coach for kids in the Indiana Youth Ballet where he does acting games with the kids to help them develop more emotion in their faces while they dance. He also acts as their Fight Choreographer.

The director also gives him parts in the shows including this year’s The Nutcracker, where he will act as the Mouse King and during their April showing of Peter Pan where he plays Captain Hook which is “the coolest thing ever!” said Allen. Captain Hook is one of his favorite characters to play.

At the moment, Allen is perfectly happy doing two shows a year with the Indiana Youth Ballet and working at Industrial Revolution to pay off his student loans. He has even done a few shows at the Chicago Street Theatre.

“I’ve kind of done everything I can possibly do in the restaurant business.” said Allen. He was a manager, a line cook, a pizza delivery, front of house, serving, hosting, and busing tables.

“I really like the restaurant business. I like the people,” said Allen.“For the next couple of years, I’m totally happy just being here.”

Allen says that his favorite part of working at Industrial Revolution is all the great customers that come in. He enjoys getting to know them and seeing them come back again. He also really enjoys his restaurant family.

In his spare time, he likes to still do some magic at birthday parties where his favorite part is making kids laugh by messing up tricks and being goofy. He also likes to read, one of his favorite authors being Stephen King.

You can meet Industrial Revolution’s own great actor, fighter coordinator and magician, Nathan Allen, the next you stop in for a bit to eat. The most interesting people you’ll ever meet could be the ones serving you dinner, cooking your food or pouring you an ice cold beer.