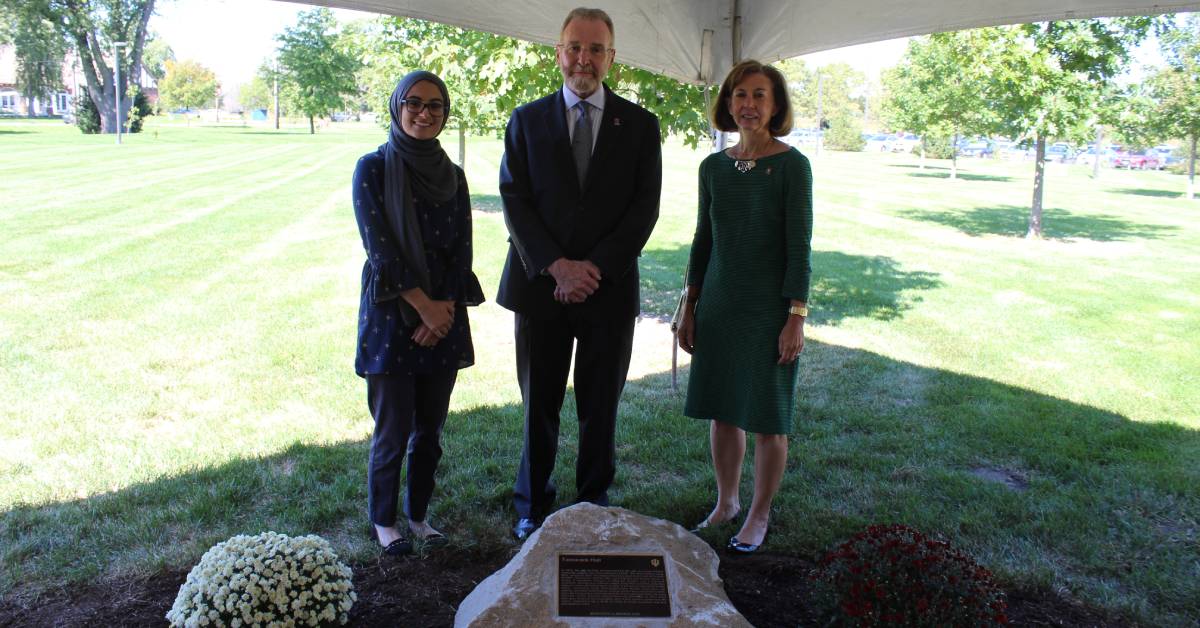 Indiana University Northwest (IUN) has been an institution in the Region for over half a decade and started to build its legacy with the legendary, now gone, Tamarack Hall. On Thursday, IUN honored their first building with a permanent marker placed where the hall once stood.

Tamarack Hall was first dedicated in 1959 and initially served as the entire IUN campus. At the time, it was known as Gary Main. 1,750 students studied, performed, and socialized in the building that served as the basis for the campus’ rapid growth.

“For half a century, Tamarack Hall was truly the cornerstone of IU Northwest,” said William J. Lowe, Chancellor of Indiana University Northwest. “It’s where the life and energy of the campus was centered. It was the only building for the campus’ first ten years.”

In addition to classrooms, the hall also hosted laboratories, the campus library, the student lounge and cafeteria, a bookstore, offices, and a 600-seat auditorium. In many ways, it served as a blueprint for what the university could be.

“It was a symbol, a beacon, of education in Northwest Indiana,” said James H. Capshew, University Historian for Indiana University. “Students young and old could acquire knowledge, skills, and attitudes for occupational qualifications as well as personal improvement.”

In 2008, the historic floods that inundated the Region surged through the university and destroyed Tamarack Hall. It was abandoned and then demolished a few years later, but its legacy continues in the Arts and Sciences Building just across Broadway and in the countless faculty and alumni that wandered through its doors.

“Though Tamarack Hall is gone forever, it still lives in human memory,” Capshew said. “By placing a historical marker here today, it will memorialize this important academic facility into the future. It was a facility that served as the embodiment of Indiana University’s aspiration to serve the entire state through the development of resource centers.”

The marker and dedication were created not only to commemorate Tamarack Hall’s impact on IUN, but as part of Indiana University’s collective Bicentennial celebrations. Each of these events tour the centuries of memories accumulated at IU’s campuses across the state, and each of the speakers at the dedication had stories to share.

“It was a lively place, and one I remember fondly,” said James B. Lane, Professor Emeritus of History at Indiana University Northwest. “The first thing I remember when I think of that old building is the great auditorium. When my kids were very young they’d go to children’s plays… we would have busloads for two weeks to three weeks on end of schoolchildren from this entire area enjoying those plays.”

The marker going up and the building coming down serve as more than acknowledgement of the past, but as a reminder of IUN’s constant evolution and growth.