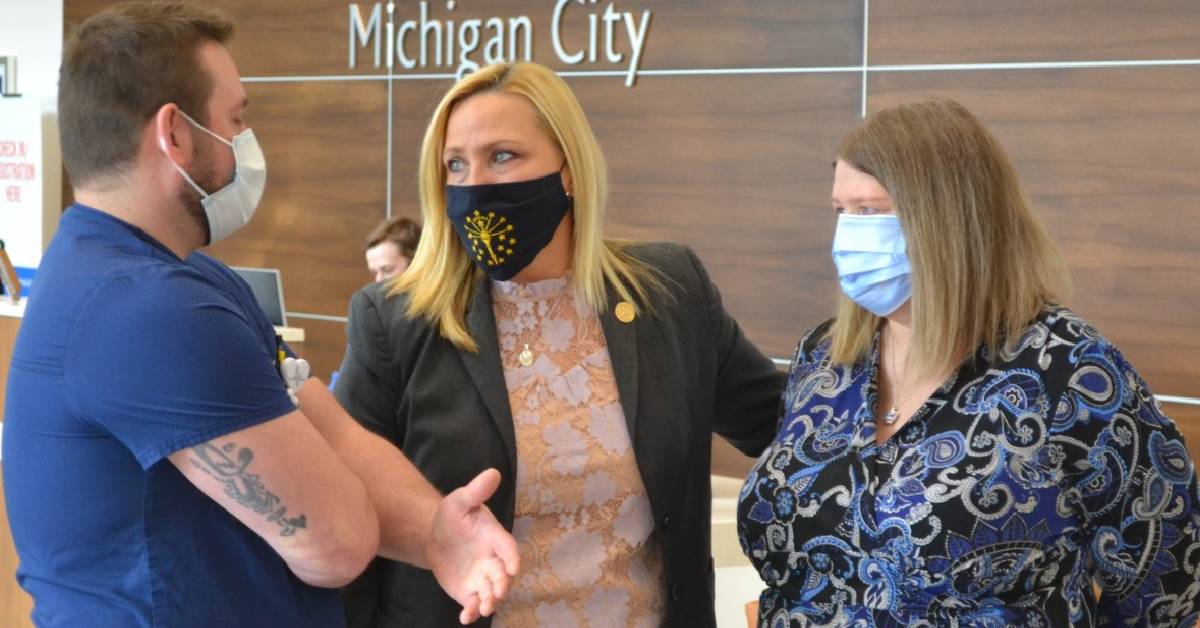 An Indiana lawmaker, inspired by the care her family received when they were hospitalized with COVID-19, visited Franciscan Health Michigan City to deliver a House resolution honoring healthcare workers.

Indiana State Rep. Wendy McNamara, who represents Evansville but is originally from LaPorte, spoke to members of the care team and hospital officials on April 9. She recounted how, in mid-November, her father, Terry Stump, was brought to Franciscan Health Michigan City and 12 hours later her sister, Tamara Stump, was also brought to the hospital.

“Within one day’s time, we have my dad and my sister both fighting for their lives,” she said.

One night, McNamara’s father called her and told her, “You need to honor these healthcare workers who are helping me.”

McNamara’s 88-year-old father eventually died from COVID, but she said his final day was his best day. “My dad was awake. He was alert. He got to say goodbye to everybody.” Her mother, Mayme Stump, said, “When my husband passed away, I was right by his side holding his hand.”

Tamara Stump, who said her condition was initially worse than her father’s, eventually recovered enough to leave the hospital. She said that even when she was moved to the ICU, her care team calmed her nerves. “They never once caused me to panic. They never made me feel like it was bad,” she said.

McNamara was joined by Rep. Jim Pressel, who said he lost his sister-in-law to COVID at around the same time that McNamara’s father died.

The two lawmakers presented a copy of the House Resolution honoring healthcare workers for their efforts during the COVID-19 pandemic and singling out the treatment provided to Rep. McNamara’s family by Franciscan Health Michigan City.

Before reading the resolution, Pressel emphasized, “The work that you guys do will never go unnoticed. But this is to make sure it never gets forgotten.”

Franciscan Health Michigan City President and CEO Dean Mazzoni said, “I’m just so proud of the work this team does every day, and it’s so nice to be honored this way,”

“Today is more about a celebration of you guys putting your lives on the line to protect those people and get them through the worst times of their lives,” McNamara said. “Today is a thank you personally from me; it’s a thank you from the state Legislature; and more importantly, it’s a thank you for my dad.”