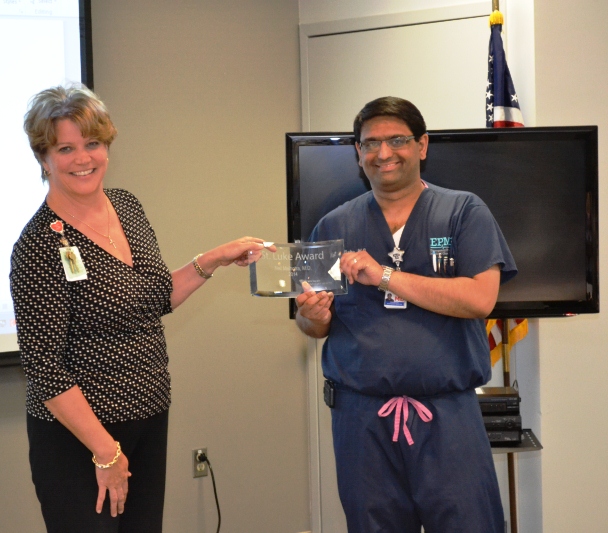 Neil Malhotra, M.D., an Emergency Department physician at Franciscan St. Anthony Health-Michigan City, accepts the hospital’s 2014 St. Luke Award from Trish Weber, vice president of operations and chief nursing officer, during a general medical staff meeting in May. The award, which has been presented since 2010 and recognizes physicians for their teamwork and cooperation with nursing staff members, is named for Luke, patron saint of doctors.

Weber said that among Malhotra’s nominations, nurses called him a role model who shows an ongoing commitment to patients and staff, is a good listener who loves to teach nurses, and has a calm, easy-going manner. Malhotra, who has been in his position since 2012, said he was surprised and “really happy” to receive what he called a great honor. He commended nurses for their teamwork, which he said results in better patient care, and said he chose emergency medicine for the variety of cases and patients it offers and because it gives staff a chance to help people, often through “the worst day of their lives.”