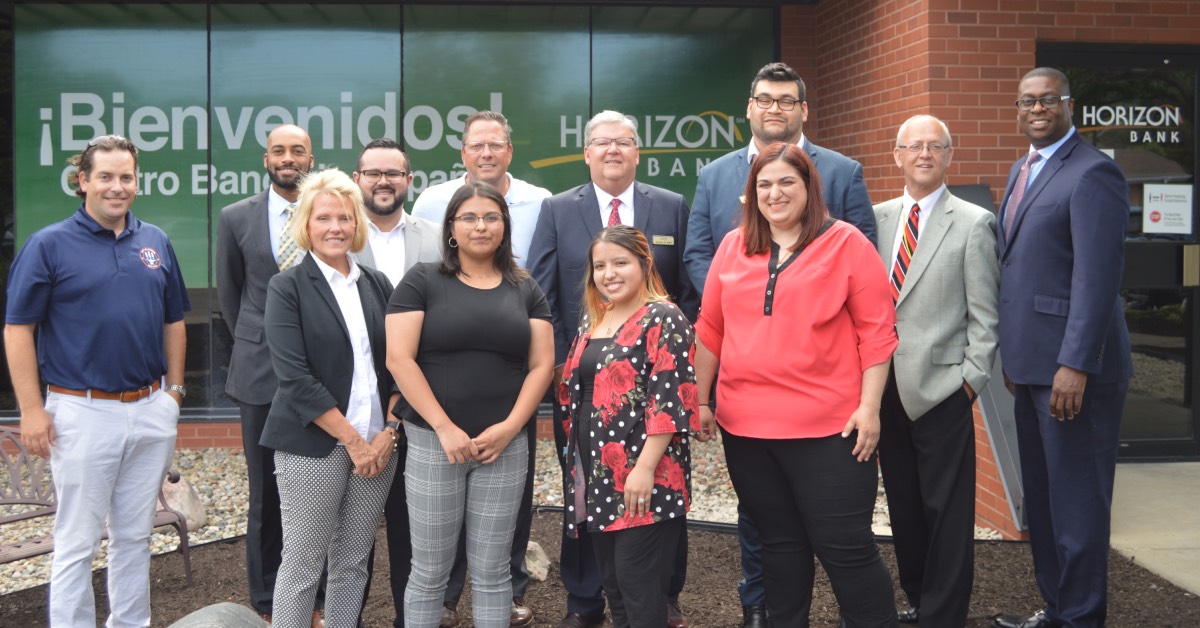 Horizon Bank celebrated its opening of the Horizon Bank Bilingual Branch in La Porte, the second of its kind, on June 17.

Many great figures in the La Porte community took part in celebrating the opening of the Spanish Banking Center. Those in attendance included: Mayor Tom Dermody and wife Jackie Dermody, Michael Riehle and Lindsay Jongkind of La Porte Economic Advancement Partnership (LEAP), members of the La Porte City Council and school board, and representatives from Horizon Bank’s Diversity Business Council.

It was a great day to support the community. Attendees were ecstatic for the Grand Opening to show La Porte that Horizon Bank is ready to meet residents where they are and serve them in whatever banking capacity they need.

“It's important to show the community that we are here and we're ready to serve them,” said Vega. “We've already seen an uptick in the amount of Spanish speaking customers. Individuals who normally would venture to other branches have made their way here to speak a language that they're more comfortable speaking. It's very inviting, and I can definitely tell an immediate impact.”

Vega stressed the importance of being an inclusive banking branch.

Advisors from Horizon Bank continually emphasized the idea of being a community and working together like a family. In this case, Horizon Bank truly is a family affair for Vega. Both his twin brother and cousin work for Horizon Bank as well. Vega’s brother, Simon, opened the Hammond and Whiting locations two years ago that kicked off the bank’s journey into bilingual services.

Reaching the community and all of its members is a paramount priority to Horizon Bank.

“It's for a grandma and grandpa that come in for help. They might speak Spanish and are afraid. When they find out that Advisors at Horizon speak Spanish, they tell their daughters and sons. Then, they tell their sister-in-law and brother-in-law. That's what we've experienced at Hammond and Whiting through word of mouth, and that's huge.”

Just like his brother, Simon Vega highlights that Horizon Bank is open to serve all members of the La Porte community.

Steve Kring, Regional President for Horizon Bank Northwest Indiana and the head of commercial banking for the Region, is proud of his company for expanding their services to those who need them.

“The organization is excited. This is the second bilingual, Spanish speaking center that we've opened. We feel as though there's a tremendous need for a Spanish banking center here in La Porte based on the demographics,” explained Kring. “We're just really excited to be able to offer products and services to everyone. We feel as though we have a social responsibility to help everyone achieve their financial goals. This is a step in the right direction.”

For Kring, opening up this bilingual bank is about providing quality service to a growing population in La Porte.

“Hispanic families and business owners can come in here and really feel comfortable that they're being heard and understood,” he said. “We're able to communicate with them how to best go about achieving whatever financial goal that they may have.”

Mike Riehle, President of Chamber Services for LEAP, commends Horizon Bank for connecting to communities who have been underserved in La Porte.

“The underserved community of the Spanish speaking population is a great area to focus on. Horizon Bank is obviously a good partner for that. They've always been a good partner with the community, always have been on the pulse of what's going on within the community as a financial institution, and will offer services that are going to benefit the Hispanic population in terms of mortgage, banking, and financial advice,” said Riehle. “I think that it’s a boon for not only the bank but for our community as a whole. It's going to help us move forward. We look forward to exciting momentum within the city.”

Mayor of La Porte, Tom Dermody, praises Horizon Bank for its continual support of the city.

“Thank you, Horizon Bank, for your partnership for a better community. The Hispanic population is so important to our growth. We want to make sure all families feel included in La Porte.”