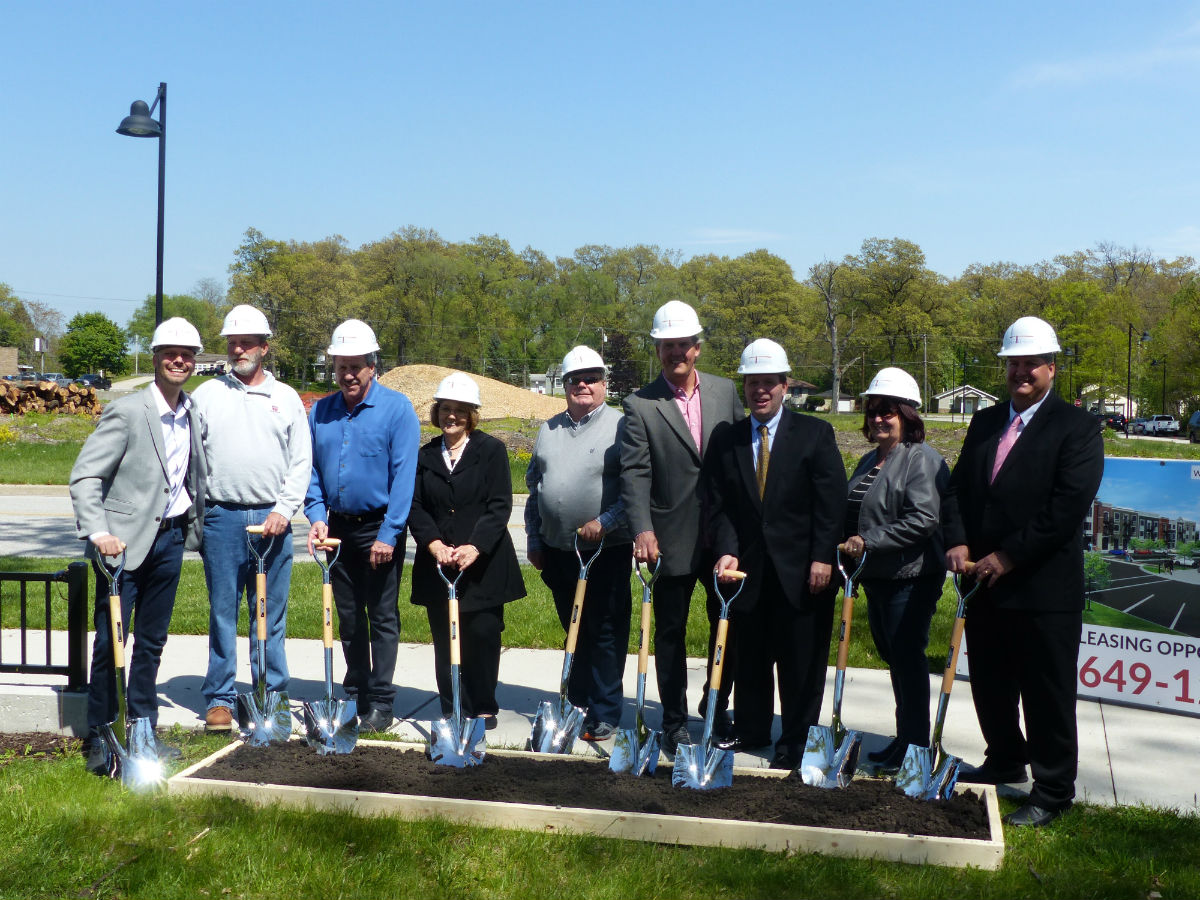 In recent years, Portage has truly become the “City of Growth.” With new shops, organizations, playgrounds, and parks, the City of Portage can add one more new project to the list: a downtown.

Thursday afternoon, the contractors of Holladay Properties broke ground for the $40 million development project that will pave the way for a multi-use space across Founder’s Square on Central Avenue. With the machines already plowing out the land behind them, the Portage community celebrated the new property, The Promenade at Founder’s Square.

“Construction has officially started,” said Drew Mitchell, Vice President of Development for Holladay Properties. “We have about 14 acres here.”

As part of phase one of construction, which will be completed in April 2018, the site will consist of five buildings: a restaurant, an office, retail, and residential space.

“We will start with building two, which is the leasing office, then the other buildings will follow three months later,” Mitchell explained, pointing to the buildings on a layout of the site. “We want to activate the whole space and tie it together.”

Each of the buildings will be made of various materials, he added, so that when the entire downtown project is done, it will not look like it was done all at the same time

The city has been working with Holladay Properties on this project for the last three years, Senior Vice President of Development Tim Healy said, in terms of planning and re-planning ideas and designs. It’s been a long three years, but it was worth it when Healy and the community members shoveled the first scoops of dirt on the new site.

“We are finally seeing the movers out here and we are so excited,” Healy said. “This is a huge project. They are getting that downtown, which is what Portage needs.”

Due to the rain and weather, construction has not been the most steady, he added, but soon the installation of infrastructure on the site will begin.

Many City of Portage faces gathered at the groundbreaking, including members of the Redevelopment Commission, the City Council, Mayor James Snyder, the Portage Economic Development, and the Greater Portage Chamber of Commerce, in addition to the members of the fire and police departments.

Jessica Bailey of the Chamber spoke on behalf of the entire group, saying how pleased they were for this finally to be happening.

“We are thrilled this is coming to fruition and will be able to offer the greater Portage community all these amenities, in addition to more residential apartments,” Bailey said. “But to have a downtown space… it will help the community in general.”

Niki Avina of Hannah’s Hope spoke as well, telling the audience more about the playground and how The Promenade will help strengthen that inclusiveness of the Hannah’s Hope playground with the rest of the downtown residents.

As construction begins, Mitchell is also marketing out to businesses and future residents, to occupy the finished the building space. This project is the largest project in Holladay’s history and it could not have been planned and construction could not have begun without the help of those who shared this downtown dream for their city, Mitchell said.

Mark Oprisko of the Town Council thanked Holladay for planning this new space for the City of Portage.

“This is a great group and the city has always worked well with this group,” Oprisko said about Holladay. “When you look at this vision and the beautiful buildings going up, the foot traffic is going to be fantastic. Portage will finally have a downtown!”

For information on Holladay Properties’ development, leasing and property management services for The Promenade, contact Michael O’Connor at 219-764-3104 or go to www.holladayproperties.com.