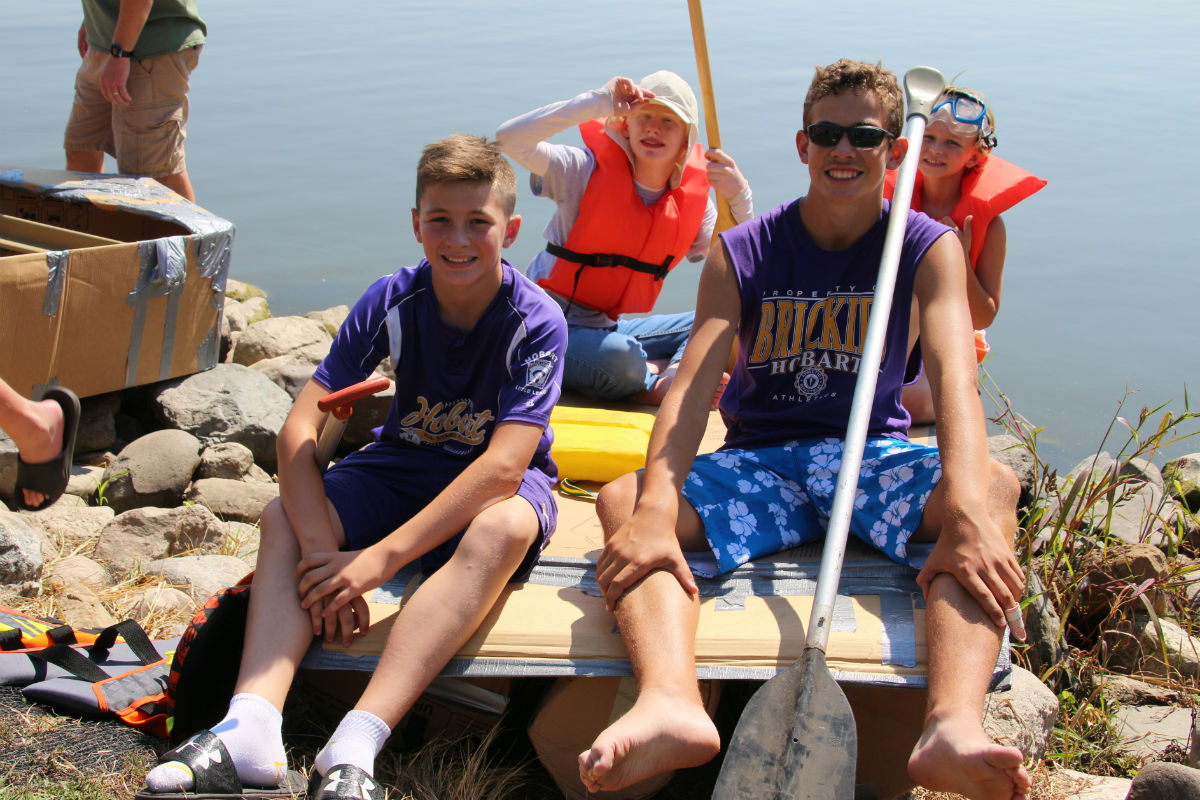 There are plenty of perfectly fine materials to build a boat out of. You can build a boat out of wood, out of fiberglass, out of aluminum, or any other countless materials commonly used in building boats. But cardboard and duct-tape? Enter the 6th annual Hobart Dam Duct Tape and Cardboard Boat Regatta, where community members and even community organizations construct a small boat out of cardboard and duct tape and race in Hobart’s Lake George as part of the annual Hobart Lakefront Festival.

While the festival was huge on Saturday, one of its biggest and busiest day, with a bounce house village, ponies for children to ride, rock painting, live bands, a beer garden, and numerous vendors and food stands, the main event was the race, which saw hundreds of people gathered to see the spectacle of boats made out of some of the least waterproof materials made by man paddled out to the center of the lake, around a buoy, and back.

“The highlight of Saturday is definitely the Cardboard Regatta,” said Nikki Lopez, Event Director for the City of Hobart. “We have a lot of people coming out for that.”

Attendees and competitors swarmed the shore of Lake George to see if all of the boats would make it across. Of the six competitors, there was a boat styled after a small canoe- representing Mickey D’s Bar of Hobart, piloted by Bryan Elliott and Mark Dacey, two boats, a double-hull style and a pontoon-style piloted by local Boy Scout Troop 65, a Chicago Bears-themed boat named The Monster of Midway, and a large island-like boat called the Isla Morada. The returning champs from the previous three years was there, too; Dan Silich and his son Adam, dubbed the “Corngetters” after their honor-system based corn stand in front of their house. Their boat was styled after a long dugout canoe, streamlined for speed.

“We’re gunna go out there and hit that buoy and come back first!” Silich said before the race.

Other competitors were aiming to take down the Silichs’ dynasty. Troop 65’s Alex Nolan was confident about their teams’ chances at an upset.

“We’re definitely going to give the Corngetters a run for their money,” said Nolan. That being said, the team knew that winning isn’t everything.

“Our strategy is to have fun and do our best.” Nolan added.

Randy Griffith, Sr. was out to support Troop 65, who competes every year, and enjoys attending these events.

When the race started at exactly 3:00 PM, it seemed as though the Corngetters were getting more than their fair share of competition. The Mickey D’s boat, The Monster of Midway, and the double-hulled boat from Troop 65 seemed to be neck-and-neck with the Corngetters, but soon fell behind as the sleek and dynamic shape of the Corngetters’ dugout took the lead.

About a quarter of the way through the course, Troop 65’s pontoon boat began taking on water and the crew were forced to bail. Two of the crew re-boarded while a third attempted to push the waterlogged craft through the course, however he had to abort when the boat sank beneath the surface.

Isla Morada, while it stayed relatively dry, seemed to be a victim of its’ own design and fell far behind the rest of the pack. Meanwhile, The Corngetters had already rounded the bend with Mickey D’s and The Monster of Midway close on their heels.

In the end, however, it was the Corngetters who got their fourth first-place award finish, with Mickey D’s coming in a close second and Midway coming in third. At the awards ceremony, Mayor Brian Snedecor of Hobart was presenting the winners in each category.

“When this first started,” said Snedecor, “a lot of people didn’t really understand what it was about. Each year, however, it’s grown in excitement. With all of the activities going on here at the Lakefront Fest, it just gravitated hundreds of people to watch it on either side of the lake.”

Mayor Snedecor holds a lot of respect for the competitors.

“We’re using cardboard and duct tape. When you can build something like that to keep from sinking, that’s an art. It’s a lot of fun.”

There was a “Titanic Award,” presented for the best sinking, presented to Troop 65. The “Best Design” award went to Isla Morada for their tropical island-themed raft, and second and first place awards, which went to Mickey D’s and the Corngetters, respectively. After the race, Dan Silich was more than pleased.

“It’s the greatest feeling in the world,” said Silich, who was proud of the turnout for the festival and the race. “It’s a bunch of beautiful people and we’re glad that they come out for this event.”

But how can Silich and his son win every year for four straight years? What’s their secret?

Well, take it from Silich himself: Confidence, Teamwork, and Perfection!

For more information about the Hobart Lakefront Festival, go to www.cityofhobart.org.