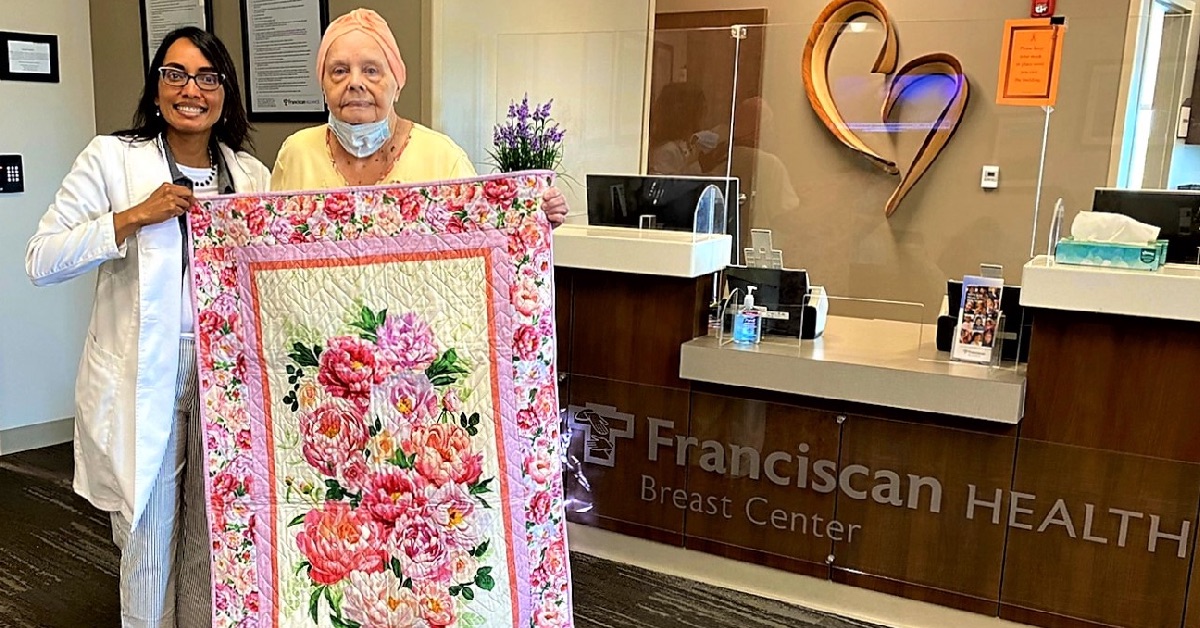 Joellen Mihalov credits her mother with her spirit of giving.

“We were always taught to give instead of receive,” the 84-year-old Hammond woman said.

Mihalov is a breast cancer patient the Munster Breast Center at Franciscan Health Munster. Her cancer journey started in March when she discovered a hard, inflamed lump in her armpit. Mihalov’s mother and two sisters died of cancer as did several of her extended family members.

“I knew right away what it was,” she said.

Breast imaging radiologist and medical director for the Munster Breast Center at Franciscan Health Munster Sheela Konda, MD, PhD, said telling a patient they have cancer is one of the most difficult aspects of her job.

“No matter how many biopsies they have had, it is never easy,” Dr. Konda said. “During the short time period I got to know Joellen, not only from a patient perspective, but as a person, I knew she always spoke her mind and was fearless.”

During one of their conversations, Mihalov told her doctor about her love of quilting. Konda said she had a quilt made by a former patient at a previous location and would like to have another for the Munster Breast Center.

Mihalov asked Konda what her favorite colors were and got to work on the quilt with her daughter.

Mihalov’s mother taught her to sew when she was a young girl growing up in West Virginia. In the 1980s, she took a quilting class and since then, taught her daughter as well. Mihalov has made more than 200 quilts, all of which she has given away as gifts or donated to fundraisers.

“I never take a penny,” Mihalov said. “I just love to do it and for other people to see them.”

Her daughter, a retired school teacher in Monroe, N.C., visits every summer and they work on various aspects of the quilts together.

Mihalov presented to the quilt to Dr. Konda during one of her recent appointments.

“The quilt is a perfect addition to the consult room, which is the first place my patients know they are getting a biopsy,” Konda said. “The quilt has a calming effect in the room and also represents resilience.”

Mihalov was diagnosed with stage 3 breast cancer in May. Since then, she has undergone chemotherapy to reduce the size of her tumor. She’s lost her hair in the process and has neuropathy in her hands as a side effect of the chemotherapy, which makes quilting difficult.

“I don’t get angry,” she said. “I’m always up, always positive. You can’t get mad about things. It doesn’t help.”

Dr. Konda said Mihalov is, “proceeding through this journey with grace and a positive attitude, beautifully captured by the quilt with beautiful flowers and greenery, representing new beginnings, hope and courage that I hope every patient sees when they look at the quilt.”

Mihalov said she finds comfort in the compassionate care of the Breast Center team.

“If anybody has to have breast cancer care, go to Franciscan,” Mihalov said. “Everyone there is just wonderful. I told the doctor the other day, ‘I don’t worry about this cancer because I know I’m in good hands.’ They’re so comforting and reassuring. I love them to death.”

October is Breast Cancer Awareness Month, an annual campaign aimed at increasing awareness about the impact of breast cancer. This year’s National Breast Cancer Foundation, Inc. theme is “Together we RISE,” which stands for Rally in Screening Everyone.

The Munster Breast Center is located at the Franciscan Health Cancer Center Munster, 701 Superior Ave. To schedule an appointment or for more information, call (219) 922-4070.