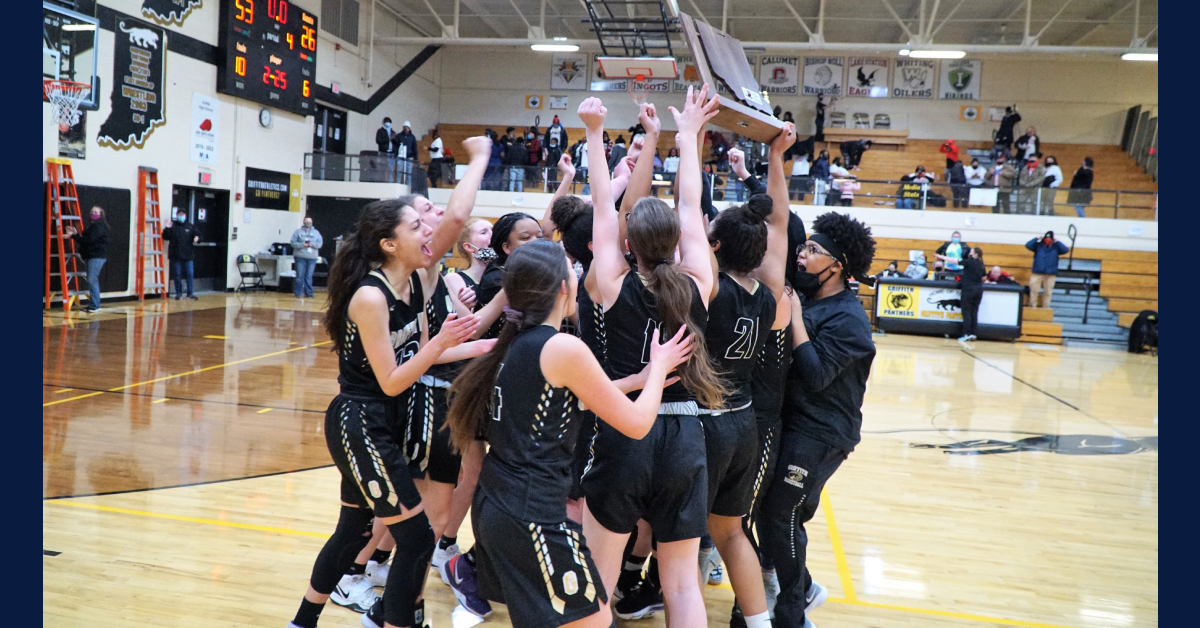 If revenge is a dish best served cold, then it was a very chilly night at Griffith High School, as the Panthers defended their home court against their rivals, the Warriors from Calumet New Tech.

Last season, Griffith was knocked out of sectionals early by the Warriors, who handed the Panthers a 47-38 loss on the Warriors home turf. The Panthers finished last year 15-9 overall.

This year, the tables turned as the Panthers, under the direction of head coach Ken Anderson, switched up their defensive strategy, improving to 13-3 overall in a season marred by challenges necessitated from dealing with COVID-19.

“This was a big win for us, said Anderson. “We haven’t won sectional in eleven years. I just joined Griffith here last September, so it’s been a work in progress but we got the win ,and we have some really happy faces here right now.”

Anderson admits to having a different style of coaching than what the girls were perhaps used to.

“I’m a little bit different in my intensity level. I’m different in terms of my defensive strategies, but we re-worked what we do and tonight, we played a really good game.”

“We weren’t looking to milk this thing out. We were looking just to hold them (Calumet New Tech) to less points than what we had at halftime, and that’s what we did.”

“We were missing out starting point guard, #00, Cierra Pipkins, but she got some physical therapy and told us that she felt able to play this week. That was huge for us because it allowed us to be able to get back to our regular rotation. That’s something that we haven’t been able to do for the past few weeks, so that was a big add for us in this game and allowed the rest of our players to go ahead and do what they do.”

The Panthers came out strong in the first half of the game, putting up 18 points by the end of the 1st quarter, then adding another 14 points, going into halftime with a 32-8 lead over Calumet New Tech. #21 Julissa Hamm mercilessly hammered the basket in the first half, nailing 2-point field goals and free throws, and setting herself up for a team-high 16 points for the game. #31 Ariel Esquival and #23 Marissa Esquivel also had strong showings, each of them adding 9 points to their team's score.

The Warriors fought back as much as possible, led largely by the perseverance of #23 Jasmin Barker. The 5’10” senior G/F posted 14 points during the game, but it just wasn't enough to overcome the strong Griffith defense, with Calumet New Tech eventually falling to the Panthers, 53-26.

“This win really means a lot to us. New Tech is in our conference. We had played them earlier this year, and it’s hard to beat a team twice in one year. They came out and played great in the playoffs this year,” Anderson said.

“We’ve had different coaches, different strategies, but we banded together as a team to do what we had to do to get this done,” Hamm said.

“We’ve been working hard for this for the past four years. In my sophomore year, we ran short. Then, last year, Calumet totally took us out in the first round of the sectionals, so we never had a chance to get to this point.”

For #31 Ariel Esquivel, senior guard for the Panthers, tonight’s win was especially satisfying.

“This feels amazing. To be here, to be able to get back at Calumet for destroying us last year, just feels great. They beat us last year on their court and we weren’t going to let them do that to us again this year, not here, not on our court,” Esquivel said.