Central Church of God experienced a gospel music legend as Armond Morales and his wife Bonnie delivered their combination of testimonies and Morales’s vocal gift. 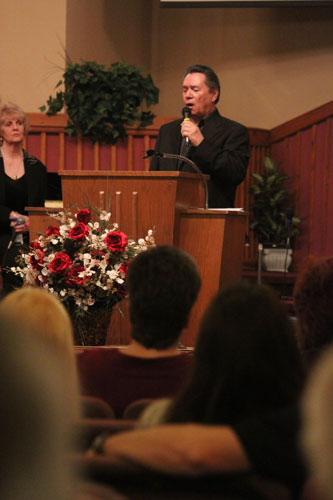 For 42 years, Morales was the bass vocals in the four time Grammy award winning band, The Imperials.

Morales performed a set involving gospel hymns, praise and worship and inspirational songs like “You Raise Me Up.”

Morales shared his testimony about being healed of colorectal cancer. He was diagnosed in 2000 and was told he would lose his hair, get sores in his mouth and lose energy during the treatment.

Bonnie said through God, Morales did not experience any symptoms.

Pastor Jerry Martin said he was pleased with the Morales aspect of ministry.

“They were impacting and helped people to release their faith in God,” Martin said.

After the performance, the Morales prayed over everyone interested in receiving healing.

Morales said the Portage churches, including Portage First Assembly, have treated them well with their courtesy and hospitality.

Despite the decline of the economy Morales said it has not affected him because when God’s people feel the anointing they will give to help out.