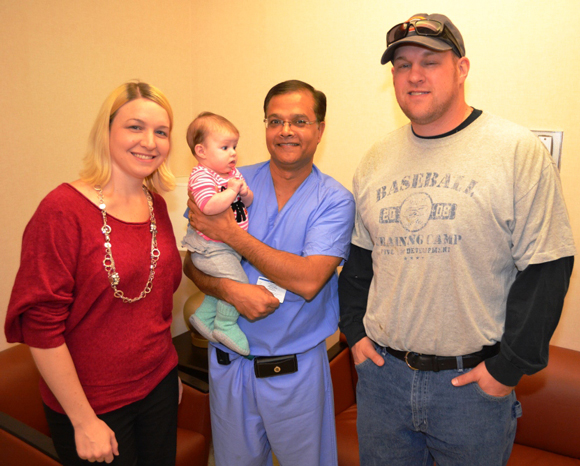 Franciscan St. Anthony Health-Crown Point’s Neonatal Intensive Care Unit offers a new weapon to combat birth hypoxia, a relatively rare occurrence in which oxygen flow to a newborn’s brain is impaired due to a number of possible causes.

And parents Karen Rothe and Josh Waytovich, of Highland, couldn’t be more thankful, since it proved key to their daughter Kate Waytovich’s recovery.

“This is a standard of care that improves outcomes significantly for birth asphyxia that generally cannot be foreseen or prevented and we are the only hospital in Northwest Indiana to have the selective brain-cooling device,” said Sudhish Chandra, M.D., NICU medical director, adding patients must be at 36 weeks or more for it to be employed.

The latest case occurred after cord prolapse – when the umbilical cord leaves the uterus before the baby, stopping oxygen flow.

“Kate broke her own water and her head was crushing the umbilical cord,” she said, adding, “The staff noticed her heart rate had decreased, diagnosed the cause and immediately went into action to have an emergency c-section performed.”

Chandra said the cap, which resembles a shower cap, and its operating components must be activated within six hours after birth. The system includes a control unit to monitor treatment and a solid state cooler that sends water to circulate inside a plastic housing in the cap. The head is cooled to 33.5 degrees for 72 hours and then gradually warmed during a four-hour period. Studies have shown the cooling process significantly reduces the risk of brain injury due to asphyxia, Chandra added.

Chandra said only a few such cases have been seen since the unit opened two years ago.

Waytovich, who said his daughter is doing well and has shown no ill effects, praised Chandra and the NICU staff for their role in handling the ordeal, adding, “It was a blessing we were here. We were in the right hospital at the right time. It’s still shocking to think about what happened and what could have happened. Dr. Chandra was very thorough and about explaining everything that was going on.”

“I don’t want to think about what could have been, had they not had the cooling cap here. Everything fell into place and the staff was wonderful. God had his hands in it, for sure.”

NICU nurses Patti Pirkle and Teresa Trinks, who also were involved in the case, said the cooling cap likewise benefits parents, since they no longer have to deal with the stress of driving to Chicago or other areas to which an infant previously had been transferred, besides that of worrying about a child’s condition.

“We try to keep everything family-centered and provide support. If we can change the outcome for one baby and family, it’s all worth it,” Pirkle said.