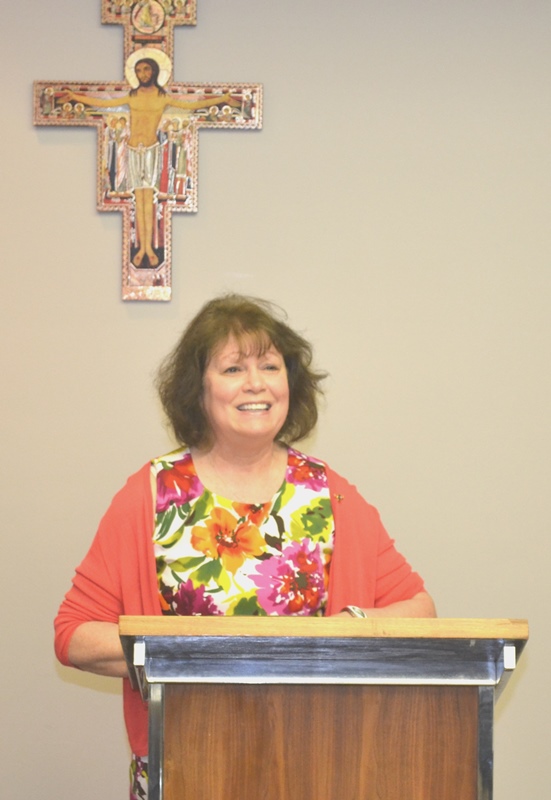 Mary Ann Augustine addresses a packed house May 6 after receiving the annual Florence Nightingale award, presented by the Franciscan St. Anthony Health-Crown Point Performance Council of Shared Decision Making, to nurses who exhibit excellence in care through compassion, commitment and accountability, and who show outstanding dedication to the mission and values of Franciscan Alliance. Augustine, of Demotte, an Intensive Care Unit registered nurse, has spent 37 of her 45 years in the profession at Franciscan St. Anthony. Among the accolades she received from peers, Augustine was called caring and sincere in her words and actions, a great team player who never complains and takes care of families, as well as patients; and one whose sense of humor “lights up the ICU.”

Augustine said she was stunned and shocked to learn she had received the honor. “It came out of the blue,” she said, adding, “I was chatting one day and a group of nurses came over with balloons and flowers and told me I had won the Nightingale. I was clueless; and excited to get it.” Augustine said she felt her career calling during her latter years in grade school. Asked her philosophy of nursing, Augustine replied, “Nurses have to pray and have faith in God, as well as have a good attitude and do their best daily, in whatever job they do.” The award is named for legendary nurse Florence Nightingale, who is called the founder of modern nursing.