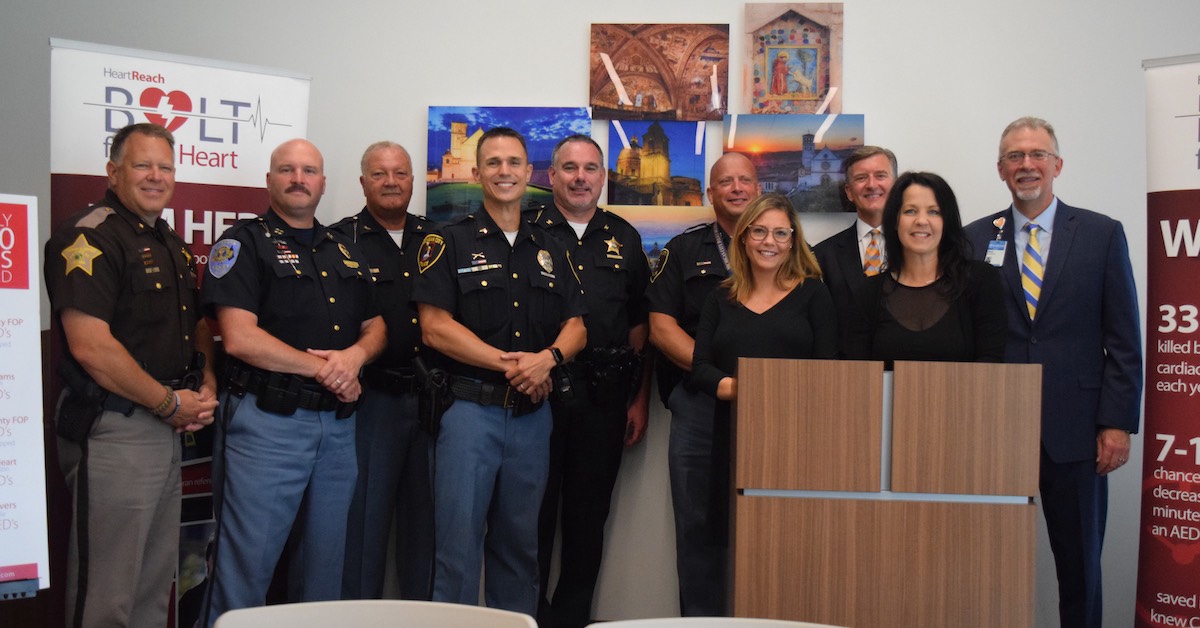 Franciscan Health Michigan City announced its partnership with Bolt for the Heart and the Play For Jake Foundation on Tuesday that will sponsor a family fun 5K in Washington Park on September 8. All proceeds from this race will benefit Bolt for the Heart’s goal is to place an automatic external defibrillator (AED) in every La Porte County police car. Bolt for the Heart has already purchased and donated over 600 AEDs in the central Indiana area and provided an AED for every state trooper patrol team. These measures have saved 12 lives thus far.

Dean Mazzoni, President and CEO of Franciscan Health Michigan City, was excited to announce Franciscan’s partnership and the meaning behind the 5K.

“We’re excited about this event because it lines up with one of our core values, which is respect for life,” Mazzoni said. “The idea that we’re getting people out in an active, healthy way, encouraging wellness, and partnering with Bolt for the Heart and law enforcement to get these much needed AEDs out into the community means a lot.”

La Porte County is the second largest county in Indiana with over 600 square miles and a population of more than 111,000 people. However, there are only seven ambulances throughout the county, but over 20 officers on duty at any given time. La Porte County Sheriff John T. Boyd shared just how important having an AED is with statistics like these.

“Oftentimes we are in close proximity to help, but sometimes we lack the tools to be able to help efficiently,” Boyd said. “Providing us with AEDs will provide us with the tools to save lives and put us in a position where we can make a difference.”

Many in Northwest Indiana have heard about the story of Jake West, the 17-year-old football player who died suddenly in 2013 during football practice because of an undetected heart condition. Jake’s mother, Julie West-Schroeder, started the Play For Jake Foundation to raise awareness for the danger of undetected heart conditions, which is the reason she decided to partner with Bolt for the Heart and support the 5K happening in September.

Bolt for the Heart was founded in 2010 by Pierre Twer as an extension of Heart Reach Michiana. As of now, Bolt for the Heart’s goal is to place an AED in every law enforcement vehicle in the state. With four counties down and 88 to go, they decided to start right here in Michigan City.

“I’m really excited about the enthusiasm for this event,” Twer said. “I have often felt that Michigan City is a great opportunity for a big running event.”

Twer detailed the three main reasons Bolt for the Heart decided to put AEDs in police cars, one of them stemming from the negative image surrounding some police departments.

“If people could see what [police officers] go through on a daily basis, they would be a lot more understanding,” Twer said. “If we have the opportunity to place these AEDs in your hands and start saving lives, the image of police will better reflect their service.”

The second reason is for officers to have the ability to protect their own. In an instance where one state trooper went down in sudden cardiac arrest, his partner was mere seconds away with an AED. He shocked his partner’s heart and the downed trooper’s heart instantly started beating again.

The third part is that EMS vehicles are parked in a garage and waiting to be dispatched. Police officers are patrolling the road at all times.

“Nationally, EMS vehicles arrive on scene within eight to nine minutes,” Twer said. “First responders and police officers are there on an average within three to four minutes, so that person’s likelihood of survival just went up 50 percent.”

To raise awareness about the importance of AEDs, there are three ways you can help. One is to look for AEDs wherever you go. If the building doesn’t have one, ask, “Why not?”

The second is to register for the 5K in Washington Park in Michigan City on September 8 at 8:00 a.m., which will raise money to put AEDs in every law enforcement vehicle in Michigan City and La Porte County.

Lastly, Bolt for the Heart will be selling stickers that will go in the back window of every police car. Each sticker will have the Bolt for the Heart logo, the Franciscan logo, and will say, “This vehicle has an AED on board courtesy of [your company]”. These stickers can be sponsored for $1,295, which is also the cost of one AED.

To sign up for the Bolt for the Heart La Porte County 5K presented by Franciscan Health on September 8, go to www.boltfortheheart.com.

To find out more about Play For Jake, visit www.playforjake.org.