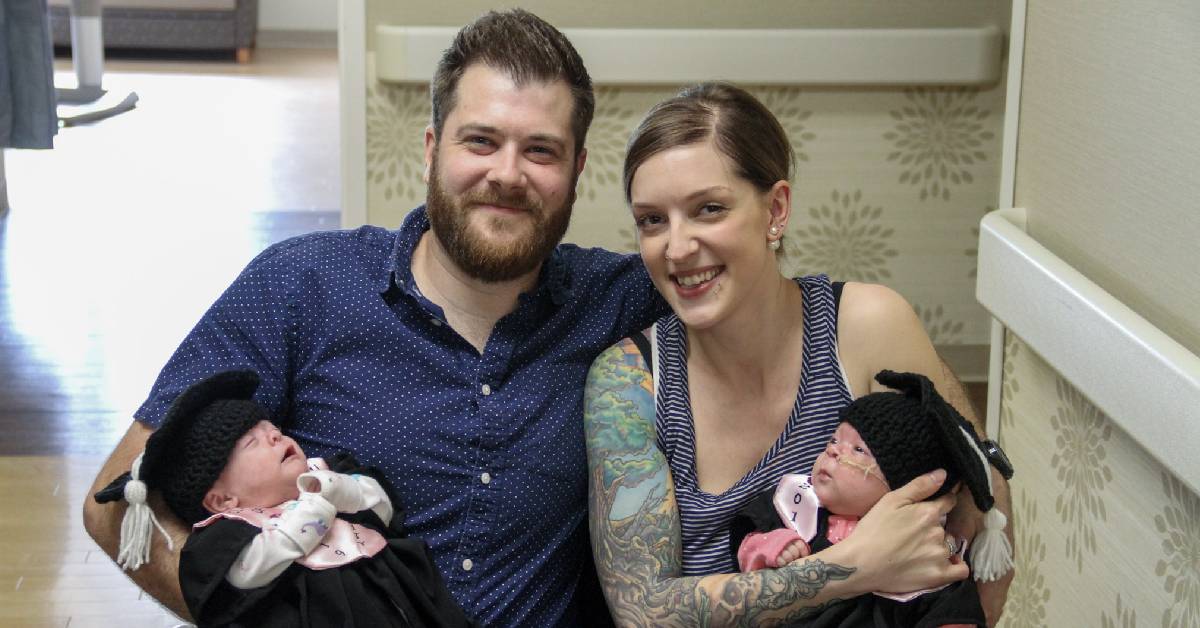 CROWN POINT | The strains of “Pomp and Circumstance” aren’t just for Northwest Indiana’s high school and college graduates. A new program honors “graduates” of Franciscan Health Crown Point’s NICU, who may be smaller in stature, but not in accomplishment.

NICU Manager Edy Oliver said the idea of a graduation ceremony came from the nursing staff, who make the tiny caps and gowns given to babies when they are sent home. The hospital intercom plays “Pomp and Circumstance,” letting staff know that another tiny child is heading home.

“These families and these babies go through a lot, so we really wanted to do something that would honor them and to acknowledge everything that they’ve gone through, because it is an accomplishment,” she said.

Two of the first graduates of the program were twins Nellie and Aspen Glenby, who were born Jan. 27, nearly 15 weeks before their due date, weighing less than 2 pounds each. Their parents, Sara and Danny Glemby of Crown Point, spent the next four months with their daughters in the Franciscan Health Crown Point NICU.

Nellie went home in late May, then when Aspen was ready to be discharged June 3, the family received their graduation sendoff. “There’s no way that I could be any happier than that day, when they both came home,” said Danny Glemby, recalling the overwhelming feelings of peace and relief when they exited the NICU for the first time as a family. The parents say both girls are healthy and doing well at home.

In a way, the parents are “graduates” as well, learning how to care for their children under the tutelage of the NICU staff. “I definitely think it prepared us a little bit more,” Sara Glemby said. “No one would wish that, but the nurses answer a lot of questions you come up with in four months.”

“They just pumped us full of knowledge for those 127 days. You come home with that knowledge and you just feel so much better about things,” Danny Glemby said.

Sara Glemby said the time they spent in the NICU was “as good of an experience as it could be” considering the circumstances. “I feel like they prepared us for everything, except having two babies at home,” she said with a laugh.

“We knew there was so much love from the staff there that took care of them,” Danny Glemby said. “It was kind of bittersweet that we’re leaving those nurses, because we got kind of involved in their lives.”

The Franciscan Health Crown Point NICU graduation program is being done for babies who are in the NICU for longer than 30 days. The handmade caps and gowns will be keepsakes long after the babies outgrow them.

“It’s something they can put in their baby box,” Oliver said.