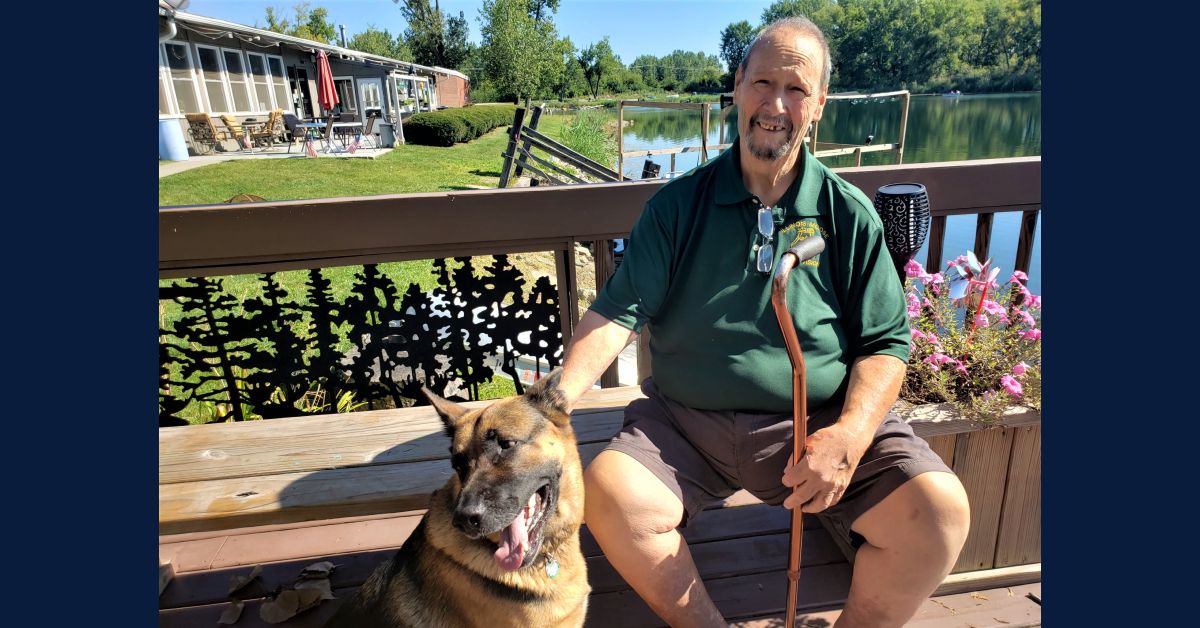 As a member of the Loyal Order of Moose, John Oakley lives by the motto, “A burden heavy to one is borne lightly by many.”

That same approach by a multidisciplinary team at Franciscan Health Crown Point is being credited with saving the 67-year-old Sauk Village man’s life, allowing him to spend more time supporting the charitable efforts of the Chicago Heights Moose Lodge.

In the summer of 2021, Oakley suffered from congestive heart failure, narrowing of the arteries, an irregular heartbeat, severe sleep apnea, high blood pressure, obesity and diabetes. He also relied on oxygen to combat shortness of breath.

After two hospitalizations for congestive heart failure, Oakley was evaluated at a Chicago academic hospital for a heart valve replacement procedure. When doctors there told him he was not eligible, he sought a second opinion closer to home.

Oakley told Dr. Tuchek before his surgery that he neither had nor wanted a “do not resuscitate” order.

“He said very specifically, ‘If I’m not brain dead, I want to live,’” Tuchek said.

Roughly 42 percent of cardiac surgery patients at Franciscan Health Crown Point are discharged within three days, representing one of the fastest discharge rates in the industry.

“That’s one of the big advantages here and something we all take pride in,” Dr. Tuchek said.

Oakley experienced multiple setbacks following his surgery and spent five weeks in the intensive care unit. He was on a ventilator, received multiple blood transfusions and underwent dialysis for kidney failure. He was treated for blood clots, fluid in the lungs, infections and received speech therapy to help with swallowing.

“This wasn’t three nurses in three days and home,” Dr. Tuchek said. “It truly took a village. It took every health care specialist here to get him through this and into rehab, then get him home.”

“I personally helped him stand at the bedside, his first time standing in a month, and take two steps,” Dr. Tuchek said, adding that Oakley nearly passed out due to his deconditioned state.

The health care team made it their mission to ensure Oakley knew they were never going to give up on him.

From there on out, Tuchek instituted what he called “The Oakley Effort,” which required one member of the surgical team to visit with Oakley once an hour.

“One of us would help him eat, stand, just engage with him and keep him focused on his recovery efforts,” Tuchek said.

Oakley said he and his family appreciated the compassionate care of the Franciscan Health team.

“The doctors and nurses, therapists, just everyone was always encouraging and positive and helped move me forward every step of the way,” he said. “It was a combination of all of them working together. The people working with me in therapy all said, ‘Dr. Tuchek wants you to do this and says he knows you can do it.’”

Oakley said he comes from, “a full, loving family,” who supported and encouraged him as well.

“I have six sisters and someone was there for me every day,” Oakley said. “I’m the oldest and I wasn’t ready to say goodbye.”

After 46 days in the hospital and rehab, Oakley went home. He is now back to his volunteer work at the Chicago Heights Moose Lodge with his beloved dog, Missy, by his side and feeling better than ever.

“Before, I could maybe put in one hour and I couldn’t do anything else,” Oakley said. “Now I’m putting in eight, 10, sometimes 12 hours a day.”

Franciscan Health Crown Point earned the highest possible three-star rating from The Society of Thoracic Surgeons (STS) earlier this year for its patient care and outcomes in isolated coronary artery bypass grafting (CABG) procedures, more commonly known as open heart surgery. The three-star rating is the highest measure of quality attainable and makes Franciscan Health Crown Point the only such program in Northern Indiana, placing the hospital among a small percentage of elite healthcare facilities for open heart surgery in the U.S. and Canada.

Tuchek said Oakley’s experience illustrates the benefits of the multidisciplinary approach Franciscan Health Crown Point offers patients without having to leave the region for routine and complex heart surgeries alike.

“Some patients say they don’t have a ride, won’t drive on the expressway, whatever it is and the reality is, they die because they won’t go get the treatment,” Dr. Tuchek said. “You don’t have to travel for better care. It’s right here. We have university-level care in a community setting by experienced professors of cardiac care.

“Mr. Oakley is here because he had supremely experienced heart surgeons right here close to home and a talented, dedicated multidisciplinary team of health care professionals who pushed him to recover and get stronger while encouraging him and supporting him literally every hour for weeks. He had an extended health care family in addition to his own relatives who could be right here with him, making it much easier than if they’d had gone to Chicago, particularly given the length of his stay.”