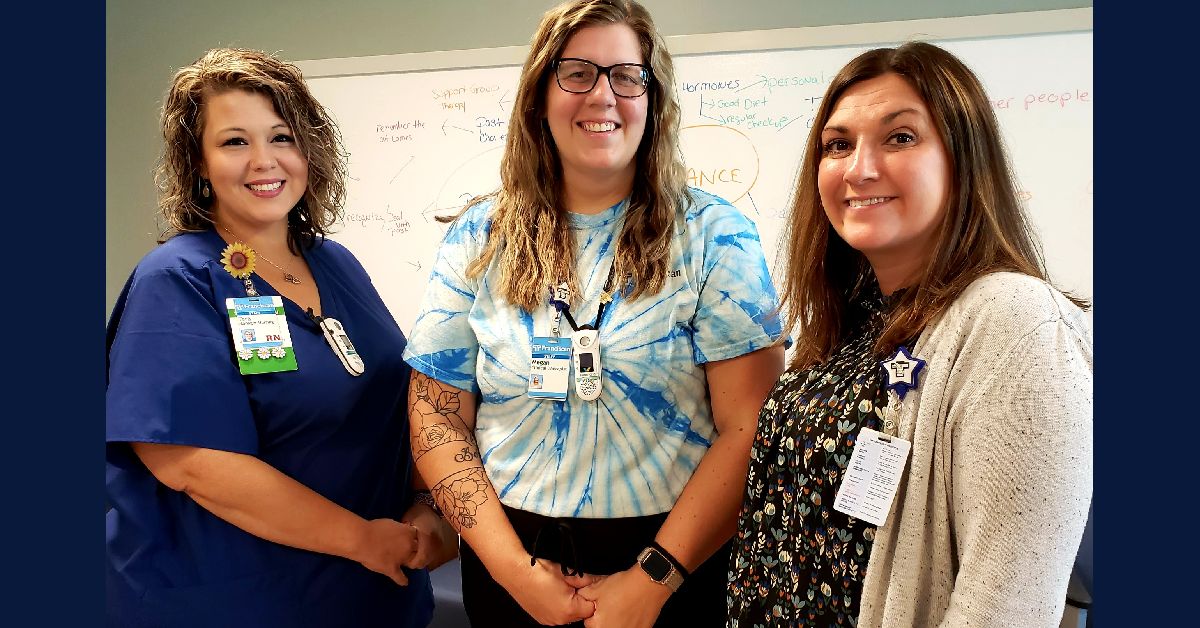 Franciscan Health Michigan City behavioral health professionals are urging people to talk to those potentially in crisis and to utilize available resources in an effort to help prevent suicides.

The issue is being highlighted ahead of National Suicide Prevention Week. The Sept. 4-10 event, organized by the American Foundation for Suicide Prevention, aims to create awareness and help people learn how they can play a role in saving lives.

Experts encourage anyone who thinks a friend or loved one may be contemplating suicide to ask them if they are thinking of hurting themself and if so, to get them help immediately.

“It’s important that people understand it can happen to anyone at any age,” Darrah said. “Every family has mental health issues. It doesn’t matter if you’re rich, poor, successful. It does not discriminate.”

Suicide is one of the top 10 leading causes of death in the U.S. and rose by 30% between 2000 and 2020, according to the Centers for Disease Control. Efforts are underway to reduce the national suicide rate by 20% by 2025.

One new tool available is the 988 Suicide and Crisis Lifeline, launched in July by the U.S. Department of Health and Human Services’ Substance Abuse and Mental Health Services Administration. Those seeking assistance can also text 988 or chat online at 988lifeline.org.

The hotline connects those seeking assistance to a local network crisis center staffed with trained counselors who listen, provide support and share information about local resources. If the caller is in imminent danger that cannot be resolved during the call, the crisis counselor may connect with local emergency responders in an attempt to save the caller’s life.

The 988 hotline system currently has 160 crisis call centers, including three in Indiana.

Darrah said national public education campaigns like those supporting the 988 hotline coupled with celebrities and professional athletes being more open about their own mental health challenges are leading to more open dialogue.

“My generation and younger are much more open to talking about their mental health,” Darrah said. “Twenty-year-olds will talk about their anxiety and depression and their meds very openly. I think we still have work to do but we are moving forward.”

The CDC reported in February that the increase in anxiety and depression among Americans during the COVID-19 pandemic did not correlate to an increase in suicide rates.

Megan Wichlinski, supervisor of clinical therapy at Franciscan Health Michigan City, said the pandemic was, “a big struggle, but it also brought out a lot of good and attention to the fact that it’s not healthy from a mental health perspective to not have people around, to isolate.”

According to an Indiana Family and Social Services Administration study released in April, 21.6% of Indiana residents have some form of mental illness, which is higher than the Midwestern and national averages.

Franciscan Health Michigan City has a 14-bed inpatient behavioral health unit at the Legacy Campus at 301 W. Homer St. and partners with the Swanson Center in La Porte for outpatient services. In February, Franciscan Health Michigan City announced a partnership with Signet Health to provide management and advisory services for the behavioral health program.

“We’re the only inpatient mental health facility in LaPorte County and want to take the lead on initiatives to address these needs,” Darrah said.

Darrah said the inpatient behavioral health unit embodies the spirit of the Franciscan Health mission with its focus on respect for life and compassionate concern.

“When patients are discharged, they leave here with hope, plans and support,” Darrah said.

Wichlinski said having a sense of hope is key to recovery.

“It’s not just about acknowledging that you’re struggling mentally,” she said. “It’s knowing you can bounce back from it.”