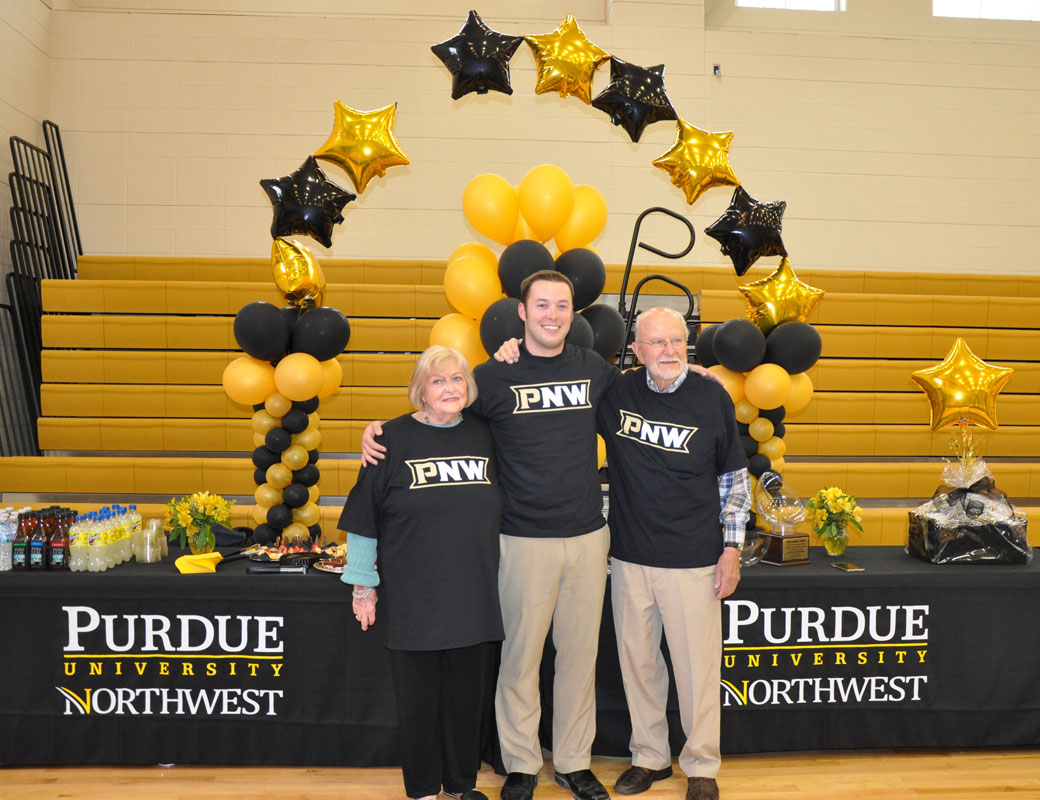 A Purdue University Northwest milestone was reached Friday afternoon (4/29) as the ceremonial first basketball shot was taken in the new H.D. Kesling Gymnasium, located in the James B. Dworkin Student Services and Activities Complex on the North Central campus.

Taking the first shot was Austen Kesling, grandson of Dr. and Mrs. Peter Kesling who made a $1 million donation to the Student Services and Activities Center building fund to secure the right to name the gymnasium for Peter’s father. Austen, great grandson of H.D., was a noted basketball player for La Porte High School from 2004 through 2007. He graduated from Purdue University in 2011 with a Bachelor’s degree in Business Management and he continues to play basketball.

Visitors to the gymnasium will be greeted with the words “H.D. Kesling Gymnasium” emblazoned on the entryway wall.

Inside the gymnasium, the Purdue University Northwest new athletic mascot, the Pride, is the focal point of center court.

Dr. Kesling explained that he was inspired to name the gymnasium for his father, H.D., who was an outstanding high school basketball player in Logansport and a member of the team that made it to the 1918 – 19 state quarterfinals. As a young student, his father realized that he needed to keep his grades up in order to maintain his spot on the basketball team. H.D. vowed to do everything he could to improve his grades to be sure that he could continue to play ball.

He soon excelled in class and in basketball. “If it wasn’t for basketball, he might have stayed down on the farm and never had the opportunity to attend college. However, he continued his excellent study habits, graduated from Loyola Dental School and in 1924 began practicing dentistry in La Porte,” said Dr. Kesling.

“This is why all of the Kesling family is proud to have his name associated with the new gymnasium. We hope that his story serves to inspire future students during their academic years.”

“I am extremely proud that the Kesling name will be a permanent part of the building and will serve as a daily reminder to our students, staff, faculty and guests of the Keslings’ support and their commitment to the university and our community,” said Purdue North Central Chancellor James B. Dworkin.

The Purdue University Board of Trustees recently named the Student Services and Activities Complex in honor of Dworkin, who will retire as chancellor on June 20. He has held that position since January, 2000.

The H.D. Kesling gymnasium will have a bleacher seating capacity for 1,361 with a total event capacity of 2,065.

The main basketball court can be divided into two separate courts through the use of a ceiling-hung divider to separate the courts. The gymnasium can accommodate additional net sports such as volleyball and badminton.

The first events to take place in the complex will be the 2015 commencement ceremonies on May 16 and 17 in the H.D. Kesling Gymnasium. A reception for the graduates will take place in the building’s Great Hall immediately following each night’s ceremony.