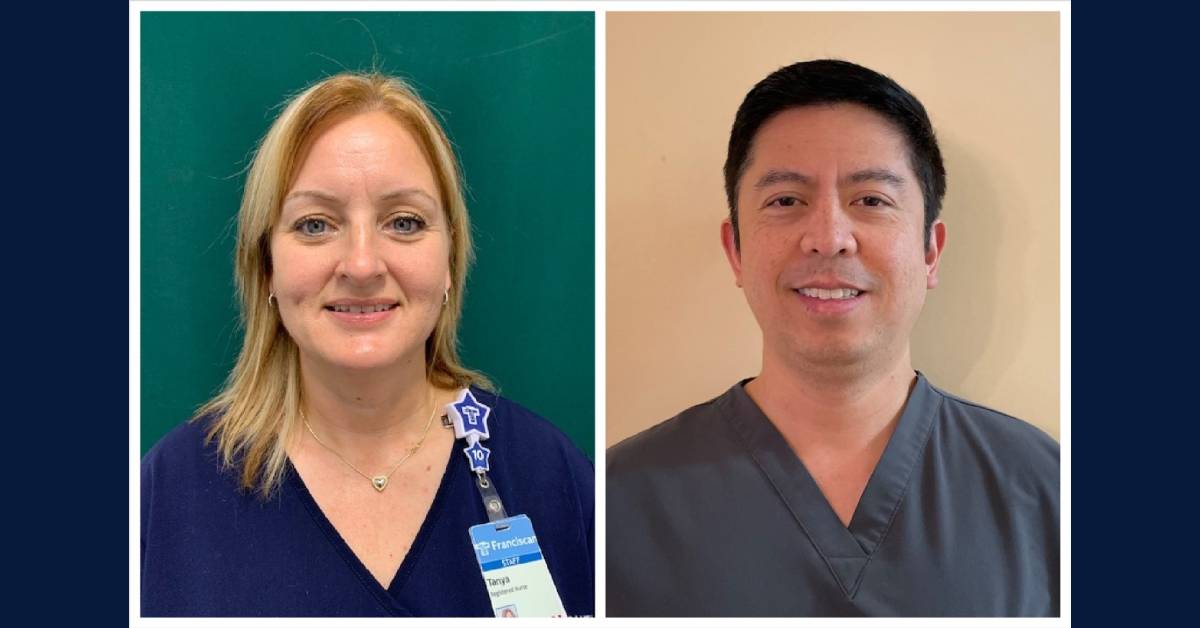 First responder may not be the main part of their job description, but two Franciscan Health home healthcare workers recently went into action when confronted by life-and-death situations.

Tanya McClatchey, RN, had arrived to care for Marilyn Torrez at her Michigan City home as Marilyn and her husband, Louis, saw their 40-year-old son, Gilbert, collapse from a medical emergency.

“I came running out of the room in a moment of desperation, and I see her pulling up,” Louis Torrez said.

“She did whatever she had to do to bring him back,” Louis Torrez said. “She knew what she was doing. She was in full control.”

He credits McClatchey’s swift action with saving Gilbert’s life. “If she hadn’t done what she had done, he wouldn’t be here, and I thank her with all my heart,” he said.

For her efforts, Tanya was awarded Franciscan Health Michigan City’s DAISY Award in October, honoring extraordinary nurses. Tanya’s nomination reads in part, “I am a firm believer that God places us where we are needed in life, and I am thankful He placed her at this home to help this person and their family.”

In a separate incident, physical therapist Tyrone Guarin became concerned when his patient Nancy Crulcich didn’t answer his phone call to let her know he was on his way for her therapy session at her home in Lowell. He decided to go to the home to make sure she was OK, and when he arrived, he could hear dogs barking, but there was still no answer.

Guarin sensed something was wrong, so he called her son, Jake Crulcich, who gave him permission to enter the home. He searched the home and found her slumped on the floor of her closet. He noticed shallow breathing, checked for a pulse, called 911 and began CPR until paramedics arrived.

Unfortunately, Nancy Crulcich passed away at age 67 after nearly three weeks in intensive care. Still, her son says he is thankful for Tyrone’s actions.

Lauren Welch-Steiber, clinical director of Franciscan Home Health for Northern Indiana and Olympia Fields, said, “As a manager, what is extraordinary about this case is that Tyrone went to the home, even though there was no answer. He sensed something was wrong and acted on his gut.”

“We regularly talk to our home healthcare staff about following their instincts, as that is a way God will lead them,” said Administrative Director of Franciscan Homecare and Hospice Ann O’Heir.

Louis Torrez says that McClatchey is much more than just a home health nurse for his wife, who is recovering from liver cancer and gallstones. She’s a ray of sunshine for his family, whose bedside manner always brightens their day.

“In my phone, I have her titled as ‘A Blessing,’ because that’s what she is to us – a blessing,” he said.