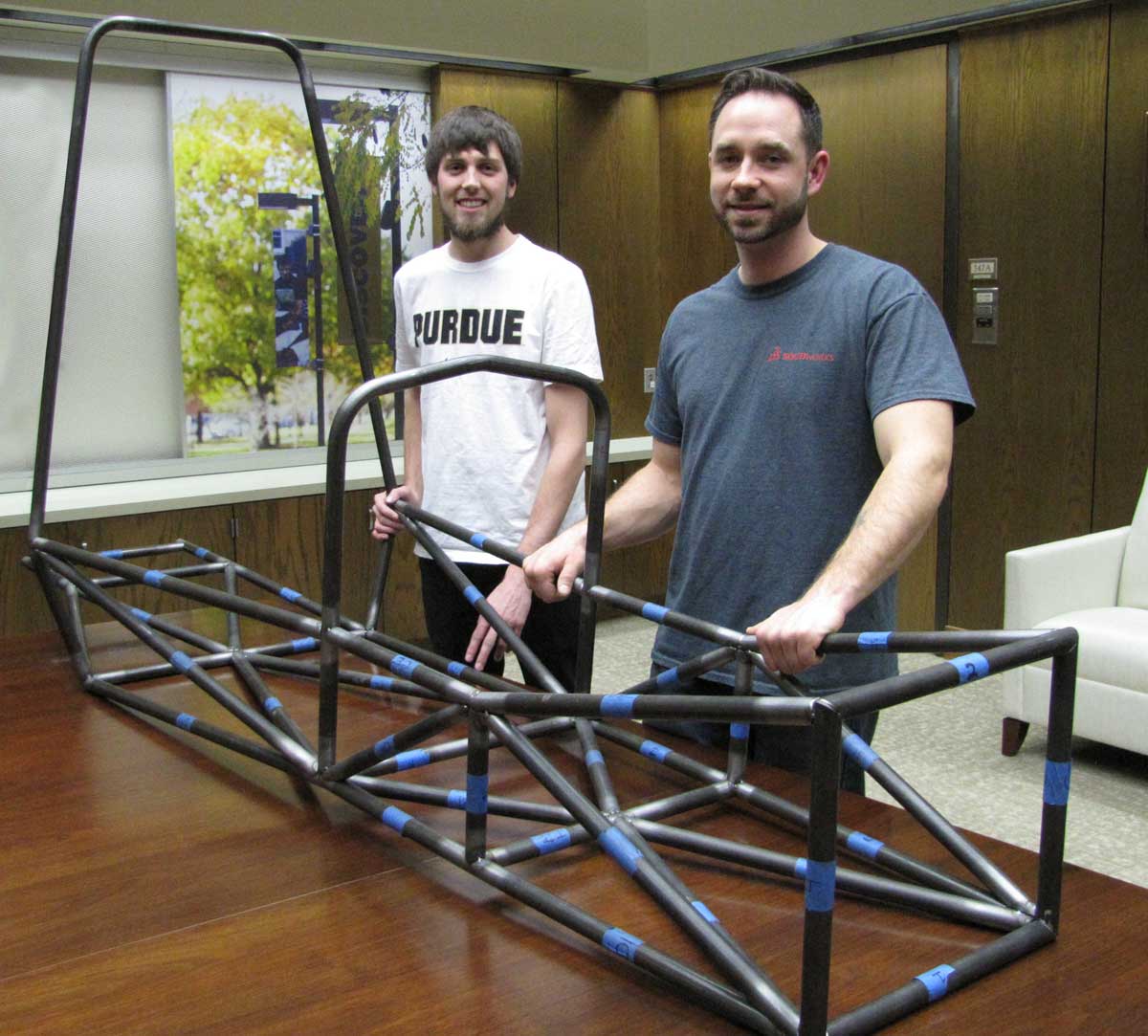 Previous Purdue University Calumet engineering students have set out to design and build an actual race car from scratch, only to come up short.

But this year, two senior mechanical engineering majors—Portage resident/Evergreen Park, Ill. native Terrence Bennett and Colten Munday of Crown Point—assisted by a team of nearly 40 other students, are well on their way to crossing the finish line, so to speak, in an effort to design, build and ultimately test the performance of their Formula One car.

Over the past year, Bennett, Munday and their team have gone the second mile and then some working as much as 60-hour weeks to produce a vehicle they have entered in a Collegiate Design Series Formula SAE international competition, May 11-14 at the Michigan International Speedway in Brooklyn. Some 120 cars designed and built by students nationally and internationally will compete in multiple static events based on design, cost and fuel efficiency, as well as dynamic events that test endurance, speed, handling and acceleration.

SAE—Society of Automotive Engineers—bills its Collegiate Design Series Formula SAE competition as “extreme engineering.” But it’s more than that.

It’s also a lot about fundraising. To build their car, Purdue Calumet team members determined they needed to raise $20,000. They have generated some $19,000 to date, thanks to enterprising persistence and resourcefulness that has tapped into the generosity of family, friends, and some two dozen sponsors and other supporters.

“Efforts in the past were limited to only a small number of students who did not have an adequate strategy for fundraising and acquiring parts and equipment,” Purdue Calumet Professor of Mechanical Engineering and project advisor Masoud Mojtahed said about the failed attempts of predecessors. “The present students have completed their design, are making the frame, rebuilding their engine and have been able to acquire necessary parts to manufacture their car. They also have paid the registration fee to enter the competition.”

A fee they now expect will be refunded to them because of community service they have performed mentoring middle school students of the Hammond Academy for Science and Technology (HAST). SAE included the cost-saving opportunity in the registration process.

Senior project for academic credit
Like Bennett, team vice president Munday is using the vast undertaking to satisfy a Purdue Calumet senior engineering design project requirement. In all, eight students are earning academic credit for the diverse, hands-on learning roles they have assumed.

The students are divided into four sub-teams of responsibility: chassis; power train; steering, suspension and brakes; and electrical.

When they complete their work this spring, they expect to have a race car, powered by a lightweight, 600 cc Honda street motorcycle engine capable of accelerating from 0 to 60 miles per hour in 2.5 seconds and producing maximum speed of 70 mph.

“We’ve had to buy pretty much everything—wheels, tires, raw materials,” Munday said. “As far as designing a race car, we applied our knowledge and figured out the rest by researching the internet. But the biggest thing I’ve learned is project management—making sure we all stay on track.”

Hired by GM
Another valuable perk of Munday’s involvement with the project has been the job he will begin with General Motors in its Chassis Dept. following his spring graduation. Ironically, he will work in the same town as the May competition will be held.

“General Motors supports the competition,” he said. “So having it on my resume when I attended a job fair was a big edge for me.”

Besides completing the building phase and raising a few more expense dollars, the biggest remaining challenge for the team is finding a venue at which to test the car before competition begins.

Bennett and Munday admit to viewing the project as a legacy for future engineering students to embrace and further. “According to the rules, only the chassis must be redesigned each year,” Munday said.

As for the bigger picture of the significance of such a project, Professor Mojtahed said, “It has provided Terrence and Colten with ample opportunities to practice leadership, advance their PR relationships and prepare them for future jobs as leaders and project managers. All the students involved are obtaining a vast amount of knowledge about how to conduct an engineering project from inception to completion.”