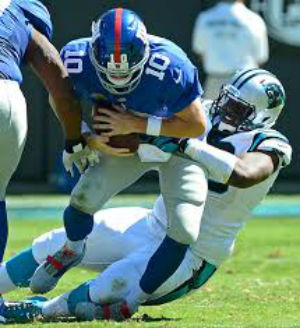 One homegrown Hoosier and a few players and coaches who called Indiana home for a period of time will be involved in Sunday’s Super Bowl 50 matchup between the Denver Broncos and the Carolina Panthers.

The only player on either team that played high school football in Indiana is Kawann Short, a starting defensive tackle for the Carolina Panthers. Short is a 2008 graduate of East Chicago Central High School, where he was a two‐sport athlete in both football and basketball. Short was a starting center for the Cardinals’ 2007 Class 4A state championship basketball team where he teamed with E’Twaun Moore, now with the Chicago Bulls, to beat North Central (Indianapolis), 87‐83. Watch that game here.

Like Moore, Short chose to play his collegiate years at Purdue University (2008‐12). Short was drafted by the Panthers in the second round of the 2013 NFL Draft with the 44th selection overall and has been an impactful player in his brief time in the NFL. Short was praised for his work this year, as he was selected to his first Pro Bowl (did not play due to the Super Bowl). He also became the first player in NFL history to win NFC Defensive Player of the Month twice in the same season. His 11 regular‐season sacks were tied for the most by a tackle this year.

Trai Essex was star of Harding’s 2001 2A state championship basketball team (24 points, 14 rebounds, game‐sealing FTs with 7.3 seconds left) and was a member of the Pittsburgh Steelers’ 2005 and 2008 Super Bowl champion teams, but didn’t play in either Super Bowl game.

One player for the Denver Broncos called Indianapolis his home for almost 15 years. That player, of course, is Peyton Manning, who is making his fourth appearance in the Super Bowl in his career, and his second as a Bronco. Manning is attempting to become the first quarterback to start and win a Super Bowl with two different teams. Manning is also the only quarterback to start four Super Bowls with four different head coaches.

Seven other players and five coaches between the two teams also have ties to the state.

Special thanks to IHSAA Sports Administration intern Mitch Huppert, a Sport Management major at the University of Indianapolis and Bremen High School graduate, for compiling the information above from each team’s official website.