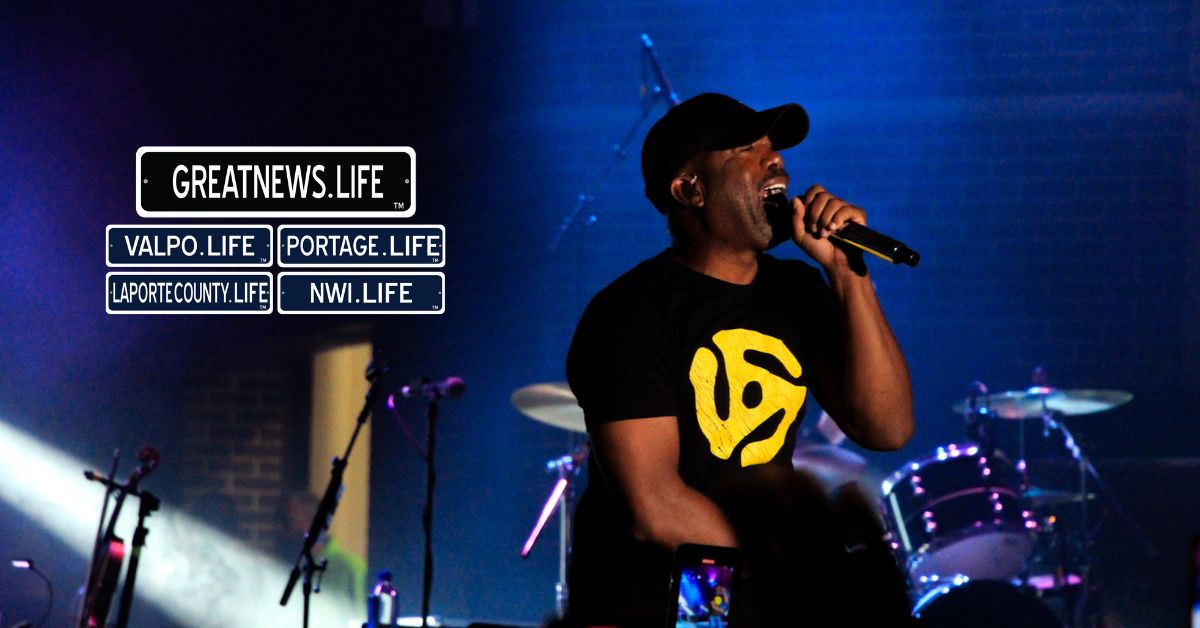 Darius Rucker kicked off the first night of the City of Hammond Festival of the Lakes with a bang. This festival brings in people from all over the Chicagoland area to Hammond to enjoy food, carnival rides and games, and most of all: live music.

The festival is held at Wolf Lake Memorial Park across the span of five days, beginning on July 13. Darius Rucker was the headliner for the opening night, but the rest of the festival features headlining artists including Counting Crows, Lynyrd Skynyrd, and Rick Ross.

Attendee Dwayne Edmondson was born and raised in Hammond and now lives in Crown Point and this year was his first time attending the Festival of the Lakes. He spoke highly of what Mayor McDermott is doing for the City of Hammond as well as what he is doing for the Hammond community.

“I live in Crown Point now, but I love what the mayor and the people in Hammond did for Hammond. This is my first time here; this park is absolutely amazing. I love it,” Edmondson said.

The Park was buzzing with energy as people filed in to get ready for the main performance. Attendee Kristy Shaw was having an amazing time joking and laughing with her friends and family while waiting for Darius Rucker to take the stage. She too spoke highly of the mayor.

“Mayor McDermott puts on a great show for the City of Hammond,” Shaw said.

Edmondson was drawn to the Festival of the Lakes due to the opening night performer as well as the location being in his hometown. He has seen Darius Rucker live before but being able to see one of his favorite country performers play in his hometown was unmatched.

“Darius Rucker is one of the best country performers I've ever witnessed. I've been to Tinley Park Convention Center. I've seen them there two times. And I come to support him here today,” Edmondson said.

The atmosphere of the event was described by attendee Kristy Shaw as both beautiful and exciting. People could be seen across the park smiling, laughing, and having a good time with their friends and family as they enjoyed the live music.

“Being here in the environment and enjoying the drinks and the people and music feels good,” Edmondson said. “Everybody's happy. Everybody's positive. Everybody's here to have a good time, and we're here ready to yee-haw.”

To kick off the third day Apollo Selene opened playing some amazing hits from the classic rock era such as All Along the Watchtower by Jimi Hendrix, Free Fallin’ by Tom Petty, and more! They were followed by the Highway Band which featured blues music using a tambourine and some very cool harmonica solos.

Rain or shine the people of Northwest Indiana came out to have a great time and see the incredible Lynyrd Skynyrd. You could see everyone smiling and laughing with their friends for miles. The atmosphere was electric the whole night.

“This is a time where everyone gets together,” said Aileen Ibarra, special events coordinator for Hammond Parks. “I know personally that some families travel [to Hammond] specifically for this festival, and it's something that they look forward to every summer. Even people who have grown up in Northwest Indiana or Hammond come back specifically just for the festival, and to be together with family and it's a memorable experience for them.”

Mayor McDermott was seen addressing the crowd to introduce Lynyrd Skynyrd. The theme of this concert that he touched on was peace and love which was accomplished. He did a fantastic job getting the crowd on their feet. He and a few others on stage also tossed a bunch of shirts into the crowd so don’t miss your chance to get yours these next few days!

One attendee born and raised in Hammond talked about how much the city has changed since he was a kid.

“It’s crazy that this same place is where I used to run around, play in the mud, and try to find turtles when I was a kid. Now I’m about to see one of my favorite bands here!”

Lynyrd Skynyrd played a lot of their classics such as Gimme Three Steps, Simple Man, Sweet Home Alabama, and of course, they ended with one of the most iconic songs in the history of rock, Free Bird.

The Festival of the Lakes will continue throughout the week with artists including Rick Ross with the Lox, and Los Originales de San Juan with Condigo FN.