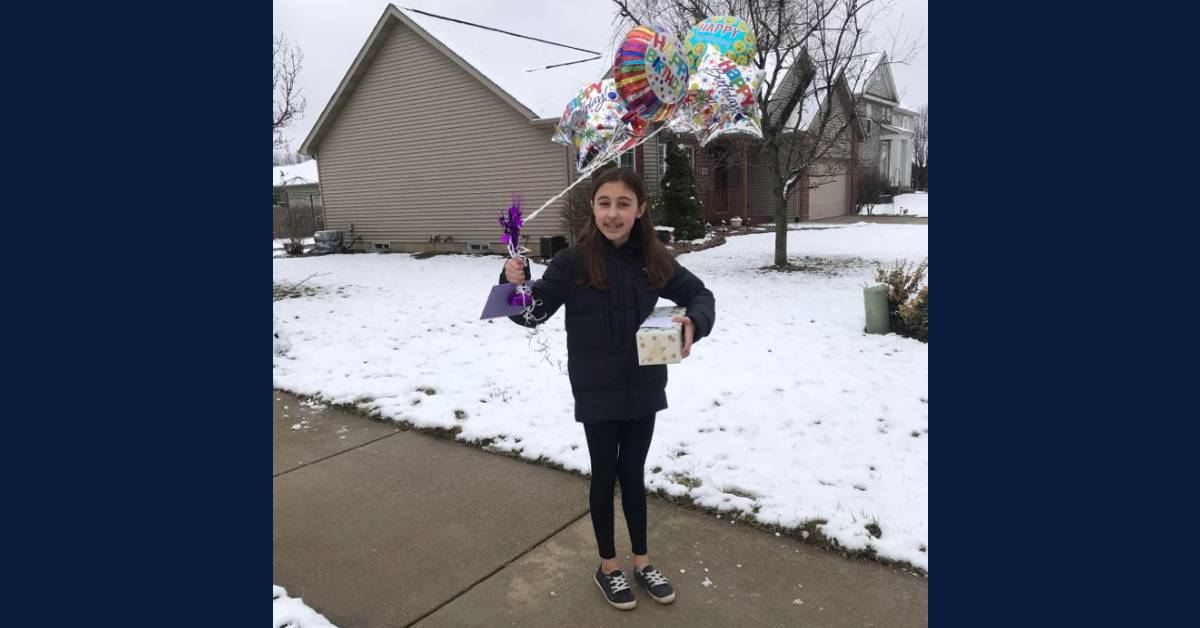 Peyton Ostertag isn’t likely to ever forget her 12th birthday.

With the coronavirus pandemic causing schools to shut their doors and rely on e-learning, people to self-quarantine and social distance from one another, and everyone to generally press pause on their typical routines, the Liberty Intermediate student had resigned herself to a quiet birthday celebration with immediate family this year. So imagine her surprise when, on March 23, her birthday morning, she stepped outside to see 19 vehicles driving past her home for her very own birthday parade.

Family members, friends, and neighbors all cruised down her street, honking their horns and calling out birthday greetings to Peyton. Some of them attached balloons to their cars or handed them to Peyton in a quick exchange. Others touted handmade signs wishing her a happy birthday.

Peyton was so surprised, she found herself a little speechless at the spectacle in her honor.

“At first, all I saw was just like this big truck, so I didn’t know what that was about,” she said. “And then I saw all these cars driving after it. I was very confused,” she laughed.

When she realized the line of cars were filled with loved ones celebrating her, she became overwhelmed with excitement.

“It was surprising!” she said.

Peyton’s mom, Missy, said she and her husband were just as surprised as Peyton.

“It was the most wonderful surprise, we had no idea,” she said.

Missy credited the entire stunt to her sister Maggie Bedroya Quick. The big garbage disposal truck leading the lineup was operated by Quick’s brother-in-law, and Quick was in the car following. Behind her was the family’s youth pastor, friends from church, Missy and Quick’s father, cousins, and Peyton’s team members from the Duneland Swim Club, whom she was especially thrilled were part of the surprise.

“We just got so emotional,” Missy said, her voice cracking even as she spoke. “It was truly everybody we love.”

Missy said one of her cousins in the lineup is a family physician in Valparaiso, and that she hadn’t had a day off from her office in nearly a month. She shared a car with her sister, who manages the office, and the women just lost their father unexpectedly last month. Other family members and friends in the parade with similarly heavy circumstances set them aside for one uplifting occasion.

“These people with a lot going on in their lives, they all came out to support my daughter,” Missy said. “It was so sweet and moving to me, especially as Peyton’s mother. Of course, you love when people love on your children, it just makes you feel good. But to see everyone who has so much going on take the time to make a poster board or bring balloons, take the time to come by our house, it was incredible.”

The Ostertags were supposed to be on vacation in Florida this week but had to cancel their trip due to the pandemic.

“That’s probably been the hardest thing, not being in Florida for her birthday like we were supposed to, but Peyton handled it like a champ,” Missy said.

Peyton has two little sisters, Audrey, who is 8, and Nora, who is 4 and just a little more bummed about the trip being canceled than her sisters. But Peyton is helping to distract her from her disappointment.

“Peyton’s been an excellent big sister. She helps her sisters. On Sunday, we didn’t have church, so she took her sisters upstairs and said, ‘let’s have Sunday School,’” Missy said. “I’m a lucky mom to have three little girls who get along so well.”

The reaction Peyton had to the parade was thrilling for her family to see.

“Right before [the parade], when I didn’t know any of this was happening, I had just made a Facebook post about Peyton for her birthday. I described how she’s very quiet, and people always assume she’s shy, but she’s just a very quiet, calm spirit. My sister and I are very outgoing, and she’s always just very quiet and takes things in stride around us,” Missy said. “That smile you can see her give at the end of the video is the epitome of Peyton’s happiness. When all those kids are calling for her and being loud and she’s just quietly waving back. It was just cute to see.”

Peyton has been swimming since she was 5, and said it’s her favorite activity. Missy has since shared the video of the birthday parade with a couple of groups on Facebook, and the resounding response that people share is one of inspiration.

“A couple of people mentioned when they shared it themselves, that it takes a village. And that’s one of my favorite sayings. This is just an example of people living that phrase, and showing up for love,” Missy said. “We don’t have a tragic story to tell or anything, but we have some amazing people in our lives who wanted to show up for love and to make a little girl’s birthday special.”

“I think it’s an incredible example of humanity, and I hope this is fuel for people to show up for everyone in their lives in the days to come,” Missy said.