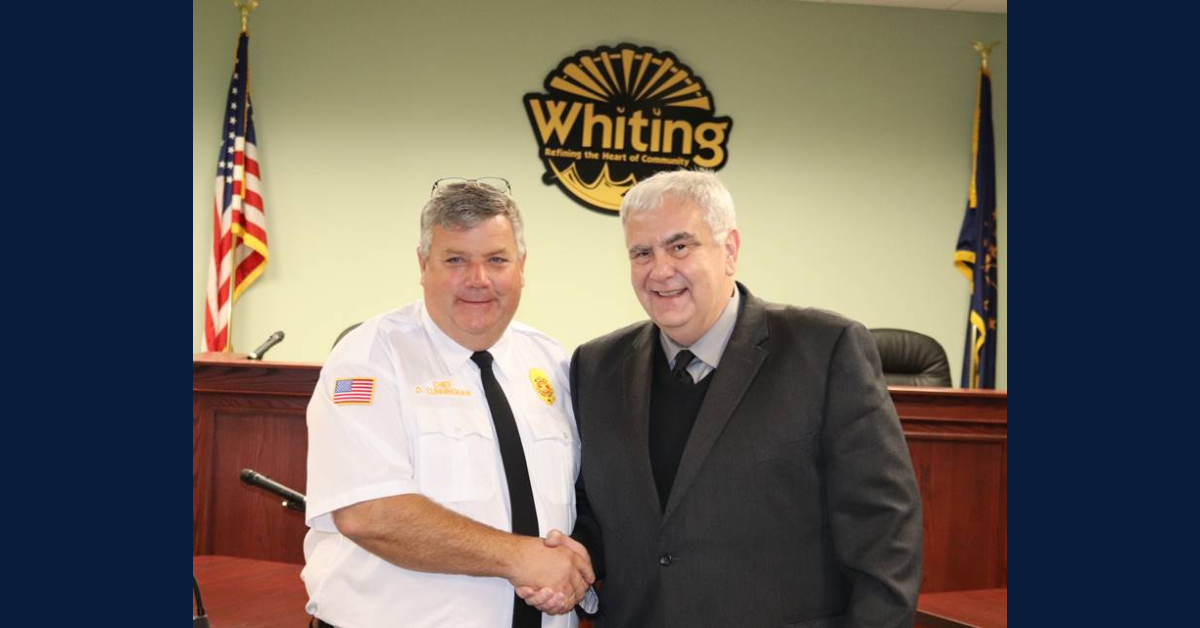 Dave Cunningham was officially sworn in as Fire Chief on the morning of October 20, 2020

Mayor Steve Spebar and the City of Whiting are excited to introduce new Whiting Fire Department (WFD) Fire Chief, Dave Cunningham.  Chief Cunningham was officially sworn into his new position this morning, October 20th, preceding the City’s Board of Public Works Meeting at Whiting City Hall.  He was joined and congratulated by City Department Heads, family, and close friends.

Fire Chief Cunningham is a lifelong resident of Whiting who graduated from Clark High School in 1982.  He continued his education at Worsham College of Mortuary Science where he earned his Mortuary Science degree.  Cunningham has been a licensed Funeral Director in the State of Indiana since 1988.  In addition, he began his longtime career with the Whiting Fire Department in March of 1991 as a Probationary Firefighter.  Since then, Cunningham has climbed the rankings from Engineer, to Lieutenant, to Captain for eight consecutive years.  He has been married to his beloved wife, Paula Cunningham for 29 years.  They are the proud parents of Thomas Cunningham who is 19 years of age and attending Holy Cross College at Notre Dame.  He’s currently studying Business and is a member of the Notre Dame Men’s Rugby Team.

“I’m looking forward to serving as Chief of the Whiting Fire Department,” says Cunningham. “We have a talented team of both new and experienced Firefighters who are proud to serve the community and keep our residents safe.”

Congratulations, Fire Chief Cunningham!  We wish you the best in your new duties.