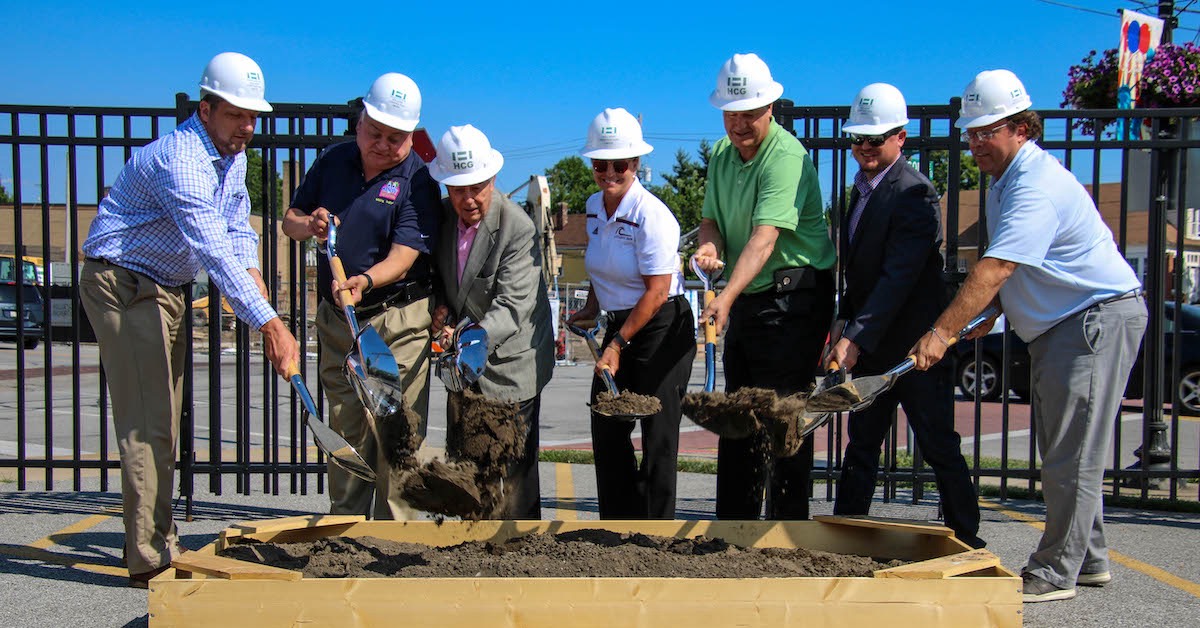 A cool Lake Michigan breeze graced the crowd gathered around a ceremonial and much-anticipated bed of dirt in the southeast corner of St. John the Baptist Catholic Church.

As the focal point of Monday afternoon’s Groundbreaking Ceremony for The Illiana mixed-use development in the City of Whiting, the dirt represented the ground where the former Illiana Hotel once stood, kitty-corner from the event at 119th Street and Atchison Avenue.

"It's exciting to be here today,” said Mike Micka, Vice President of Development for Holladay Properties. “This project has been a long time in the making, and it’s gratifying to see it under construction and on track for occupancy in Spring of 2020.”

The new five-story, mixed-use building is the result of a partnership between commercial real estate developer Holladay Properties, the City of Whiting and Mayor Joe Stahura, and the nearby Calumet College of Saint Joseph (CCSJ).

"It's been great to work with a talented team,” said A.J. Monroe, Vice President of Planning and Development at Holladay Properties. “It's really fun to work on urban infill projects, where you're bringing in a vibrant scene into a really strong neighborhood."

Twelve of the development’s 32 two-bedroom, two-bathroom living spaces will be master-leased to CCSJ, explained Monroe.

"The Illiana will be the first college-endorsed student housing offering,” Monroe said. “We know how much this means to the college, we are honored to have played a part."

In her welcoming remarks, CCSJ President Dr. Amy McCormack echoed Monroe’s sentiment. "This is a real milestone for the college because it is our foray into residence halls," McCormack said. "I'm grateful to be here today and to be part of this partnership."

Stahura also lauded the team who worked together to bring the project to fruition and looked forward to future endeavors. "It's really the start of our new development projects across the city," Stahura said. "Holladay's been fantastic to work with. We hope to do a lot more projects with them."

The mayor was very enthusiastic about Monday’s ceremony and what it represented for the City of Whiting. “To be able to see something start after working so long on it, it's really a great feeling,” he said. “It's a lot of satisfaction."

In addition to the living units, the new building will have about 4,000 square feet of commercial space on the ground floor. To support both businesses and residents, the plan includes eight partially-enclosed parking spaces in the back of the property and 16 surface parking spaces between the building and the bank behind it.

Exactly which businesses will fill the first floor spaces have yet to be determined, according to Stahura, though conversations have started with potential lessees. “We have a couple really good prospects that we're working on right now," Stahura said.

After the opening remarks, stakeholders donned construction helmets, ceremoniously dug their shovels into the dirt, and grinned. A.J. Monroe summed up the event’s atmosphere best. "We're celebrating an exciting start in the City of Whiting," he said.

For more information about the Illiana Building project or other current Holladay Properties developments, visit www.holladayproperties.com.