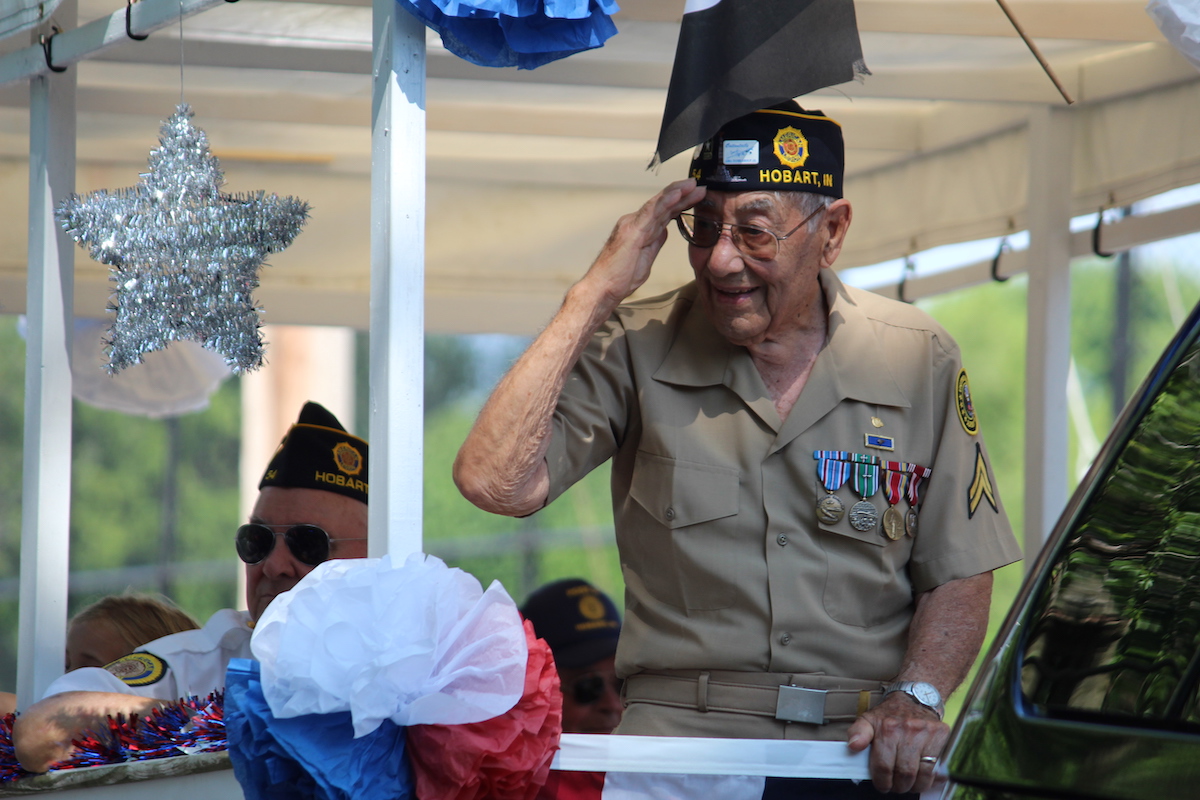 The City of Hobart transformed into a sea of red, white, and blue on Thursday morning for their annual Fourth of July Parade. Excitement started Monday, when some families set out blankets, chairs, and tents to reserve that perfect spot along the parade route. Hobart has a rich history of celebrating the nation’s birthday, but there was a change this year. The normal route was changed due to construction and instead began at Hobart Middle School.

“We have a certain spot we go to see the parade every year, so I was bummed at first that the route changed, but we have a new spot here in my friend’s yard,” Angela Burns, Hobart resident said. “So far so good, and it’s nice because this new route is spread out.”

Burns and her daughter, Catie, anticipated seeing friends and family in the parade. The Fourth of July is one of their favorite holidays, because of the feelings of community, friendship, and patriotism. She loves how people set out their chairs days in advance and no one steals them. For Burns, this reflects the excitement and honesty of her neighbors.

“Most people in Hobart are patriotic, you’ll see them stand and clap when Vets pass,” Burns said. “We are true patriots, here, and enjoy celebrating freedom.”

Nikki Lopez, Special Events Coordinator for the City of Hobart’s Parks Department, said that Hobart reminds her of Mayberry. Many people graduate high school and stay to raise families alongside their classmates and families. In fact, some people that move across the country, will return to Hobart for the star-spangled holiday.

“It all boils down to a sense of pride about our community,” Lopez said.

Lopez and her team at the Parks Department have a lot to prepare while planning for the city’s treasured holiday. She explained that there would be a lot of old-fashioned floats because they encourage the creativity and flare. Later in the evening before the fireworks, winners of the float contest would be recognized and awarded large trophies for their efforts. Lopez looked forward to the fireworks display this year because Mayor Brian Snedecor arranged for a larger show. Lopez acknowledged that the city’s Mayor is patriotic and that his enthusiasm trickles down from his leadership.

“Hobart has a rich heritage of honoring our veterans and supporting the military,” Mayor Snedecor said. “Whenever we have an opportunity to say ‘thank you’ to those who have served, we do. We want to celebrate them for their commitment to our country and for their service.”

For Snedecor, the parade in Hobart is about the community coming together and seeing old friends and family members. It is an opportunity to celebrate our country, starting from the morning parade and ending with a colorful display of fireworks.

“The fireworks in the evening gives people a chance to enjoy a festive night with their families and lighting our skies. We love the Fourth of July here,” said Snedecor.