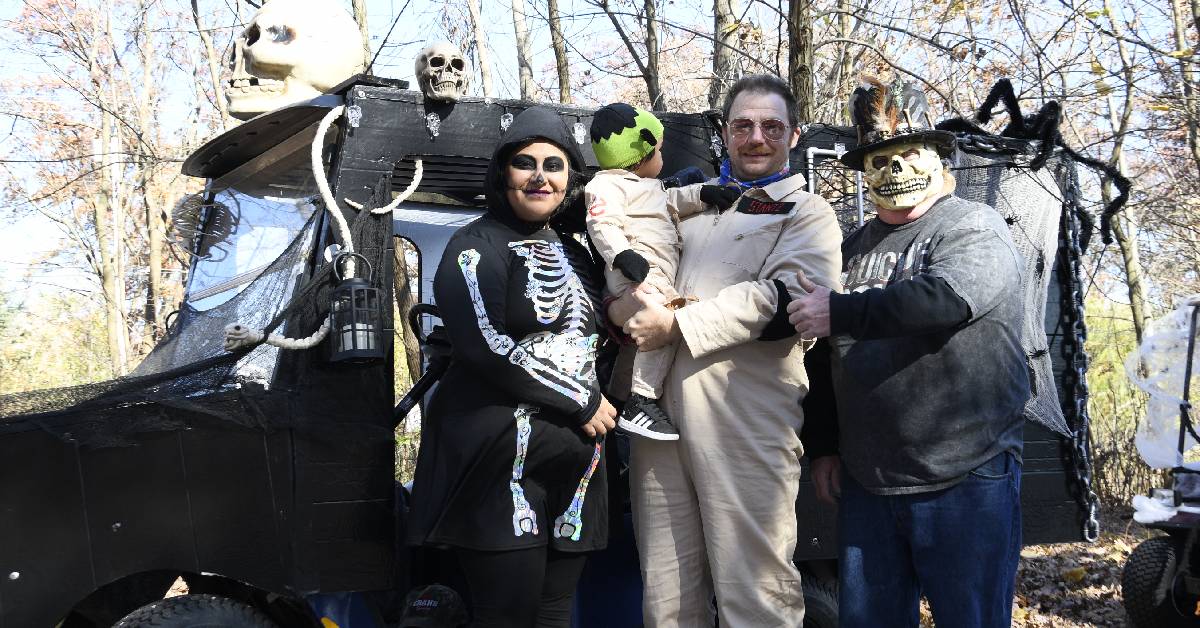 It was a spooky fun time as the City of Hobart held its first Halloween Golf Cart Parade. Kicking off Halloween festivities, approximately 150 decorated golf carts were led by the Hobart Police Department and hearses from the Northwest Indiana Hearse Club.

“I have to give all credit to Nikki Lopez, our events coordinator working in conjunction with the Parks Department’s Kelly Goodpaster,“ said Hobart’s Mayor Brian Snedecor. “In the past couple years we have had events in the summer time with golf carts. This year we had a 4th of July Parade with the golf carts. It has just continued to grow in excitement.”

Mayor Snedecor was there in costume with a bride and groom themed golf cart. He was excited the community could safely come together.

“It’s been a tough year on everybody with the virus. Not just adults but the kids, too,” said Mayor Snedecor. “Having an opportunity to do something like this, while we social distance and use commercially wrapped candy sends a message that we are a community that embraces our families and our children.”

“We typically do a Pumpkin in the Park event but with COVID-19 we couldn’t this year. This gives people the opportunity to spread out around town to watch the parade,” said Nikki Lopez, Director of Events for Hobart Events. “We are a golf cart community here in Hobart so it seemed like the natural thing to do.”

Emily Fedorif of Hobart Events heard Lopez needed additional people to judge the parade, Fedorif knew her best friends, Erin Swafford and Jessica Evans, would jump on the opportunity. The three donned costumes of the Sanderson Sisters from the movie Hocus Pocus for the special occasion. Many in attendance were excited to see the judges, with several posing for pictures with the sisters.

Markos and Reyna Alvarez heard of the event through social media and couldn’t pass up the opportunity to deck out their cart and go for gold.

“We signed up to have fun and show creativity in the community,” said Reyna. “We had seen they had done one like this for the 4th of July, so we decided to join this one.”

Bev Mehok and his family joined the parade for fun with their spider themed cart.

“We didn’t know if there was going to be trick-or-treating this year so it seemed like a nice, fun thing to do,” said Mehok. “I think it’s a great thing.”

Covered in zombie makeup, the Austin family were inspired by the TV series The Walking Dead, while Wayne Whittle went with a Bone Collector theme. He had worked on his golf cart for four days.

“I came up with the idea after looking around my garage and seeing what I had to work with,” said Whittle.

John Wood and family drove a golf cart based off the movie Jigsaw. He and his family wore costumes from the movie as well, an idea that came easy to them.

“Jem Concrete is a concrete cutting company I work for. My boss sponsored us and we came up with this theme because of the concrete blades,” said Wood.

The carts lined up in Paverse Park then headed east on 3rd St. to Main St. From Main, they traveled on 8th, through Wisconsin and back to Paverse. Young and young-at-heart lined the streets wearing costumes as they dashed out into the street to collect the candy tossed from the carts.

When it was over, the Sanderson Sisters went to work picking their three favorite Halloween golf carts in the categories of  scariest, most creative, and best overall. Selections will be posted to Facebook and allowing the residents of Hobart to pick the winner. Winners will receive a $100 gift card selected by Like votes. To cast your vote visit the City of Hobart’s Events Facebook page at https://www.facebook.com/hobartevents.