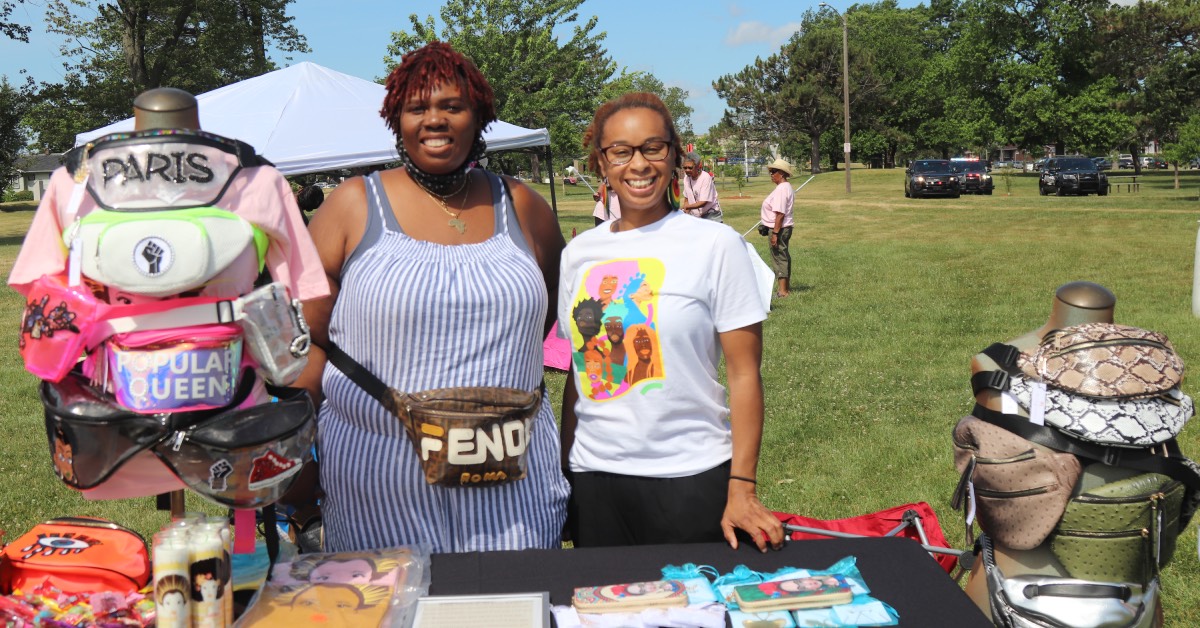 Juneteenth is a historically black holiday that celebrates the day the last slaves in the deep South were informed that they were free. On June 19, Americans gather to celebrate this holiday that recently became the nation’s eleventh federal holiday.

City of Hammond’s Juneteenth Celebration took place in Doctor Martin Luther King Jr. Park. The grass was taken up by vendors’ tents and people walking in the gaps to explore the food and articles they could find. On the stage was a podium at which Hammond’s civil servants and community members spoke.

The main goals of this event were to educate and celebrate the history and culture surrounding Juneteenth while supporting the community.

“Even after the Emancipation Proclamation was signed in January of 1963, it was two years before word got down to Texas,” said Reverend Homer Cobb, president of the Hammond NAACP. “That’s not to say that the slave owners didn’t know. Juneteenth was the nineteenth of June when it came to the knowledge of those in Texas that they were free individuals.”

On June 19, 1865, union soldiers entered Galveston, Texas and read the news of the Emancipation Proclamation to those who were enslaved.

“It was almost as if an awakening had taken place,” Reverend Cobb said. “And they said, ‘You mean that if I walk down that road right there, that I can keep on going and no one’s going to bring me back?’ And I am quite sure that as they left, they kept looking back to see if there would be anyone that would bring him back.”

“Every Fourth of July weekend we celebrate those who revolted, fought, and died for the independence of the 13 American colonies from English oppression,” said Hammond Councilman Barry Tyler Jr. “And while that’s a great thing to celebrate, at that point in history, somewhere around 37,000 black men, women, and children were enslaved in this country. They had just watched folks fight for their freedom while being denied their own.”

“Growing up I learned more about Juneteenth from my parents than I did from my school teachers,” Councilman Tyler continued. “That’s why it doesn’t surprise me that we have dozens of people that are just now learning the significance of this day.”

Mayor Thomas McDermott Jr. echoed a similar memory, but his parents did not educate him about Juneteenth.

“My friends will say, ‘Mayor, the history you read is not necessarily the history of our ancestors.’ I get it now,” said Mayor McDermott. “It’s embarrassing, I’m 52 years old and I’m reading stuff that happened a century ago for the first time.”

At the event, Carlotta Blake-King, school board trustee, read the history of Juneteenth and was proud to see her past students in the audience. She remarked that she always likes to take any moment and make it a teaching moment.

Continuing on its educational path, the Juneteenth gathering honored five high school graduates as well. Only four students were able to attend the event, but all five received scholarships for their excellence in education.

The event was not entirely a teaching moment, it was also a bustling celebration. Attendees wore Juneteenth t-shirts, often with green, yellow, red, and orange text commemorating the day in 1865.

Reverend Cheryl Frith Brown performed a dance to the song “Stand Up.” During the bridge of the song, the crowd rose with Frith Brown and began to clap in unison to the song. The crowd felt the power of the music through Frith Brown throughout her performance by singing along or swaying to the music.

The celebration took the opportunity to provide ways to improve the community. The main two were through political action, such as something as simple as voting, and supporting small businesses and restaurants.

“Voting is very important because of the many people that have died in their efforts to vote,” said Reverend Cobb. “In 1920, Julius Perry in Ocoee Florida is an example. We vote because of what happened to him and many others when he attempted to get the right to vote. We look at the thirteenth, the fourteenth, and the fifteenth amendments and they gave us the opportunity to vote.”

Reverend Cobb was also passionate about the Tulsa Race Massacre, also known as Black Wall Street. He and Mayor McDermott both touched on the idea that without knowing about these events, people are destined to repeat them. Voting is the easiest way to keep the worst parts of history from repeating.

“It’s all about empowerment and feeling beautiful,” Niehla Ollie, owner of The Curvy Situation, said. “African-American women are number one in entrepreneurship in this country, which is amazing. As a black woman, I feel it’s important to me to give people in my community the option to stay in their community to buy things. It gives you the option to buy something you won’t see anywhere else and it also supports someone else in your community.”

“We do cater to curvier women, but curvy of all sizes,” Ollie continued. “We do something four times a year called the Cute and Curvy Baddie Box. The first one I did sold out which was fabulous.”

Supporting businesses like Ollie’s and other black businesses helps entrepreneurs and those who are trying to better themselves. Just like the business owners of Black Wall Street.

“Juneteenth is considered the true independence day for African-Americans across the United States,” said Mayor McDermott. “It is important to observe Juneteenth now more than ever before, as such the City of Hammond stands in solidarity with our African-American community and will close Hammond City Hall in observance of Juneteenth. And therefore, I, Thomas M. McDermott Jr., Mayor of Hammond Indiana, hereby proclaim June 19, 2021 as Juneteenth Day in the City of Hammond and I urge all citizens to celebrate with reflections of the past.”

For years to come, Juneteenth will be celebrated in Hammond’s MLK Park in order to remember the day in which all Americans were truly free.