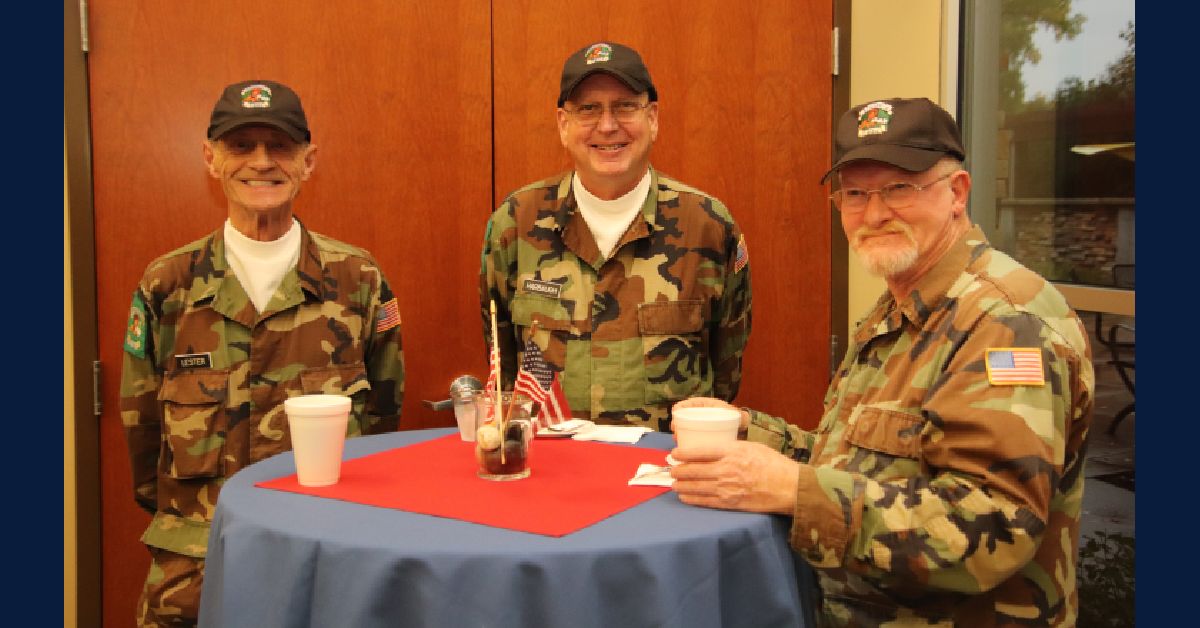 “One of the reasons we have a Veterans Memorial is because about 25% of the patients we care for at Center for Hospice Care are veterans,” Taelman said. “We’re very grateful for the vision of the Hiler family who saw that it would be a great way to honor veterans in the region.”

During the tribute ceremony, guests gathered for the presentation of the colors, followed by the Pledge of Allegiance, done by Miller’s Vets Color Guard, which served as the opening to the ceremony.

Sarah Youngs, community relations and engagement liaison, noted that she hopes this event will impact those in the community.

“I hope that everybody takes home a piece of the legacy that these veterans left,” Youngs said. “I hope that people hear the stories that are told tonight and they can talk with each other, whether they’re veterans or civilians, and hold that close to their hearts.”

Cyndy Searfoss, director of education and collaborative partnerships, mentioned that this event serves to recognize veterans.

“These men and women have served us honorably, some of them with their lives,” Searfoss said. “Many veterans, particularly Vietnam veterans, did not receive the type of recognition they deserved when they came back.”

“After high school, I spent a month in Europe. We were given a talk before we left as a group that their laws are different from ours and we should abide by the customs and the laws in the country that we were in,” Tropp said. “I think sometimes we take our freedoms for granted.”

Tropp is a United States Army Veteran of 30 years. It was through her time and dedication in the army that she learned just how much she loves and appreciates the country she lives in.

“I realized how lucky I am to live in the United States of America,” Tropp said. “I will never take the freedoms and privileges we have for granted again.”

Tropp expressed that her goal is to make the community better and ultimately impact people to do the same.

“I wanted to inspire somebody; Anyone listening to be involved in their community,” Tropp said. “Help your community, whether it be picking up trash on the road, or helping your neighbor.”

When the ceremony came to a close, Miller’s Vets retired the colors and the guests were invited to have food and refreshments at the reception.

Taelman conveyed his appreciation to everyone who played a part in making this event possible.

“We are thankful for all that have supported us,” Taelman said. “All that shared the vision and established the Veterans Memorial and all who help us care for veterans. We are very grateful to have the opportunity to honor the veterans and commemorate what they have done for our country.”

For more information about Center for Hospice Care, visit cfhcare.org.