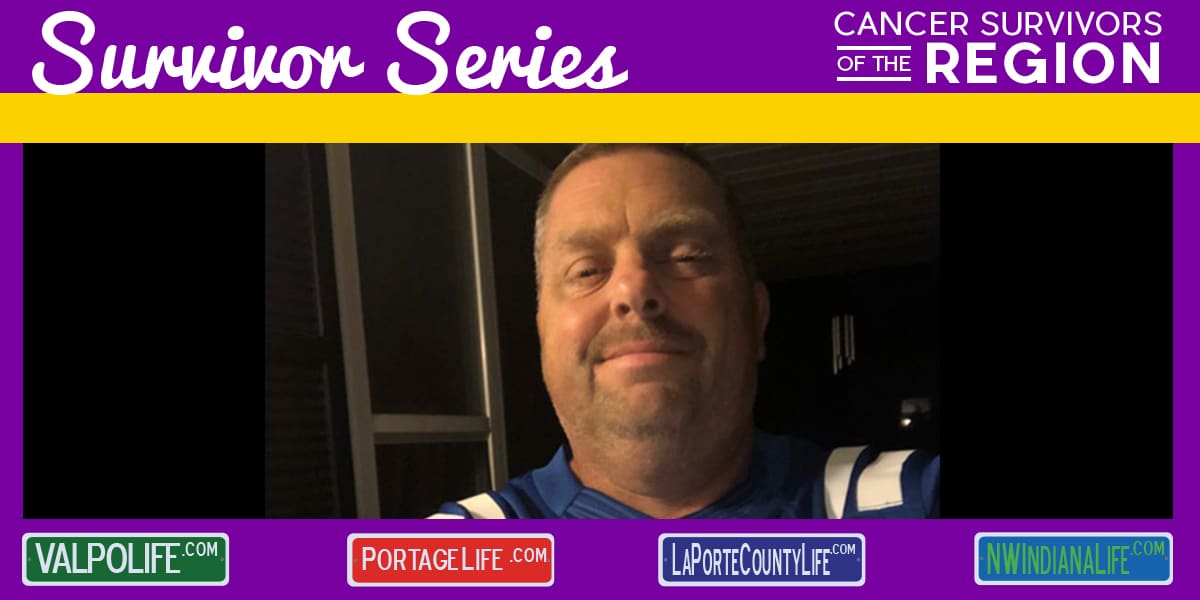 That was the through-line of Jeff Winstead’s conversation detailing his journey with Non-Hodgkin’s Lymphoma. Amidst a whirlwind of treatments, symptoms, and emotional ups and downs, that has remained his mantra since his diagnosis in February.

Back in January, Winstead woke up one morning and felt a small lump in his groin area.

“I let it go for about a month because us guys, we act pretty strong, you know, we act like ‘Oh yeah, we don’t care about that stuff, it’s probably nothing,’” Winstead said. “Then I just noticed through the month, things just started to get more uncomfortable and it grew bigger. By the end of January, it got really uncomfortable, and I knew I had to do something.”

Winstead went to the Emergency Room at St. Mary Medical Center in his hometown of Hobart. After some testing, doctors were unable to determine what the lump was and referred him to an oncologist. The oncologist determined that the lump was a tumor; he diagnosed Winstead with aggressive Non-Hodgkin’s Lymphoma.

The next course of action was chemotherapy. Winstead did three rounds of chemo before doctors realized it was not working. He was referred to an oncologist at Rush University in Chicago, where he underwent an aggressive form of chemo twice with the same disappointing results. 11 rounds of radiation only kept the tumor from growing out of control.

“Every time, it would make the tumor go down, but it would always come right back; none it was working. So that was getting to be the scary part,” Winstead said.

Doctors suggested a STEM cell transplant, but Winstead and his wife, Lisa, were undecided on the procedure. With only a 25% success rate, the extensive treatment seemed too little of a guarantee to risk.

Randomly, or by providence, Winstead happened upon a magazine article covering CAR T-cell therapy, or Yescarta, a gene-altering treatment for cancer that was just approved by the Food & Drug Administration in the US last October. The treatment involves isolating the white blood cells (the T cells) from the rest of the blood stream and genetically modifying them to treat the cancer like they would an invasive pathogen, like a virus or bacteria.

“They genetically retrain them to become a fighting army against cancer,” Winstead said.

Winstead and his wife did some further investigating and approached their doctor at Rush about it; he referred them to a doctor at the University of Chicago who could do the procedure.

“The thing with this treatment is, you have to meet certain qualifications. It’s only approved for certain types of leukemia in kids up to the age of 23, or adults that have failed two lines of treatment and that have Non-Hodgkins Lymphoma,” Winstead said. “That’s me.”

At the time of our conversation, Winstead had already received the first part of the treatment two weeks prior. On September 17, he will go back to the hospital to receive his new army of cancer-fighting T-cells.

“September 17 is called Day Zero. It’s like a rebirth, since what they’re doing is pretty much genetically changing my white blood cells. There’s a chance that it won’t work. But there’s a 52% success rate, a lot better than a stem cell transplant.”

Winstead is optimistic and energized about the procedure. His doctor at University of Chicago even had a hand in researching this treatment.

“I know I’m in good hands,” Winstead said. “We’re not just going for remission, we’re going for a cure.”

Part of the reason Winstead has such a positive outlook stems from the incredible support he receives from his family and friends.

“That’s what keeps me going. Every day I wake up and I’m so inspired by all my friends and family rooting me on; it’s like a baseball game, you know?” Winstead said. “I mean, they root me on every single day and that’s wonderful.”

Winstead admitted to moments where he felt like he couldn’t deal with his emotional and physical pain; ultimately, his lowest points propelled him to perseverance.

“Before I did radiation, my leg swelled up like a bowling ball all the way down to my foot. It hurt so bad, it was like knives going down my leg,” Winstead said. “In the middle of the night, I would walk outside while my wife was asleep, and just walk and walk. I would get on my knees and just pray to God because it was the worst pain ever. I wish that upon nobody. I got to the point where I was just crying and crying, and I suddenly told myself, ‘I cannot give up.’”

That’s the message Winstead wants to pass on to anyone who may be suffering: do not give up.

“You have a choice,” he said. “Me, I want to live. And I’m going to live. But to do that, you can’t give up, you have to stay strong, and you have to stay good with God. That’s what’s helped me through all of this up until this point: the good Lord above and everybody around me who’s supported me. Let me tell you, I had so many days where I just wanted to completely give up. I wanted to quit the fight. But I stayed strong and I stayed empowered by everybody around me, and that’s what you have to do. You can beat this.”

Through his diagnosis, Winstead has realized what truly matters is simply living.

Today is Day Zero for Jeff Winstead, so he can use all of your thoughts and prayers. To donate to Jeff's battle, please visit his GoFundMe page.