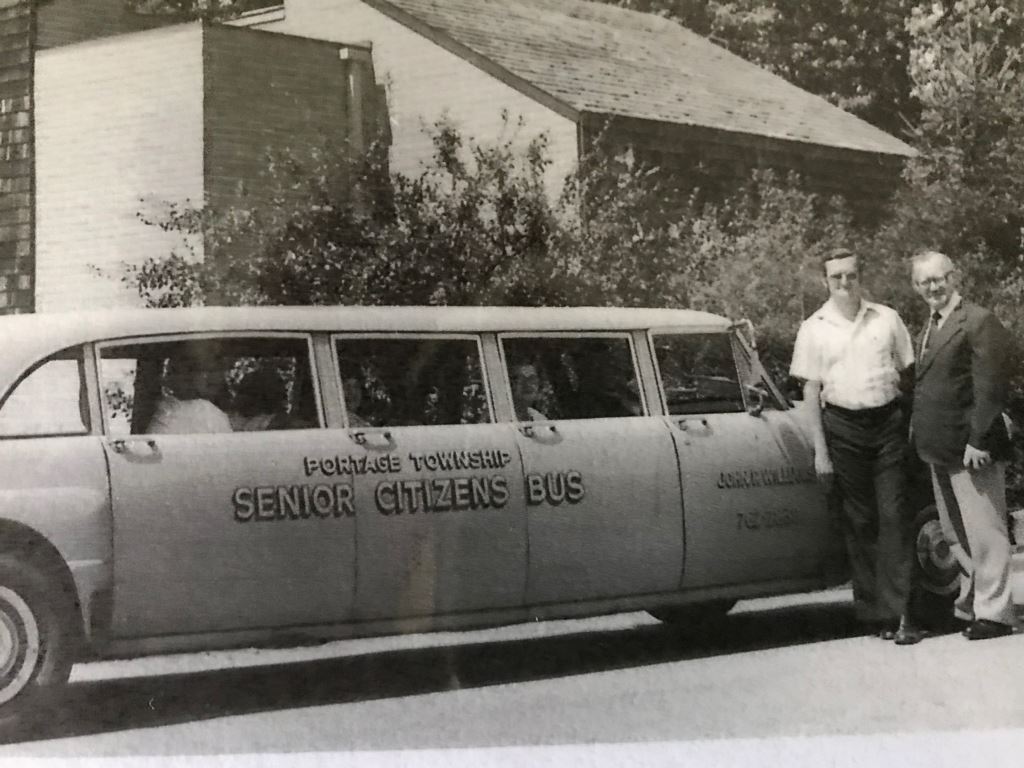 Then Trustee John Williams began offering transportation services in 1978. He purchased a small bus which transported both disabled residents and seniors to doctor’s appointments. He also purchased an old Checker taxi.

Coker said the old taxi was retrofitted to seat 12 to 15 seniors and painted blue and gold. The service provided trips for seniors for shopping and medical appointments.

That same year, Williams and the advisory board, Don Sickles, George Sarnowski and Robert Kish, set into motion the construction of a center which would provide seniors with an array of services and opportunities.

The center was named for Eunice Bonner. Bonner was president of the Portage Senior Citizens Club, which met at various locations, including Woodland Park and a former Portage Township YMCA building on Evergreen Avenue.

Bonner was involved in a traffic collision in early 1978 and died from complications resulting from the collision. Before she died, Williams visited Bonner and, as the story goes, told Williams, “John, don’t forget my seniors.”

Construction of the center began in 1979 and was completed in 1980. Virginia Thomas had been named township trustee following Williams’ election as Portage mayor.

The original approximate 5,000-square-foot building, which included the dining room and office, was opened in July 1980.

In those 40 years, the goal of the center has remained the same, to provide services and opportunities to the senior population of Portage Township.

Director Janet Clem has worked at the center for some 30 years, starting as a substitute bus driver. She was named director about 15 years ago.

“The senior population is younger, both mentally and physically, and they are looking for more active things to do,” said Clem, adding the center works to provide more challenging and active opportunities for members.

The center, with its approximate 1,000 members, still offers transportation services to members, operating three buses which provide rides for members to and from the center each day, shopping on Fridays, transportation to doctor’s appointments and on short excursions each month.

Since the building opened, it too has grown to meet the needs. A kitchen, fireplace and second activity space were added in 1984 and a pool room was added in 1996.

Current Township Trustee Brendan Clancy undertook the largest expansion of the facility with the addition of a fitness room, computer room, four-seasons room and improvements to the kitchen in 2015.

Clem said the next potential project will be construction of an outdoor walking trail through the center’s grounds.

The center, which is hosting a 40th anniversary celebration from 10 a.m. to 2 p.m., Saturday, Sept. 14, continues to offer services.

The center is also a nutrition site. Each day, some 70 seniors enjoy lunch, cooked at the center.

For more information, visit the Portage Township Trustee’s website at portagetrustee.org/bonner-senior-center or its Facebook page at facebook.com/portagetownship/ or call the center at 219-762-1522. The center is open from 8 a.m. to 4 p.m. Monday through Friday.