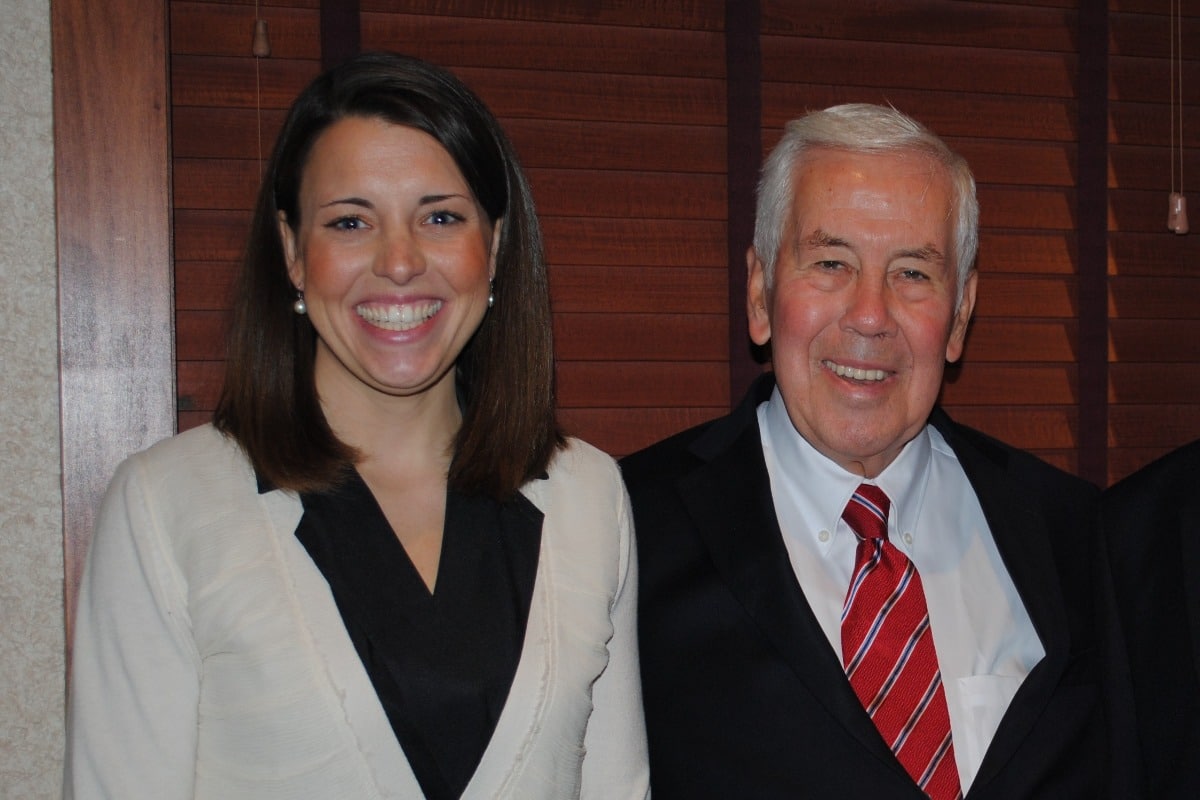 I was a rising high school senior when Senator Lugar’s leadership first fanned the spark of love for this country I’d begun to discover through Girls State. By getting to join a symposium of ideas with fellow students, hosted by Senator Lugar and moderated by thought leaders in policy development, I was enthralled with the complex challenge of serving a country as beautifully diverse as America.  His thoughtful approach shone thru in every session as we evaluated the variety of perspectives on any given issue. Having been inspired by such a tremendous example of service to this incredible, frustrating, and fascinating idea of America I pursued a degree in political science and military service having been inspired by Senator Lugar’s example. I was blessed with the opportunity to intern on Senator Lugar’s team for my semester “abroad” from Purdue in D.C. (which at times felt like a different country than the America I knew in Indiana).  With the daily opportunity to learn the tenets of Senator Lugar’s leadership, it was then my fascination with government became a passion for serving the idea of America.

Some of the lesser known marvels of Senator Lugar that made him so extraordinary:  He read 11 newspapers a day and would circle key articles and facts he wanted to remember.  I know because I filed the stacks of them that would build up in the office.  He met countless people throughout his life in public service...and he remembered them!  His memory for names, facts & details was a wonder; a tool I’m confident was honed when he briefed Admiral Arleigh Burke on daily intelligence reports.

I was one of hundreds of interns who would flow through Senator Lugar’s office, yet he sent notes of encouragement and congratulations at key moments:  when I earned a commission in the Navy, when I filed to run for mayor, when I wrote an article for Howey politics championing our bipartisan class of young mayors, and times when I stood for what my conscience said was right but wasn’t popular.  Those letters then and will forever mean the world to me.  I know I am but one of many who have received such letters from him, fomenting a culture of gratitude and a sense of duty among those whose lives he touched so personally.  They are a tangible example of the legacy of Senator Lugar that I was blessed to experience and be inspired by, and they are a tangible call to continued service of this country and people Senator Lugar loved so deeply.

As a member of the Board of Governors for the Lugar Series I’ve had the opportunity to join an amazing family led by Teresa Lubbers, Judy Singleton, Anne Hathaway and many others who are committed to fostering Senator Lugar’s principles of public service among women leaders.  This organization boasts an incredible roster of 28 years’ worth of Hoosier women leaders and even now is expanding to serve young women in middle and high school through the Next Generation initiative to be similarly inspired with the call to public service.  This commitment to growing future leaders is as central to Senator Lugar’s leadership as any other within the political arena. He knew that true leadership is not collecting more followers, but inspiring more leaders.

Senator Lugar loved his family, Indiana, America and the world by living out that passion with the extraordinary gifts of a curious, nimble, steel-trap mind coupled with Hoosier humility and hospitality.  We’ll miss his presence and thought leadership, but can ensure that the core tenets of what he stood for in Indiana, America and world carry forward.  By investing time in understanding details & policy nuance, as well as investing in each other and faithfully serving the ideals of America embodied in the Declaration of Independence and our Constitution we continue at least part of the unmatched legacy of Senator Dick Lugar.  Well done, sir, and thank you.  We have the watch.