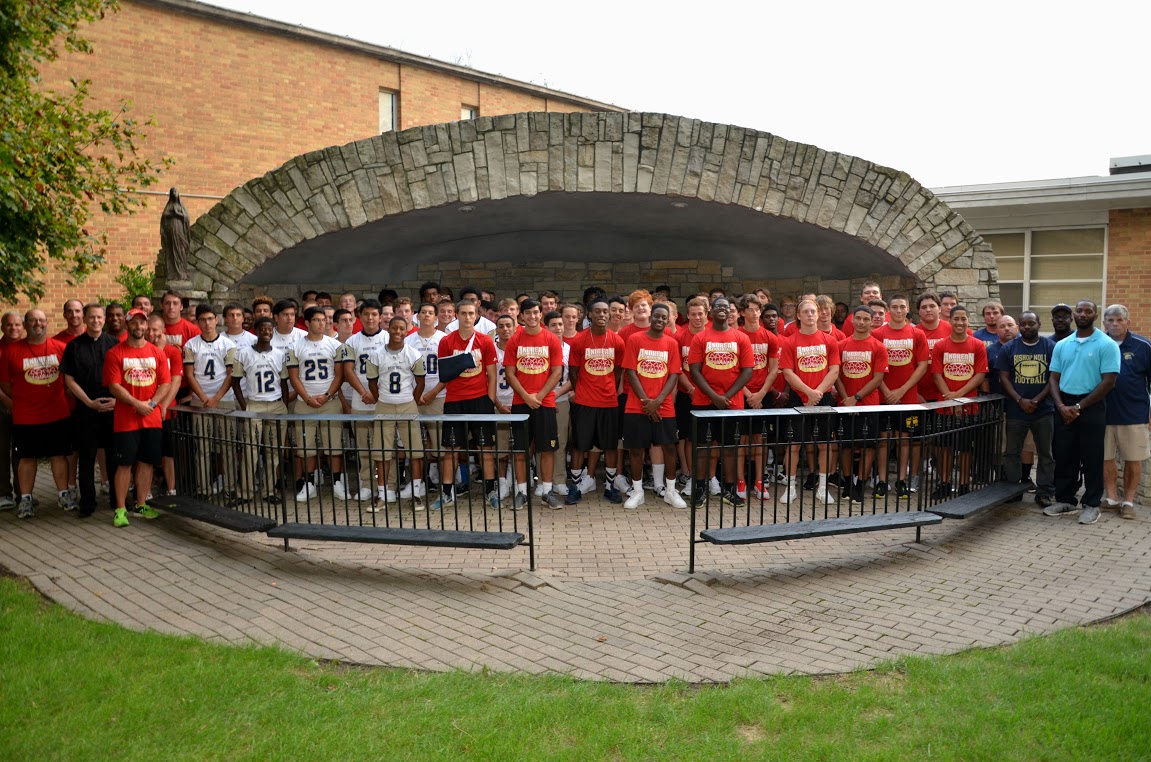 On a Friday night, football can become our entire world. Rival teams square against each other wanting nothing more than to win, while friends, families, and students stand on either side of the two white lines of the field in opposition of their Region neighbors.

Which is why it’s important to remember that no matter how big a game feels like on a Friday night, it is, after all, just a game.

On Thursday night, members of the Bishop Noll and Andrean football team came together for dinner, mass, and a reminder that there are things in this world that are bigger than football.

And for these two Catholic schools in Northwest Indiana, there is nothing bigger than being there for one another as a family and putting Christ above all.

“Bishop Noll and Andrean share a common heritage of excellence in the Catholic tradition within the Diocese of Gary. The combined Mass and dinner, with the football game, reinforce our core values of integrating the mind, body, and soul in Christ,” said Rev. Kevin Scalf, C.PP.S., of Calumet College of St. Joseph, who presided over mass and dinner.

“These are traditions that never graduate.”

The dinner and mass, according to Scalf, are reminders to each school to remember what matters after the final whistle blows tomorrow.

“We celebrate Mass before our football games to see more clearly the intimate connection between athletics and spirituality, and to become the body and blood of Christ that we celebrate. This is important for who we are as Catholic high schools.”

Tonight was also special for the newly appointed Head Coaches of each team, Bishop Noll’s Colin McCullough and Andrean’s Chris Skinner, who became not only new coaches of teams with great long-standing traditions this season, but become a part of a new one as well.

“Obviously this is a special game,” said Skinner. “And it's special to have these two Catholic schools coming together tonight. It was a joint effort and it would be really cool if we could continue to do this.”

“There were a lot of moving parts for this to come together tonight,” added McCullough. “But I really appreciate what we are trying to do and I am happy we were able to make it work.”

The players, coaches, and schools weren't the only ones involved in making this evening happen tonight, the players’ parents, in a show of solidarity with the schools, were the ones who prepared the dinner this evening.

“I think it’s important to support the schools, said Andrean mom, Heidi Mantel. “I think it's nice to have the fellowship and the bonding here.”

“Band of brothers is what's on their shirts, and that's what we’re becoming tonight,” added Mantel.

Although, Mantel added, there might be a little difficulty deciding on who to root for tomorrow for one Mantel.

“I'm the parent of Michael Mantel on Andrean. Michael’s dad, Mike, went to Bishop Noll. Of course, he's always going to be cheering for Andrean, but, you know, he will always be a Warrior, too.”

Make no mistake, every player on Andrean and Bishop Noll wants to win tomorrow, that’s the nature of competitive sports. But before the first whistle on Friday, they will come together once again to pray; united as friends and family, remembering that it’s just a game.