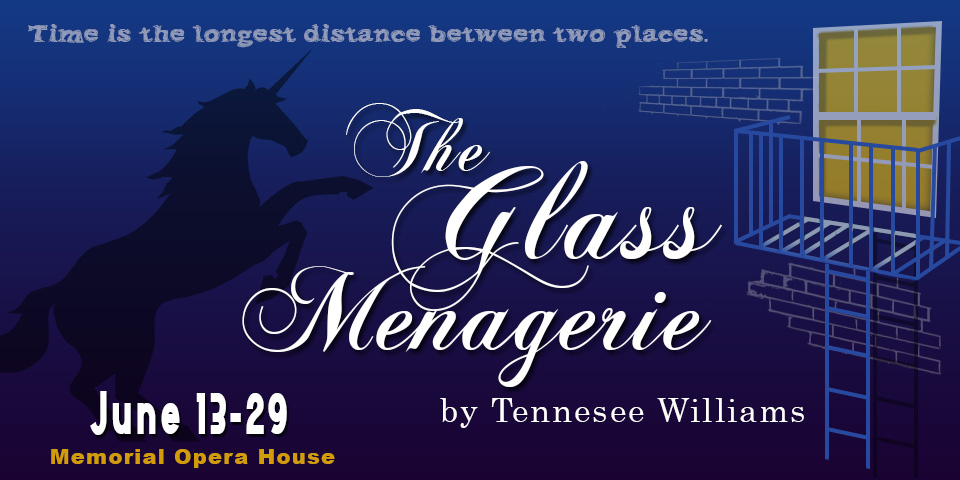 Auditions for Tennessee William's "The Glass Menagerie" will be held Monday, April 28th and Tuesday, April 29th, at 7:00 pm at the Memorial Opera House. The show will take place June 13 through 29, 2014.

Please come dressed professionally and prepared to read from the script. We are looking for actors in the age range from 20 to 60 years of age.

Initially the rehearsal schedule will consist of Monday through Thursday evenings 7-10pm. Additional rehearsals may be added at the director's discretion.

Tom (25-35 years old)- Son of Amanda and the father and younger brother to Laura. He is the narrator of the play, which he is telling to his long lost father. A poet with a job in a warehouse, he longs for another life far from his home and the future his father left for him when he took off. He does what he has to do without pity but wishes for a different end. It is also implied that he is a closeted homosexual but, unable to act on his desire, he escapes to the movies.

Amanda (40 -50 years old)- The Mother of Laura and Tom who thinks she is doing what is best for her children after the man she loved left her and never returned. She is a southern bell who longs for the time when she could charm her gentleman callers and wonders why her daughter can’t do the same. She is unwittingly cruel but with a purpose. Always above everything else, she thinks she is right in her choices. You can sometimes see Amanda escaping into her own fantasies and illusions of the past.

Laura (20-25 years old)- Daughter of Amanda and the Father, older sister to Tom. A childhood illness has left her crippled, one leg slightly shorter than the other and held in a brace. Branching from this, she is withdrawn and becomes like one of her pieces of glass, too exquisitely fragile to move from the shelf.

The Father (50-60 years old)- Father of Laura and Tom, husband of Amanda. He left his family years ago and left Tom to take care of the two women. Being that this is a memory play, Tom finds the Father in the future and tells him the story about what happened the days leading up to Tom’s departure. Tom, like his father, leaves when things don’t seem to go as they should.

Jim (20-25 years old)- The gentleman caller who is Tom’s friend (possible obsession) at the factory and who went to school with Laura. He is a typical, self involved 20 something male who is not in tuned to what is going on around him.