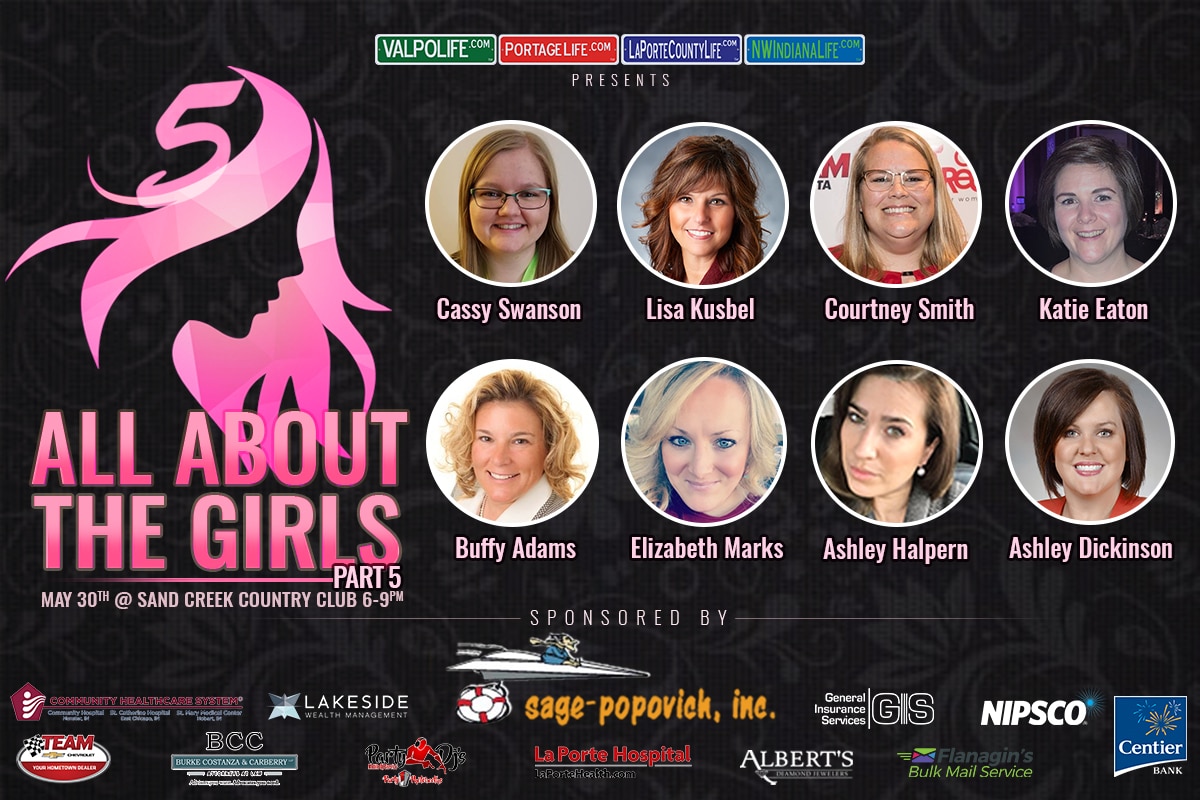 It’s happening again! The rousing All About the Girls (AATG) event presented by Ideas in Motion Media promises an evening of fun and inspiration from the minds of some of Northwest Indiana’s strongest women. Courage Over Comfort is the year’s theme, a perfect match for the event’s 5th anniversary.

“I love courage over comfort because it gets to the core meaning of All About the Girls,” said Jenny Craig Brown, executive team leader at Ideas in Motion Media and founder of the AATG event. “It doesn’t matter if you have stepped out of your comfort zone for something small, or something huge, or whether it’s for professional or personal reasons. Using courage over comfort to accomplish anything is noteworthy, and we are going to celebrate that in a big way with All About the Girls Part 5.”

Cassy Swanson has practiced courage over comfort throughout her life, mostly through work that ties to a close personal mission of helping others and changing the world for the better. Cassy earned her undergraduate degree in public relations at Ball State University. While working for Teach for America to help children in under-resourced public schools, she simultaneously pursued and attained a Master of Arts in Teaching from Marian University in Indianapolis. Cassy later returned to Northwest Indiana to work for the Healthcare Foundation of La Porte in support of making her hometown a healthier place. She recently transitioned to a new job: Family Case Manager with the Department of Child Services in Porter County, where she supports children and families in need. Cassy lives in Valparaiso with her fiance Evan and their cat Winifred and dog Auggie. Cassy volunteers with the La Porte Jaycees and regionally with Sigma Kappa Sorority.

Lisa Kusbel hung up her flight attendant wings after 25 years in the airline industry, crawled out of her comfort zone, reinvented herself, and adopted two new careers in the process. Born and raised in Northwest Indiana, she now works as a real estate agent with Realty Executives Premier (for Mike Tezak, managing broker), and also is the Director of Development for Valpo Parks Foundation (for director John Siebert).  So far, she loves every minute of her new professional life, and credits her husband, Frank, and three children Matthew, Lauren, and Jacob as her biggest fans and supporters. Lisa and her family live in Valparaiso and take great pride in their community by volunteering, and attending events that support the many non-for-profits throughout city.

“All About the Girls is such a great way to end the work day. You can grab a tasty beverage and some light snacks and just unwind. You’re going to laugh, maybe cry a little - but the good cry - and you’re going to meet new friends who are all on the same road as you even if you have wildly different backgrounds and circumstances,” said Stacey Kellogg, editorial director at Ideas in Motion Media. All tickets include appetizers, beer, and wine.

Courtney Smith is a courage-over-comfort veteran, having started her courageous journey when she became a single mother at age 19. Determined to show her daughter strength and resilience, Courtney obtained two bachelor’s degrees before marrying her husband and starting a teaching career in the School City of Hammond. When she was 33, her father passed away. Courtney’s father had told her she could be anything she wanted, and she believed him. With her husband and two children supporting and cheering her along the way, Courtney obtained a law degree and has been a practicing family law attorney ever since. As a strong community advocate, Courtney has provided more than 120 hours of pro-bono legal services to the Northwest Indiana Volunteer Lawyers and the Indiana Coalition Against Domestic Violence. She is a member of the Women’s Law Association, and the bar associations in the state of Indiana, Lake County and Porter County. Courtney serves on the executive leadership team with the American Heart Association and is the Vice President of the Shared Ethics Advisory Commission. She has been featured as a Life in the Spotlight by NWIndianaLIfe.com, awarded the Duneland Chamber of Commerce Ambassador of the Year award, and regularly volunteers with senior living facilities in the area.

Katie is a graduate of Michigan City High School and attended Purdue University Northwest where she earned a bachelor’s degree in English and communications, and later a master’s in business administration. Katie is president of the Purdue Northwest Alumni Community Board of Directors, an active member of the Michigan City Rotary Club, and a community volunteer. She was listed in the NWI Times 20 Under 40 for 2018 and received the NWI Influential Women Award in the category of Up & Coming in Economic Development in 2018. She lives in Michigan City with her husband Jeff and their three children. Outside of work, Katie enjoys outdoor activities such as running, biking, hiking, traveling, community activities, and spending time with her family.

Introducing our next All About the Girls guest speaker, Buffy D. Adams, Vice President, Mission Advancement for Boys & Girls Clubs of Greater Northwest Indiana. With a first name like Buffy on her birth certificate, Buffy jokes that she was destined to live a life of courage over comfort. Buffy’s experience as a marketing and communications executive in both corporate and the not-for-profit sectors provides her with unique perspectives from diverse industries that include consumer products, healthcare, technology, finance, entertainment, youth programming/services, professional athletics, and higher education. Whether gambling next to “Princess Leia's mom” at an AMC junket, almost snowboarding off a mountain in Austria, being a missionary in Central America, being held at the Ukraine border smuggling Bibles into Russia, living and working in DC on 9/11, raising $3 million in nine months for Indiana’s LGBTQ+ youth, or being a part of a movement that builds GREAT Futures for more than 12,000 of Northwest Indiana’s children and teens, Buffy will tell you that comfort has always been a warning that an emergency infusion of courage is needed STAT. You won’t want to miss Buffy sharing the ingredients of her not-so-secret “courage over comfort” sauce!

Elizabeth Marks has had plenty of opportunity to work courage over comfort into her vibrant life. She’s a mother of twin girls, soon-to-be stepmom of four, a sister, a daughter, a friend, a fiancé, and a volunteer – and that’s just in her spare time. Professionally, Elizabeth has been the Director of Strategic Development at Lakeside Wealth Management Group for nine years, and a member of the Duneland YMCA Executive Board of Directors for four years. A Chesterton native and graduate of Valparaiso University, Elizabeth describes herself as a lover of all things vintage, including old movies. She is a pianist, enjoys working out, and loves to decorate homes. But most of all, she loves learning with her kids and is proud to exclaim, “They are my world!”

It takes just a wee bit of courage over comfort to design jewelry that will ultimately be a person’s lifetime keepsake for milestone events. Ashley Halpern, Chief Designer for Albert’s Diamond Jewelers, can attest to that. She also has designed her life around giving back to her community. Halpern volunteers with several charity organizations throughout Northwest Indiana, and spearheads a service league, led by children, called KidsCare NWI. Prior to her position at Albert’s, Ashley worked as a corporate training director and a special education teacher. She holds a master’s degree in education from Indiana University. Ashley lives in Munster with her husband, Josh, and their two children, Aaron and Tory.

Aside from overseeing a community’s first new hospital build in more than 40 years, Ashley M. Dickinson, Chief Executive Officer for La Porte Hospital, is laser focused on running two hospitals and a large physician network under three main premises: quality, safety, and service. Working in healthcare, as an executive, no less, takes a LOT of courage over comfort. Ashley, who also serves at CEO of Starke Hospital, holds a master’s degree in Health Administration and Business Administration from the University of Alabama at Birmingham, and a bachelor’s degree in Finance from Oklahoma State University. She is a Fellow in the American College of Healthcare Executives. During her two years at La Porte she has overseen the planning, groundbreaking, and now construction of the new La Porte Hospital that will open in 2020, recruited over 30 new providers to La Porte and Starke counties, and earned La Porte Hospital designations as a Chest Pain Center and a Primary Stroke Center. Prior to joining La Porte, Ashley served as Chief Operating Officer at Porter Regional Hospital, and an executive at Northeast Regional Medical Center in Kirksville, Missouri. Ashley and her husband Patrick live in La Porte County.

Registration is now open for All About the Girls Part 5. The event is capped at 300 people, so early bird registration is encouraged. Early Bird tickets are $30 until April 15. After that, tickets go up to $40. Tickets can be purchased online allaboutthegirlspart5.eventbrite.com For pricing and information on purchasing a full table of 10, contact Stephanie Swearington at stephanie@greatnews.life or at (219) 707-5023.

Sponsorships are still available for the event! Show us how your business supports courage over comfort and celebrates our region’s strong women. To be a featured sponsor, email Jenny Craig Brown at jenny@greatnews.life or Candace Arvin at candace@greatnews.life, or call either of them at (219) 707-5023.

Check out last year’s All About the Girls event coverage to see what the party is like!