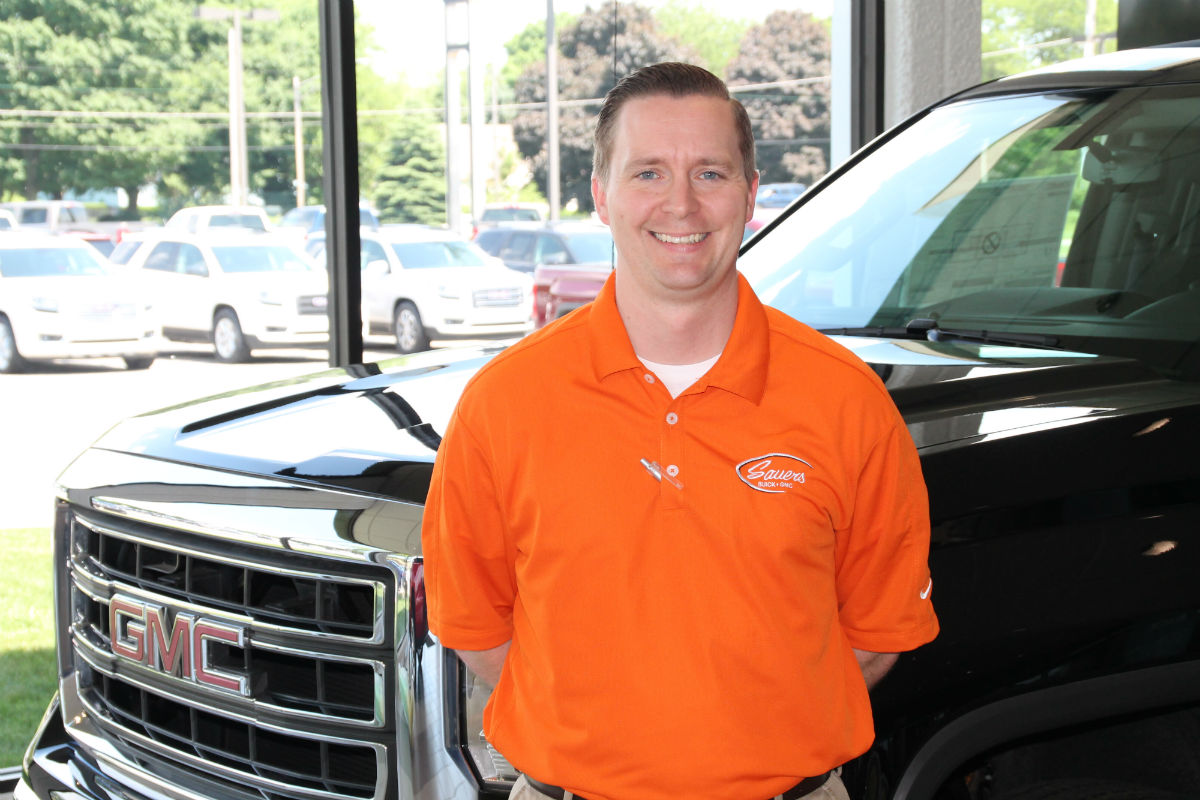 Adam Howland is the Business Development Manager at Sauers Buick GMC. Technically, he is in charge of client relations and communications from the time someone first contacts the store, all the way through the duration of that customer’s relationship with Sauers. Even well after they have purchased a car or service.

Off the record, though, his real official title is…

In other words, to say he wears a lot of hats would be an understatement.

Doing all these jobs takes a lot of hard work, discipline, and organization. And this get-it-done mentality in Howland is something he credits to his years of active service in the Navy, and still, to this day, his service in the Naval Reserves.

“At first, I didn’t want to join the military. I didn’t like the idea of someone telling me what to do all the time,” Howland said about his decision to join the Navy. “But I went to a technical school for a few years after high school and decided it wasn’t for me. After that, I figured it was time for me to do something.”

Howland grew up in Virginia Beach, Virginia, and his parents were both in the Navy there, so he decided that would be the logical choice for him as well. And despite his initial hesitance to join the military, he now says it is the best decision he ever made in his life.

During his years in active service he got to travel the world, run up the Rock of Gibraltar, experience new cultures, and also get the discipline and work-ethic that was a huge difference maker when he and his wife decided to move from Virginia to New Carlisle, Indiana.

“My wife is from this (Northwest Indiana) area, and that’s why we decided to come up here when we left Virginia,” Howland said. “I was a little worried when I left the military and moved 900 miles away to a different state without a job, but the military gives you that confidence to take on anything.”

Still, though, there’s one thing about Northwest Indiana that Howland said the military did not prepare him for.

“The snow. I am still getting used to all this snow up here.”

Yet rain, sleet, or snow you’ll find Howland at Sauers running around the store and maintaining great client communications with a smile.

Well, except one weekend and month and two weeks a year when he is fulfilling his duty as a Naval Reservist. But that’s ok with Sauers, Howland says.

“Kim Sauers, the owner here, is absolutely great about working around my schedule, and is very supportive of my duty in the Naval Reserves,” said Howland. “Which is great, because when I am at drill you learn that not all bosses are as accepting.”

But Kim is that accepting, and perhaps that is why Howland says he is happy to wear that many hats at his job at Sauers and  work hard for a company he loves.