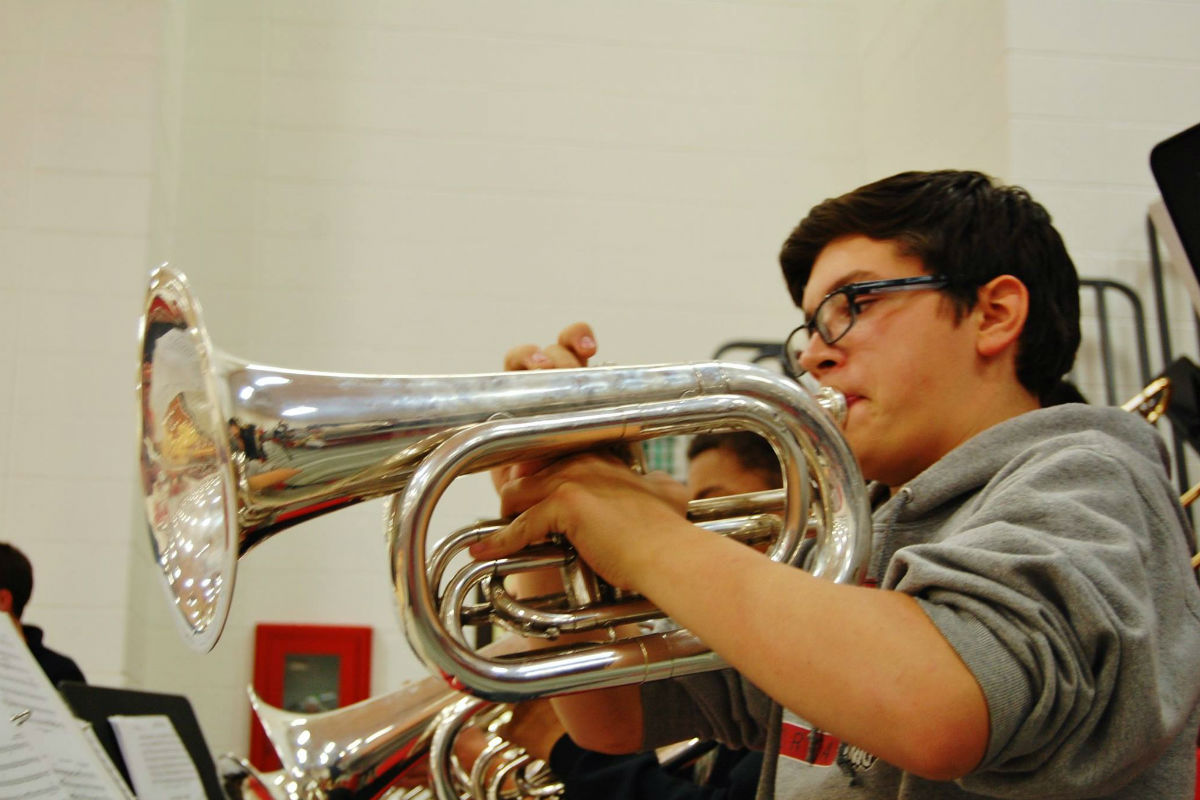 Portage sophomore Xander Walker may not play a sport, but this week’s Life in the Spotlight is getting his chance in the professional world in what he calls, “The NFL of marching bands.”

Earlier this month, Walker was offered a contract to march with the Milwaukee, Wisconsin drum corps, the Pioneers. He earned the position after three years on the Pride of Portage Marching Band and a weekend-long audition in Wisconsin. Starting Memorial Day, he will spend a month at the Pioneers base before traveling all over the country this summer.

The tryout included both playing music and a visual marching session.

“It’s always been my dream to audition for a drum corps, and I really wanted to make it so I was really nervous about it,” Walker said. “It was really nerve-wracking but it was really exciting at the same time because you meet a lot of cool people, and I was doing what I loved.”

When he entered the audition, Walker’s initial thought was, “this is nothing like marching band at home.” His audition started, it seemed to him, the second he walked in the door.

The challenge made the reward even sweeter.

“The first thing that came to my mind [when I found out I was in] was that all the work I put forward has paid off,” Walker said.

That hard work began when Walker picked up the baritone his sixth-grade year.

“I always felt I was musically talented,” Walker said. “I picked up the baritone and I just played it well, and he told me I was natural and I should play it, and I did, and I enjoy it a lot.”

After that, Walker’s career really took off when he started marching band during eighth grade. As a younger student, it was difficult to be around musicians with more experience, but Walker wanted to make it work.

“I felt like people looked down upon me because I was such a little baby compared to everyone else, but even as an eighth grader I still proved myself,” Walker said. “When I marched I didn’t look like I was a little kid, I looked like a high schooler in a high school marching band.”

According to Walker, Fegely Middle School band director Chad Brinkman as a brass technician for Carolina Crown, an elite corps, and the former was inspired to follow in the footsteps of the latter.

One of the major differences between Pride of Portage and the Pioneers is that, as a drum corps, Pioneers lacks woodwinds, which Walker said gives the group a much different sound.

He will also be traveling much more than he does with the high school’s marching band.

This year’s show for the Pioneers is centered on Joan of Arc. Although he has to wait until May to truly begin, Walker already has the first two movements of music.

“I’ve been practicing since I got them,” Walker said.

When not practicing his Pioneers music, Walker also plays for the Pep Band and Symphonic Band.

Outside of band, Walker enjoys participating in theater, where he works as a techie and sometimes works the light board for high school shows.