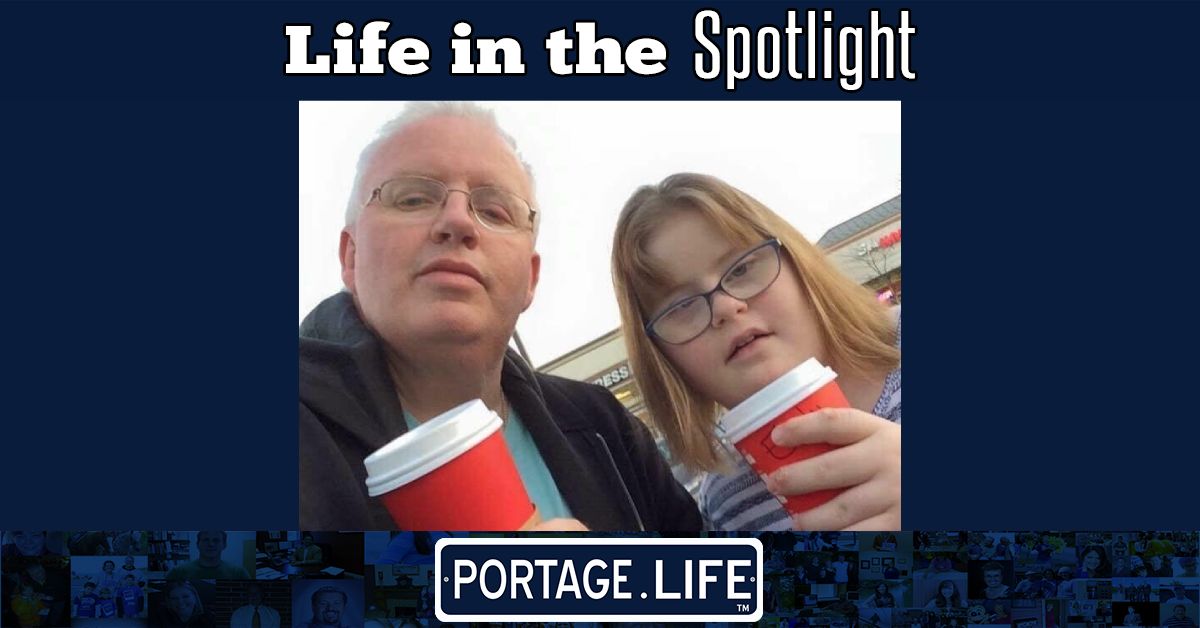 Everybody has the ability to make a difference in the world, whether that impact is as small as donating a few dollars to charity or as big as traveling around the world to volunteer. However, not everybody has the opportunity, or strength, to open their personal lives to the public in order to teach people about something important. Tom Felter Jr. and his daughter Emily Felter have done exactly that to help make the world a safer place for people with disabilities.

Tom Felter Jr. has lived in Porter County since 1970 and has worked in emergency services in one way or another since 1985. He’s been everything from a volunteer firefighter to a police dispatcher to an EMT. He is currently a paramedic, making a huge difference in the community. However, despite everything he’s done, Tom Felter Jr. would tell you that the most important thing he’s ever done is be Emily Felter’s dad.

Emily Felter is 27 years old, and she was born with Down Syndrome. She absolutely adores jamming out to Taylor Swift and loves riding her three-wheeled bicycle all over the place. She lives happily with her mom and dad in Porter County—she even has her own little “apartment” where she gets to hang out, watch TV, and just be herself. However, the most important thing Emily Felter has done is teach thousands of people about patience through her and her dad’s project The Emily Talk.

The Emily Talk was partially inspired by Tom Felter Jr. being both Emily Felter’s dad and a paramedic—he was able to see that many people don’t understand how to talk to people like Emily Felter and decided that needed to change. However, what really inspired Tom Felter Jr. and Emily Felter to start The Emily Talk was a heartbreaking incident that happened in Maryland in 2013. Ethan Saylor, a young man who was born with down syndrome, was accidentally killed when three off-duty police officers who were acting as movie theater security tried to remove him for not having a ticket.

Tom Felter Jr. heard about this tragedy and decided it was time for emergency responders to properly learn how to talk to people with disabilities.

“Because of Ethan and because of my dual role as Emily’s caregiver and as an emergency responder, it was obvious that what I could do was talk to other first responders and introduce them to Emily and try to get them to understand,” said Tom Felter Jr.

The first Emily Talk was held in 2015 and was geared toward first responders. Since then, however, Tom Felter Jr. and Emily Felter have branched out and are trying to educate people from all different careers. Recently, they attended a NIPSCO safety conference and talked to over 600 workers about disability awareness.

“I try to reach out to any type of group because those people are out in the community and those people have jobs where they might encounter Emily in a professional capacity. They may never encounter someone like Emily or someone on the spectrum, but if they do, they now have a little bit of information to work with, and that encounter is going to go much smoother I think,” said Tom Felter Jr.

Tom Felter Jr.’s favorite part of the Emily Talks is getting people engaged. He doesn’t want to stand up and lecture people—he wants people to ask questions and engage in conversation, not just with him, but with Emily Felter. He wants people to get experience talking to individuals with disabilities in laid-back settings so that when the time comes, they’ll be prepared.

There are so many things Tom Felter Jr. loves about being Emily Felter’s dad, but one of his favorite things is what she’s taught him about showing patience and kindness to other people. Everyday things that would normally make a person upset don’t bother Tom Felter Jr. the same way they used to before having Emily Felter. He’s learned to show empathy for others in a way he couldn’t before.

The Emily Talks have already made a huge difference in the community, but what’s making an even bigger difference is Carmen Vincent’s documentary, “The Teacher of Patience,” which follows the lives of Emily and her family and shows people what life with a disability truly looks like. Tom Felter Jr. is incredibly grateful to Vincent for helping him and Emily achieve their goal of spreading disability awareness, and he hopes that word about the documentary will continue to spread and make a difference.

“I could go on and on and on about how involved Carmen has been in our family and the impact this film is making on our lives and hopefully other people's lives. I want people to see that film and get a glimpse of what goes on in our house,” said Tom Felter Jr.

Tom Felter Jr. and his daughter Emily Felter have had an immeasurable impact on the conversation of disability awareness. Without these two fighting to make a difference, the world wouldn’t be as bright of a place. To learn more about this father-daughter duo and their Emily Talks, visit https://www.theemilytalk.com/.