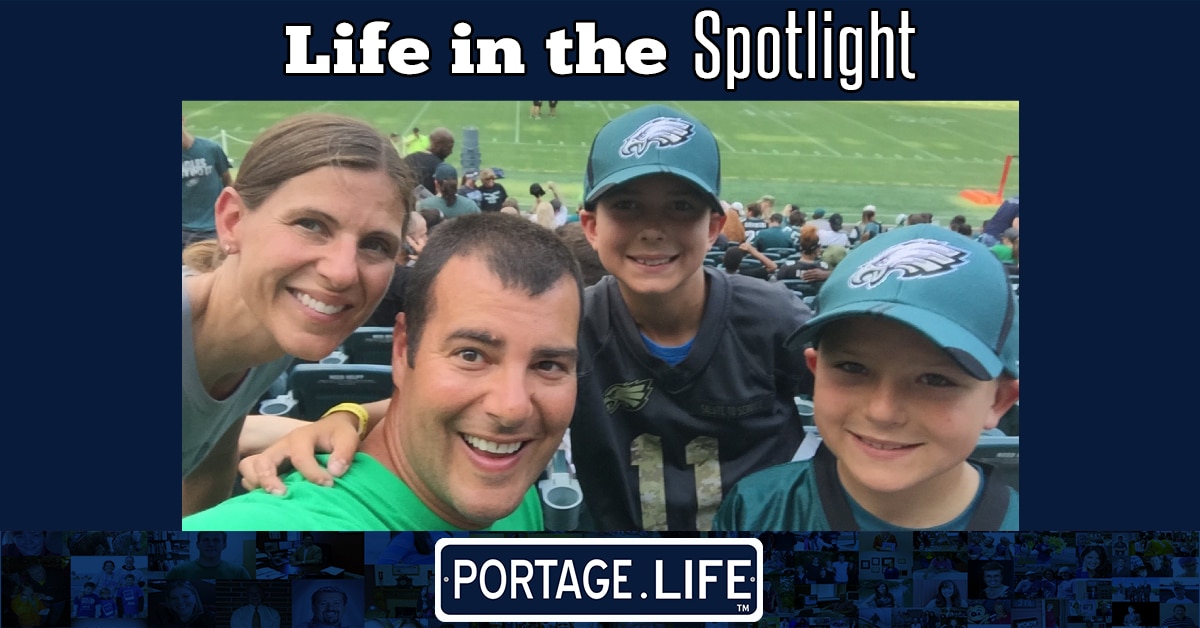 As one of the busiest and most popular locations in Portage, the Starbucks on US-6 requires the steady hand of a manager who understands both the business and the human elements of the industry. Thomas Kinsey is adept in both, and after almost 15 years managing this particular Starbucks, he still finds ways to connect the business to the community in meaningful ways.

Kinsey relocated to Portage from Philadelphia when he was in high school, then returned again after college in 2002. He married his wife Stacey, who is also from the area, and they chose to raise their two boys, Carson and Liam, here, too.

“The steel industry brought both my wife’s and my family to the region. We have not only chosen to make it our home, but much of our extended family has also chosen to stay. We love the Midwest,” Kinsey said.

Before he came to love the Region in later years, Kinsey had trouble adapting to the change of home base in his teen years. This struggle would inform many of his later decisions, and his affinity for caring for others.

“When I was a teenager, and moved to the area, I experienced depression and anxiety throughout my junior year due to the move. With therapy, friend support, and family, I learned to cope with it,” he said.

Kinsey chose to study psychology in college, graduating from Miami University in 2002, motivated by his own experience struggling with mental health. After graduating and returning to Indiana, Kinsey worked as a group therapist with the chronically mentally ill and elderly for five years.

“I enjoyed the work, but was looking to find a company that allowed me to care for others and also learn how to build a profitable business. Starbucks was the answer,” he said.

Kinsey had already been invested in the company as a customer; becoming a manager felt like a natural step.

“It was a circuitous route, but I really feel like I am where I belong,” Kinsey said. “I always had a passion for Starbucks coffee, since I had my first Mocha Valencia at the original store in Hobart in 1996.”

With his first passion for advocating for those struggling with their mental health close to heart, Kinsey invested himself in establishing a welcoming space for Portage residents and those beyond.

Though providing quality coffee products is the first goal Kinsey and his team Starbucks work to achieve every day, Kinsey has also helped to spearhead a variety of initiatives that support other important facets of Portage.

For instance, Kinsey said, every day, they donate all of their uneaten pastries and ready-to-eat items to the Salvation Army of Porter County. When the COVID-19 pandemic caused Kinsey’s Starbucks location to close its doors, they donated all their extra food and milk to the surrounding Portage community through Portage Township Schools’ meal distribution programs. Kinsey connected with Portage High School advisor Nicole Sliger to help distribute the items.

Additionally, Kinsey and his crew also have donated many hours to clean and build Haven Hollow Park just outside of South Haven.

“We plan to have events that build the relationship with law enforcement and the Portage community in the future,” Kinsey said.

The Starbucks on US-6 is reopen now, and Kinsey said he and his team are all thrilled to be serving the community once again. For his part, Kinsey’s favorite Starbucks drink is either a nitro cold brew or six blonde espresso shots over ice—no cream, no sugar.

Kinsey is always prepared to see a difficult situation through, and it’s not just because he’s well-caffeinated. His own championship of depression and anxiety is never far from mind, and another life-altering experience further colored his perspective.

“My second son, Liam, was born eight weeks early, and we almost lost him,” Kinsey said. “He spent six weeks in the NICU, and not only survived, but 10 years later is an amazing young man! We pulled together as a family to make it through the stress and uncertainty of his birth, and grew stronger because of it.”

Bolstered by his family’s strength, Kinsey has learned to look inward for the sake of his own strength and support for others.

“I discovered meditation about three years ago, and it has been life-changing for me,” he said. “It allows me to focus on the present moment, and be more responsive to others’ needs and feelings.”

One of the only things he takes as seriously as his passion for mental health advocacy, running a cornerstone business, and family is his affinity for sports.

“I am a Philadelphia sports fanatic. Being from the Philly area originally, we are huge Eagles and Sixers fans and even named our golden doodle Philly!” he said.

But for Kinsey, family, both immediate and extended, is never taken for granted.

“Every summer, my family travels to the Jersey Shore, to Stone Harbor or Avalon. Not just our family of four, but full extended—brothers and their families, parents, aunts, uncles, and cousins. We have been going since my grandparents started heading down there decades ago. It still feels the same,” he said.

“Our favorite tradition,” Kinsey said, “is building a huge sand castle at low tide. All of the family members have different roles...and it takes hours. We then all watch as the tide comes in and destroys it. It’s an amazing and fun experience.”

Next time you stop in at the Starbucks on US-6, keep your eye out for Kinsey.